NHL Buzz: Toews skates with Blackhawks, no timeline for return 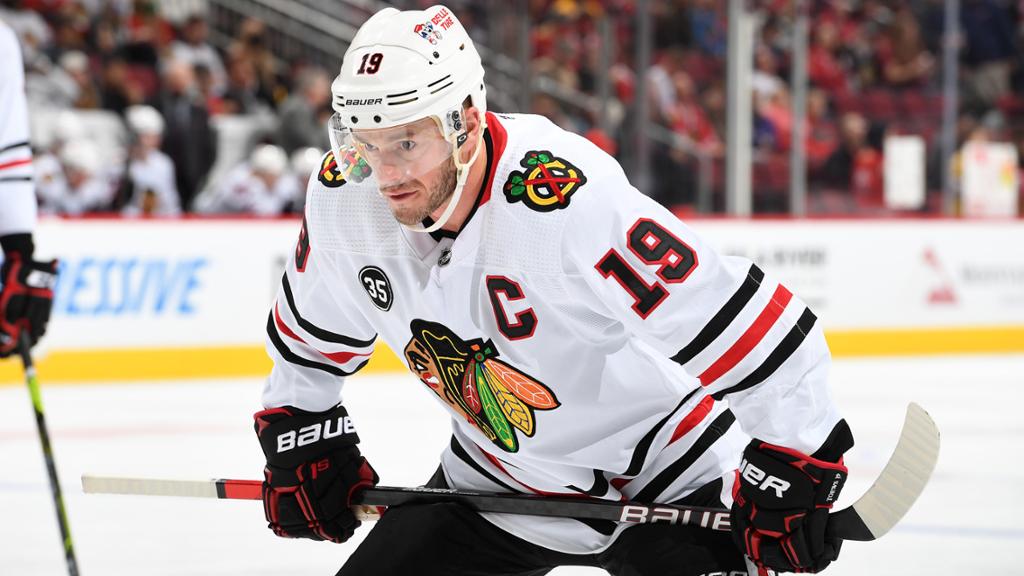 Welcome to the NHL Buzz. Throughout the 2021-22 season, NHL.com will have you covered with the latest news.

Jonathan Toews skated with the Blackhawks on Friday for the first time since being placed in concussion protocol on Jan. 28.

The forward took part in Chicago’s full 30-minute optional practice. He was placed on injured reserve Friday, retroactive to Jan. 26, when he had an assist in an 8-5 win against the Detroit Red Wings.

“I saw [Toews] this morning, I just said, ‘Love having you around,'” Blackhawks coach Derek King said. “We need it, we need a guy like that just kind of hanging around and just seeing him in the locker room is good for the guys.”

King said the Blackhawks will continue to monitor Toews, who has scored 19 points (four goals, 15 assists) in 43 games this season.

Noel Acciari will make his season debut for the Panthers against the Minnesota Wild (8 p.m. ET; ESPN+, HULU, NHL LIVE).

Acciari injured his pectoral muscle in a preseason game against the Tampa Bay Lightning on Oct. 5. He had surgery on Oct. 12 and returned to the ice (non-contact) in November. Acciari was sent to Charlotte of the American Hockey League for a conditioning sting on Feb. 2 and has been participating in full practices for the past few weeks.

“I’m excited for him,” Panthers coach Andrew Brunette said Friday. “I think he really put the time in to rehab and it wasn’t an easy process. … We’re excited to have him back. He’s a big part of our group.”

“He’s been champing at the bit,” Brunette said. “He put the time in here, so it’s awesome for him to get back as quick as he has.” — Jessi Pierce

Cole Perfetti will be out for the Jets longer than day to day, coach Dave Lowery said.

The rookie forward left in the third period of a 5-3 win against the Seattle Kraken on Thursday after a check from Jamie Oleksiak, and will not play against the Edmonton Oilers on Saturday.

Andrew Copp is day to day with an upper-body injury sustained on a hit from Minnesota Wild forward Jordan Greenway in a 6-3 win on Wednesday. Copp did not play Thursday and isn’t expected to play Saturday. The forward has scored 28 points (12 goals, 16 assists) in 47 games this season.

Matt Dumba will be out indefinitely for the Wild because of a lower-body injury.

The defenseman sustained a lower-body injury during a 3-2 win against the Carolina Hurricanes on Saturday and did not play in a 7-4 win against the Detroit Red Wings on Monday. He did not travel for their 6-3 loss to the Winnipeg Jets on Wednesday and will not play against the Florida Panthers on Friday (8 p.m. ET; ESPN+, HULU, NHL LIVE).

Wild coach Dean Evason said Dumba likely would not travel with the team for their four-game road trip which begins at the Edmonton Oilers on Sunday.

Dumba missed two games with an upper-body injury prior to last Saturday. He had one shot on goal, three hits and two blocked shots in 22:30 of ice time in his first game back.

Drake Caggiula is out for the season after having surgery for a herniated disk in his neck.

The recovery time is estimated at 6-8 months. The forward hasn’t played since Nov. 22.

“He’s been seeing some different specialists and gathered all the information and then made the decision a few days ago that he was moving forward with the surgery,” Sabres general manager Kevyn Adams said Thursday. “He saw obviously our doctor, got a second opinion and a third opinion just to kind of gather more information. And that’s what he felt most comfortable with.”

Caggiula returned to practice in a no-contact jersey Dec. 19 and practiced until mid-January. He scored two goals with three assists in 18 games this season.

Forward Zemgus Girgensons remains out with a lower-body injury related to a hamstring injury sustained in training camp last season that sidelined him for the season. He has missed seven games.

“He just had to get it under control,” Adams said. “But he’s doing well, so probably still a couple weeks away.”

Forward Vinnie Hinostroza (lower body) is nearing a return to practice after a setback a couple of weeks ago. Forward Jack Quinn has the same injury as Hinostroza and is doing “really well,” Adams said.

Defenseman Will Butcher, who sustained a lower-body injury on Jan. 30 against the Colorado Avalanche, has been skating and is “more on the day-to-day than week-to-week,” Adams said. — Heather Engel

Thomas Chabot is not expected to return this weekend for the Senators because of an upper-body injury.

The defenseman left a 4-1 win against the Washington Capitals on Sunday at 6:30 of the third period after a hit by forward Tom Wilson. He did not play in a 5-2 loss against the St. Louis Blues on Tuesday or a 3-1 win against the Buffalo Sabres on Thursday.

Senators coach D.J. Smith said Chabot likely would miss at least the next two games, against the Boston Bruins on Saturday and the New York Rangers on Sunday.

“He’s arguably the one guy you don’t want to go without,” Smith said Wednesday. “The amount of minutes and the amount of things he does … you have to make sure he’s 100 percent.”