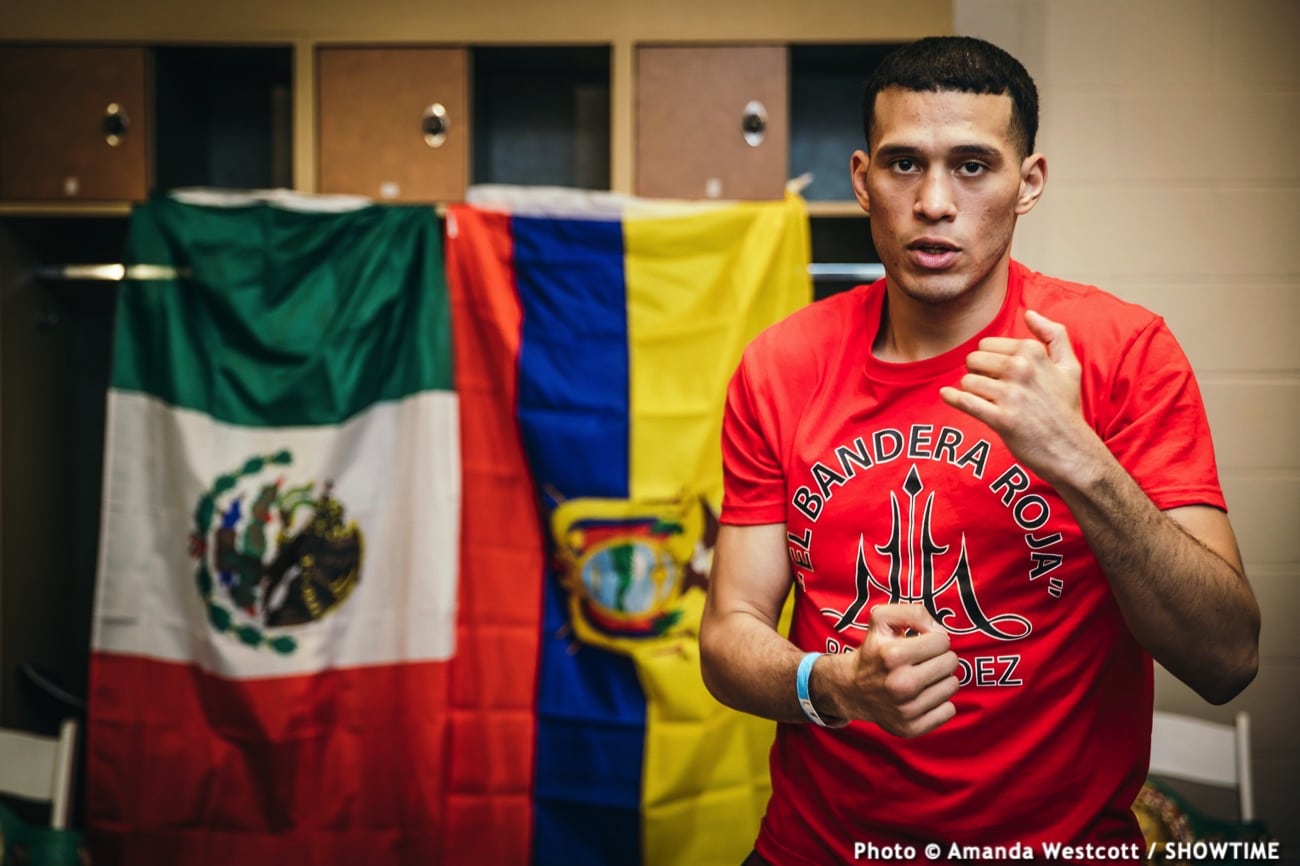 By Dan Ambrose: David Benavidez doesn’t understand why Canelo Alvarez turned down $50 million from PBC recently for a fight between them on September 17th, but he suspects why.

Benavidez hopes to get a fight against Canelo after he completes his two-fight deal.

However, that’s unlikely to be the case because Canelo is expected to challenge light heavyweight champions Joe Smith Jr. and Artur Beterbiev in 2023 to try and become the undisputed champion at 175.

Canelo (57-1-2, 39 KOs) wants the two-fight deal from Matchroom to face Dmitry Bivol and Gennadiy Golovkin. Benavidez thinks Canelo believes it’s the perfect time for him to meet those two fighters.

Bivol came close to losing to British light heavyweight Craig Richards last May, barely winning a 12 round unanimous decision over an average fighter. The scores were 115-114, 115-113, 118-110.

In Bivol’s last fight, he looked slow in winning a 12 round decision over Umar Salamov last December.

“If they were giving him 45 [million] for [Jermall] Charlo, I’m with PBC too. Why do you think they wanted him to fight Charlo first and then me next,” said Benavidez to Fight Hub TV when asked if it’s true the Premier Boxing Champions was offering Canelo $50 million to fight him.

“You see, with Caleb Plant. Okay, a lot of people are going to get at me for saying Caleb Plant is a bigger star than me, but he’s a white fighter,” said Benavidez.

“No disrespect to anybody white, but when Mexican fans see two Mexicans going at it, I’m Mexican Ecuadoran, and he’s [Canelo] Mexican. I’m 25-0 with 22 knockouts. Canelo is Canelo.

“Me and Canelo will be a bigger fight than Canelo and Caleb Plant,” said Benavidez. “How much did they sell? [800,000 PPV buys]. I guarantee you that me and Canelo will sell more just because its facts.

Boxing fans have been waiting to see Canelo fight Benavidez since he first emerged as a threat to him in 2017. That was five years ago, and Canelo still hasn’t shown interest in fighting Benavidez.

It would be one thing if Canelo were fighting better fighters than Benavidez all this time, but that hasn’t been the case.

We’ve all seen the less than spectacular opposition that Canelo has gotten away with fighting in the last four years, and it’s evident that he’s been padding his record.

“I can’t tell you, I’m not on his team,” Benavidez said when asked why did Canelo turn down $50 million to fight him. I just want to stay in my lane; I’m working, doing what I got to do, and I’m trying to get to that next level.

“I feel like he’s going to go with Bivol and Golovkin,” said Benavidez when asked if there’s still a shot that he gets the fight with Canelo on May 7th.

“I feel like this is probably the perfect time to make those fights [Bivol & Golovkin] happen for him, and that’s probably what they’re thinking. Bivol is another champion at 175.

“So, I feel like that what he probably wants to do,” Benavidez said of Canelo. “I think he wants to go up there [175] and get another title and then fight Golovkin. Maybe after that, we’ll get our shot,” said Benavidez about his hopes of getting a fight with Canelo.

In the case of Gennady Golovkin, he’s turning 40 in April and has fought just three times since 2018.

Of the three guys Golovkin has fought since his loss to Canelo, Sergiy Derevyanchenko was the only good fighter of the bunch, and he came close to beating him.

If there was ever a time for Canelo to face Golovkin, it’s now. Waiting until Golovkin is 41 or older will limit Canelo’s credit from boxing fans for beating him.

As it is, Canelo won’t get the credit that he would have due to him waiting until Golovkin turned 40 before giving him the trilogy match that he’s repeatedly asked for in the last four years.