NHL Buzz: Tarasenko out for Blues against Maple Leafs 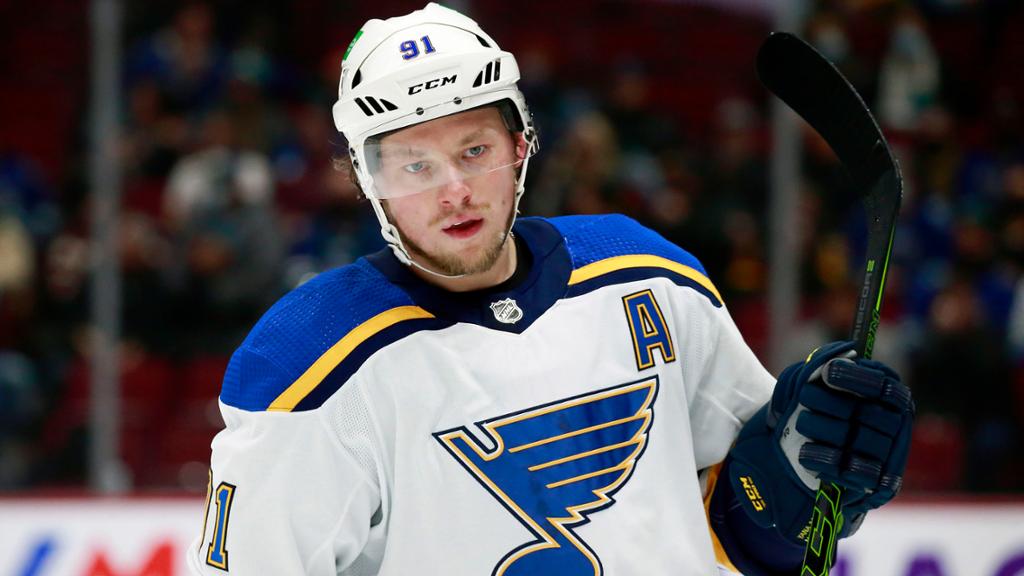 Welcome to the NHL Buzz. Throughout the 2021-22 season, NHL.com will have you covered with the latest news.

Vladimir Tarasenko is day to day with an undisclosed injury and will not play for the Blues against the Toronto Maple Leafs on Saturday (7 p.m. ET; NHLN, SN360, CITY, SNO, SNW, SNP, BSMW, NHL LIVE).

Blues coach Craig Berube said the forward sustained the injury in a 3-2 overtime loss to the Montreal Canadiens on Thursday. He had an assist and three shots on goal in 18:58 of ice time.

Jordan Kyrou will replace Tarasenko at right wing on a line with center Robert Thomas and left wing Pavel Buchnevich.

Ben Chiarot could return to the lineup for the Canadiens against the New York Islanders on Sunday.

The defenseman was expected to be out a week because of a lower-body injury sustained in a 2-1 loss to the Columbus Blue Jackets on Feb. 12.

Brandon Carlo will be a game-time decision for the Bruins against the Ottawa Senators on Saturday after taking a skate to the wrist during practice.

The defenseman skated off the ice holding his left wrist after falling on goaltender Linus Ullmark‘s skate during a penalty kill drill and needed stitches.

“He’s going to get it taken care of,” Bruins coach Bruce Cassidy said. “We’ll see how he is tonight. Obviously, it’ll be a comfort thing and how deep the cut is.”

Jonathan Toews skated with the Blackhawks on Friday for the first time since being placed in concussion protocol Jan. 28.

The forward took part in a full 30-minute optional practice. He was placed on injured reserve Friday, retroactive to Jan. 26, when he had an assist in an 8-5 win against the Detroit Red Wings.

Toews did not play in a 1-0 shootout loss to the Dallas Stars on Friday and is not expected to play against the Florida Panthers on Sunday.

“I saw [Toews] this morning, I just said, ‘Love having you around,'” Blackhawks coach Derek King said Friday. “We need it, we need a guy like that just kind of hanging around and just seeing him in the locker room is good for the guys.”

King said the Blackhawks will continue to monitor Toews, who scored 19 points (four goals, 15 assists) in 43 games this season.