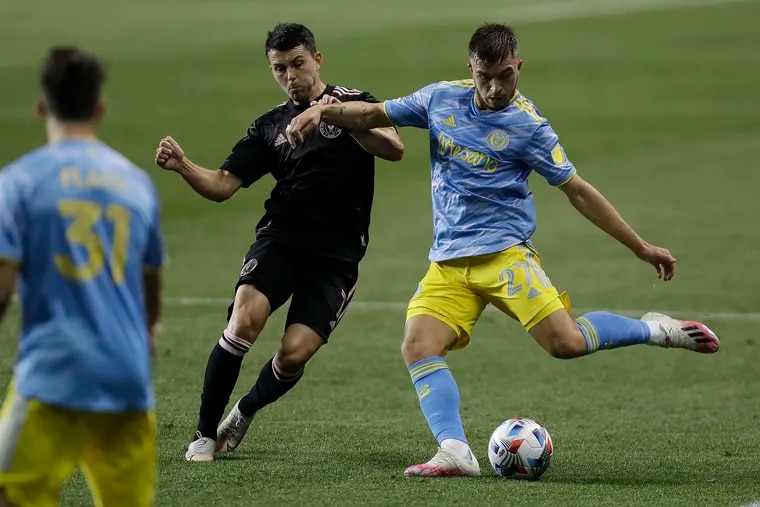 Kai Wagner knows his name was in the news a lot during the Union’s brief offseason. After all, he put it there.

Just over a week after the Eastern Conference final in December, Wagner told global soccer news and data site Transfermarkt that for the second straight winter, he wanted to return to Europe.

There was no lack of offers, including from English clubs Fulham and Brentford. But none of the offers produced a concrete deal, so Wagner is still here.

The German left back is set to begin his fourth season with the Union. Even at age 25, that makes him one of this team’s veterans — even more so after the departures of Kacper Przybylko to Chicago and Jamiro Monteiro to San Jose.

It so happens that those two players had a significant impact on Wagner’s game. Monteiro played on the left side of midfield, and Przybylko was on the receiving end of Wagner’s service from the wing.

» READ MORE: The Union’s trade of Jamiro Monteiro makes room for the team’s rising stars. Now they have to play.

“Kacper leaves probably the biggest hole of them, because he was a striker — guys have to step in now [and] score goals for us,” Wagner said. “But I think it’s also a good chance like for others to step in to prove they’re also good goal scorers — and especially at the [No.] 10 spot for Jack McGlynn and Paxten [Aaronson] to step in, to get more minutes. You can see in training that they are sharp; they’re really good young kids, and I’m just excited to see what they can bring this season.”

Wagner’s belief that Przybylko’s departure leaves the biggest hole might raise a few eyebrows among fans, given the widespread view that Monteiro was the Union’s best player over the last few years. But Wagner’s view includes a close friendship with Leon Flach, who tends to play on the left side of midfield when he’s out there.

“Last year, most of the time Leon was playing in front of me I think we had a really good relationship with each other,” Wagner said. “I think we connected really good with each other, and you could see that there was not a lot of attacks coming through our left side. So I think the chemistry of me and Leon is like really good already.”

While Wagner is inarguably one of Major League Soccer’s best left backs — top of the list for a lot of people, not just around here — he isn’t spared facing competition. Anton Sorenson, a 19-year-old academy player, is a big-time prospect.

“Right now you can’t see that much, but I think he’s a good young kid with a good left foot,” Wagner said of Sorenson. “He just has to probably read the game a little bit better, or get in the offense a little bit faster. But this just comes time by time, and I think he can have a good future if he’s working a lot.”

Other than that, Wagner is focused on the present, and a preseason that he called “one of the sharpest” in his time here.

“I think the playoff run [last year] could help us — everybody saw that we can win against any team,” Wagner said. “It’s still a bit bad taste in our mouths, probably, about how things ended, but I think we can get, this year, even further. We just have to take [it] step-by-step, don’t think too much already. But I think this year we have probably the best team we’ve ever had.”