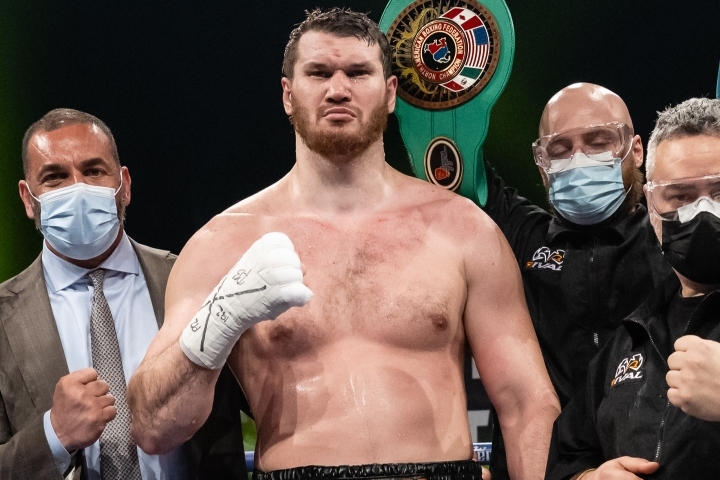 Among Arslanbek Makhmudov’s many talents is his ability to look frightening. When considering why Makhmudov has the level of hype that he has at the moment, this ability is crucial. With angular eyebrows, a scruffy beard that concedes ground to a tire-thick neck and oversized chiseled bodily features, Makhmudov photographs like an action movie villain without the help of CGI or a makeup artist. When you see Makhmudov in the ring, or in press photographs, the image of him screams danger.

He doesn’t always look that way, though. Stuffed inside a goose down vest and tucked behind a blue surgical mask, Makhmudov’s eyes are soft. When his mask comes off, his smile is bright. He’s aware of this dichotomy too, and knows how to play it up. On his Instagram page, he’s joking and goofing around in ways you wouldn’t think a man of his stature and facial construct would—the hulking action star doing a buddy comedy dynamic. He dodges Nerf gun bullets from a friend, throws clumsy roundhouse kicks at Century Bob the standing punching bag, and lets a parade of young children punch him in the stomach as hard as they can, one after another.

“He has a fire inside of him, and you have to keep that in him,” said Makhmudov’s trainer Marc Ramsay.

Part of keeping Makhmudov’s fire lit for Ramsay is finding him opponents that can challenge him, which has proven difficult to this point in his career. Makhmudov has knocked out every opponent he has faced, ten of them in the first round, five of them in less than 40 seconds. In addition to training Makhmudov, Ramsay also has an executive role within Eye Of The Tiger Management and works with promoter Camille Estephan to match his fighters.

In an effort to find an opponent who could give Makhmudov rounds, they matched him with Mariusz Wach this past Saturday in Montreal. Wach, a former world title challenger, is perhaps the most durable heavyweight of this generation when you consider who he has fought and the amount of punishment he took from them without ever being taken off his feet. In addition, he’s one of the physically largest fighters on the planet, in terms of height, reach, weight and general bodily proportions.

At 42 years of age, Wach’s days as a potential title challenger are long past (though he campaigned to step in and face Tyson Fury on an ill-fated December 5 date in 2019), but coming into Saturday, he was a fight removed from going 10 rounds with Hughie Fury without incident and three fights removed from doing the same with Dillian Whyte.

Offers were made to “many” other heavyweight veterans and contenders, according to Estephan, but only Wach would accept. According to Wach, he had more lucrative offers available to him, but found Makhmudov to be unremarkable and felt a fight against him would be both compelling and winnable.

“I want to see him losing a round, keep his composure, be patient in there, box. This is something we do in the gym, but the real exam, like everybody knows, is in competition,” said Ramsay prior to the fight.

Ultimately, Wach was able to give Ramsay what he wanted, and Makhmudov what he needed.

Though the Cabaret du Casino was empty except for necessary personnel due to pandemic restrictions in the province of Quebec, there was tension in the venue even before the bell rang. As Makhmudov stepped over the ropes after walking to the ring only to a recording of emergency sirens, Wach was waiting to meet him face to face before his right foot could even hit the mat, showing that he really did believe what he said prior to the bout to be true.

Aided by a rescheduling of the bout and a friendly competition with his son, as he told Polish journalist Przemek Garczarczyk, he was able to lose 25 pounds in two months, and entered the ring in the best shape he’s been in for several years. It was a version of Wach that was mentally and physically prepared to trouble a lot of heavyweights—and for a little while, one that did just that with Makhmudov.

Makhmudov, 32, found himself experiencing something new as a professional, fighting a bigger man and being forced to fight in a fashion that accounted for that. Wach was able to land jabs on him due to his reach, and when Makhmudov would go to the inside to avoid that scenario altogether, Wach had a sneaky uppercut waiting for him there too. One could have reasonably scored the third round for Wach, and certainly the fourth.

There were times when Wach was landing and laying his giant frame on him that Makhmudov’s face turned from menacing to determined, the difference between the look of someone who is certain of the coming result and one who merely desperately wants it to be so. Just as Ramsay had hoped, it tested the urges that Makhmudov showed in his infamous World Series of Boxing run, when he clubbed and roughhoused his way to a dozen straight victories. Along the way, he got away with more than a few fouls—shots behind the head, tossing opponents, and even the old pro wrestling trick of pushing an opponent’s chin back to land a forearm to the chest.

“(I did) crazy stuff when I was young,” Makhmudov recently joked online in the caption beneath video of a particularly wild sequence of fouls from his WSB days.

At the end of the fourth round, Ramsay got the teaching moment he’d been trying to orchestrate. It’s a dynamic particular to boxing, in which a coach specifically wants their athlete to lose portions of the contest in actual live action so as to improve. Coaches in other sports may talk about the value of adversity and learning from mistakes after the fact, but no football coach would ever say that they want to give up touchdowns on Sunday so that they can work on their two-minute drill. But boxing can’t be fully replicated in practice the way other sports can, nor should it. There is no perfect facsimile for a real fight, which is what Makhmudov found himself in for a period of time.

“The thing is, you want him to do things properly, with the proper technique, not all over the place. I want him to be aggressive, but aggressive in a technical structure. And discipline in the ring. Other than that, I give him all the freedom in the ring,” said Ramsay. “The worst thing you can have in professional boxing is you go in for a world title fight, the night of the fight, and you’re surprised by something, you see something you’ve never seen before. It’s also for the mentality of the fighter. Let’s say we’re losing a round in a world title fight against Tyson Fury and you lose a round, okay, don’t worry, it’s one round.”

Between the fourth and fifth, Ramsay calmed Makhmudov in the corner, telling him to “just box” and instructed him to step back after his combinations rather than stepping in. Russ Anber, playing a vital role in aiding Ramsay in the corner, slapped Makhmudov in the chest and shouted “come on brother,” to help ensure that the aforementioned fire was indeed still there, even if it had to be a little less of a blaze for a moment.

Makhmudov followed orders, and at the end of the fifth round had wobbled Wach with clubbing blows. As Wach sat on his stool, his eyebrows raised ever so slightly, as if to say “that felt different.” Prior to this fight, no man had ever put Wach on the canvas, but in the sixth, it happened. Makhmudov cornered Wach, and while the over-the-top sledgehammer shots he was throwing no doubt caught the viewer’s eye, it was a perfect sweeping right hand that was the one that truly discombobulated the iron-chinned veteran. Before long, Wach had nowhere to go but down, not that his body gave him any choice in the matter and referee Steve St. Germain waved it off.

After the fight, Wach smiled and hugged Makhmudov and the two shared a bit of laughter in the ring minutes after one of them left the other slumped across the middle rope. As Makhmudov left the ring, he was forced to put his protective mask back on due to health and safety protocols. But even with his face hidden and with his cheeks teasing a smile above the blue fabric, after watching what he just did it was impossible to look at him and not be frightened.

Corey Erdman is a boxing writer and commentator based in Toronto, Ontario, Canada. Follow him on Twitter @corey_erdman