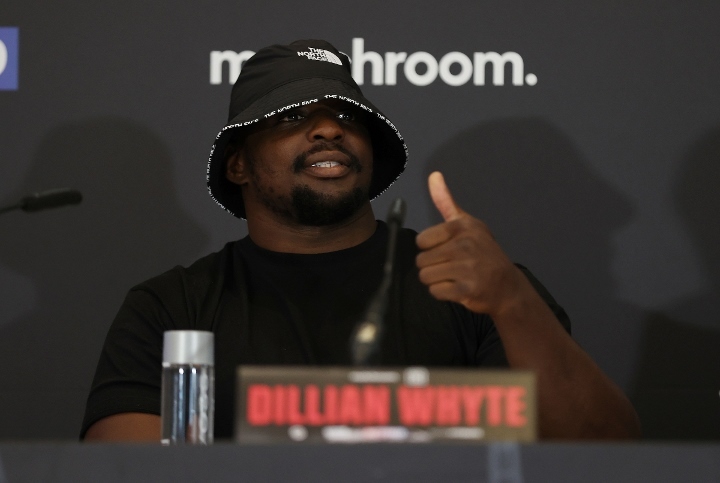 Dillian Whyte waited until the 11th hour, but the British heavyweight contender did the only sensible thing he conceivably could’ve done Monday.

BoxingScene.com has confirmed that Whyte signed his contract Monday to challenge Tyson Fury for Fury’s WBC heavyweight championship April 23 at Wembley Stadium in London. Fury signed his contract before Monday’s deadline, which the WBC established February 1 for both boxers to put pen to paper after Frank Warren’s Queensberry Promotions won a purse bid January 28 with a record offer of $41,025,000.

Whyte’s team negotiated adjustments to his contract over the past couple weeks. All along, though, Bob Arum, Fury’s other co-promoter, and Warren expected that Whyte would sign his contract prior to Monday’s deadline.

An additional $4,102,500 will be left in escrow for whoever wins their fight.

Whyte will earn by far his biggest payday for facing Fury in what figures to be an enormous event in the United Kingdom. Fury-Whyte will headline pay-per-view events in the UK and Ireland (BT Sport Box Office) and in the United States (ESPN+).

The undefeated Fury (31-0-1, 22 KOs), who has become one of boxing’s biggest stars since the 33-year-old Manchester native last fought in the United Kingdom 3½ years ago, emphatically knocked out American rival Deontay Wilder (42-2-1, 41 KOs) in the 11th round of his last fight, which took place October 9 at T-Mobile Arena in Las Vegas. DraftKings sportsbook lists Fury as a 6-1 favorite over Whyte, a Jamaican-born boxer who has long called London his home base.

Whyte (28-2, 19 KOs) avenged a stunning, fifth-round knockout loss to Alexander Povetkin in his most recent appearance.

His fourth-round stoppage of Russia’s Povetkin (36-3-1, 25 KOs) in their immediate rematch occurred last March 27 at Europa Point Sports Complex in Gibraltar. Whyte will end almost a 13-month layoff by the time he enters the ring to face Fury.

The former IBF/IBO/WBA/WBO champion beat Whyte by seventh-round technical knockout in December 2015 at O2 Arena in London. In his following fight, Joshua became a world champion by knocking out American Charles Martin (28-3-1, 25 KOs) in the second round to win the IBF belt at O2 Arena.

Keith Idec is a senior writer/columnist for BoxingScene.com. He can be reached on Twitter @Idecboxing.