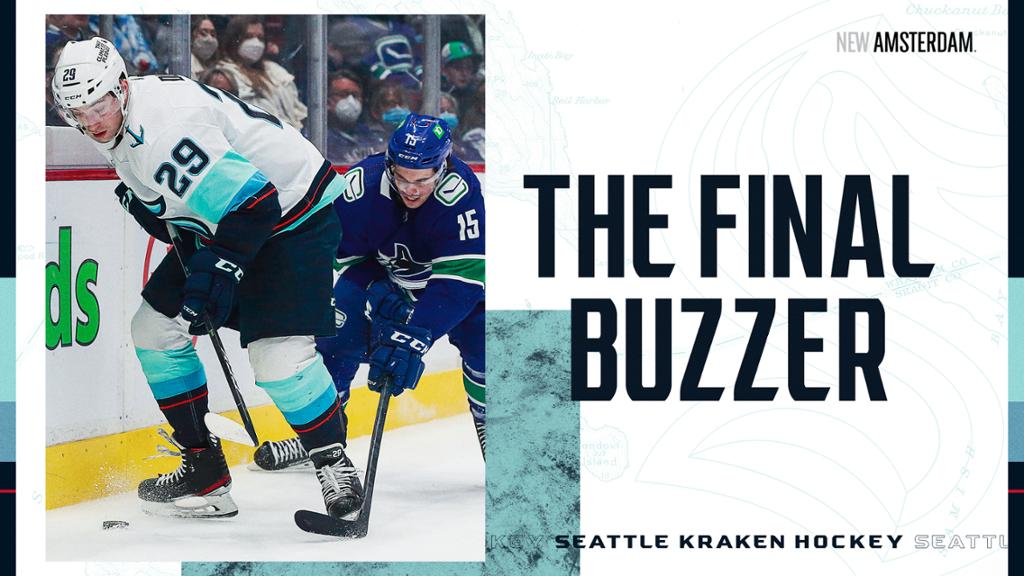 The Kraken bounced back once in Vancouver Monday, responding to an early Canucks score, just 11 seconds into the game, with goals by Jared McCann and Mark Giordano before the first period ended.

But Seattle couldn’t come back a second time after Vancouver scored three straight goals, two in the middle period and the dagger 35 seconds into the final period to make it 4-2.

“In the second period, they won the races, they won the puck battles,” Kraken head coach Dave Hakstol said. “Because of that, they won the majority of the zone time. We were expending most of our energy [preventing goals] in the defensive zone.”

Kraken goalie Chris Driedger, who stopped 41 shots, said he “didn’t like the fourth [goal] to be honest, I was a little too deep thinking there might be a back-door play … another step forward and it would have been a save.”

The score was on the remaining minute of power play held over from the second period.

“On that fourth goal, we need the [penalty] kill there,” Hakstol said.

McCann almost made it 4-3 in the last two minutes but instead hit the post on a rocket of a shot on the power play.

Seconds later, Vancouver scored an empty-net goal to make it a 5-2 final. That makes it three straight wins for Vancouver in the season series.

Video: SEA@VAN: McCann scores on 2-on-1 rush to tie it

Not an Ideal Start

This Pacific Northwest rivalry game didn’t start with promise for the Kraken.

The Canucks capacity crowd roared with approval, celebrating the score and the very recent British Columbia ordinance allowing a full house as part of loosening COVID-19 protocols. The defensive turnover started with Driedger trying to rim out a puck behind his net, but the puck took a bad bounce and was subsequently intercepted and quickly moved to Motte’s stick. The shot skidded past Driedger’s right toe.

Just three minutes after the mishap mere seconds into the game, Kraken veteran Marcus Johansson continued showing his playmaking chops, taking a puck Vancouver defenseman Tyler Myers could not control deep into the Canucks zone. Myers pursued Johansson, who parried with patience by holding the puck until Myers laid out on the ice to block a pass that didn’t come until Johansson skated by the defenseman.

After Canucks goalie Thatcher Demko committed to what he thought was a Johansson forthcoming shot, the winger instead zinged a pass to linemate McCann to finish the scoring play. It was McCann’s 21st goal of the season, notched in his 400th career NHL game.

McCann was drafted by the Canucks in the first round of the 2013 NHL Draft. After Monday’s morning skate, the Vancouver media asked the Kraken’s leading scorer about his early days as an NHLer.

“I definitely gained confidence and matured here,” said McCann, who played 69 games in a Vancouver uniform before being traded after his rookie season. “The Sedin brothers, Alex Burroughs, they taught me how to be a pro every day. You know, the day you are comfortable is the day you get traded or somebody gets your spot. Every day in the NHL is a gift.”

Giordano Gets His Due

The second Kraken goal was the franchise’s third shorthanded score (the first two were scored in the same game against Buffalo early in the season).

The scoring play started with Riley Sheahan winning the faceoff in the defensive zone and Joonas Donskoi moving the puck out of the zone, suddenly stopping to lift a two-zone lob pass that captain Giordano chased and corralled at full speed.

Giordano signaled a backhand move, but as soon as Demko followed left, Giordano moved the puck to the forehand and beat the right-handed Demko past the goaltender’s stickhand blocker glove.

Gio was overdue. It’s his first goal since Dec. 30 (against his team of 15 seasons, the Calgary Flames). Giordano, who has clanged two posts in the last three games, broke a 19-game scoreless streak with his fifth goal of the year.

“It looked like a huge lane to me,” Giordano said during the second intermission. “When I get those opportunities, I have to take them.”

Video: SEA@VAN: Giordano catches up to pass, scores on break

After the opening goal, Driedger tightened up, looking in position and poised, managing to get his body and equipment in front of 14 straight saves to end the first period.

The second period featured more key saves from Driedger, who faced 30 shots by the 33rd minute of the game. One of the best stops was a close-in save on Canucks veteran J.T. Miller less than two minutes into the middle period. Not only did Driedger make the stop, he gathered in the rebound for a whistle and denied a second scoring chance.

Two minutes later, Vancouver’s Travis Hamonic tied this PNW affair at two goals apiece. He scored on a near-side shot that beat Driedger between the legs (a goal the Kraken keeper said post-game he would like back, along with the first goal).

Driedger appeared to be indicating a video challenge for goaltender interference might be in order since Vancouver forward Matthew Highmore was pestering Driedger net-front. Kraken TV analyst JT Brown surmised the replay would show Kraken defenseman Jeremy Lauzon shoved Highmore into the crease.

Vancouver’s third goal, late second period, resulted from Vancouver young star Elias Pettersson sending the puck toward the net from a bad angle to the right of Driedger, who blocked the shot but couldn’t control the rebound. Rookie Vasily Podkolzin was there for a rebound score, his eighth of the year and second against Seattle. Kraken defender Adam Larsson, on the scene at the crease, couldn’t find a way to clear the puck or lift Podkolzin’s stick.

Vancouver finished the night with 46 shots on goal. Driedger made 41 saves (14 in the first period, 16 in the second and 11 in the third) while Demko notched his third victory over the Kraken.