Football leads sports at center, golf and horseshoes carry on 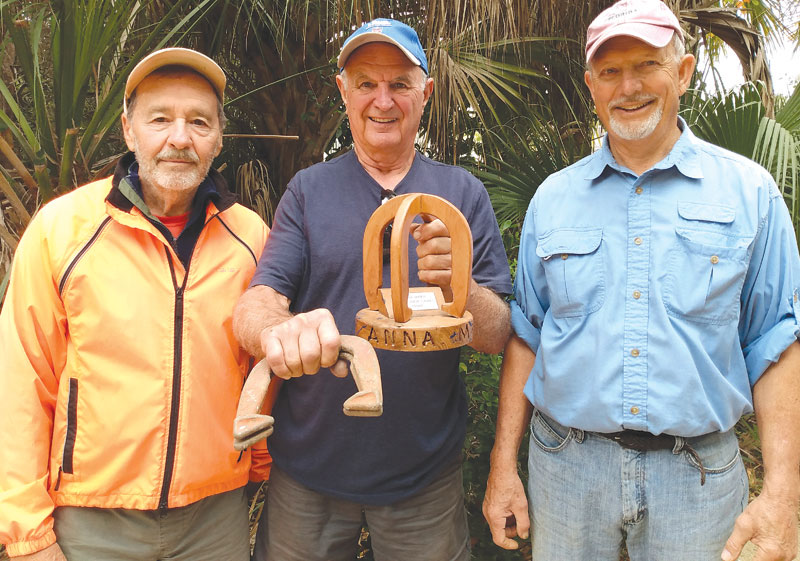 Tim Sofran, center, holds the trophies for sweeping the competition at the Anna Maria horseshoe pits in the past week. He teamed up Feb. 16 with former Anna Maria Commissioner Tom Skoloda, left, for the win and then won it all Feb. 19 with Del Reese. Islander Photo: AMI Pitchers 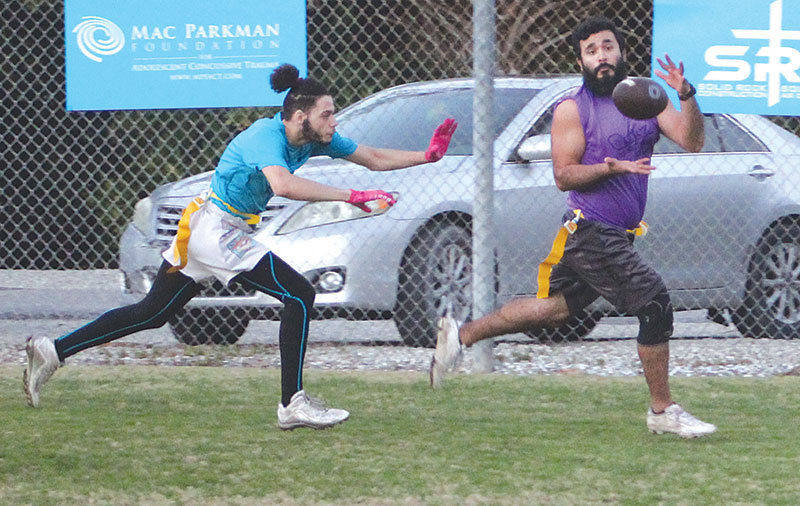 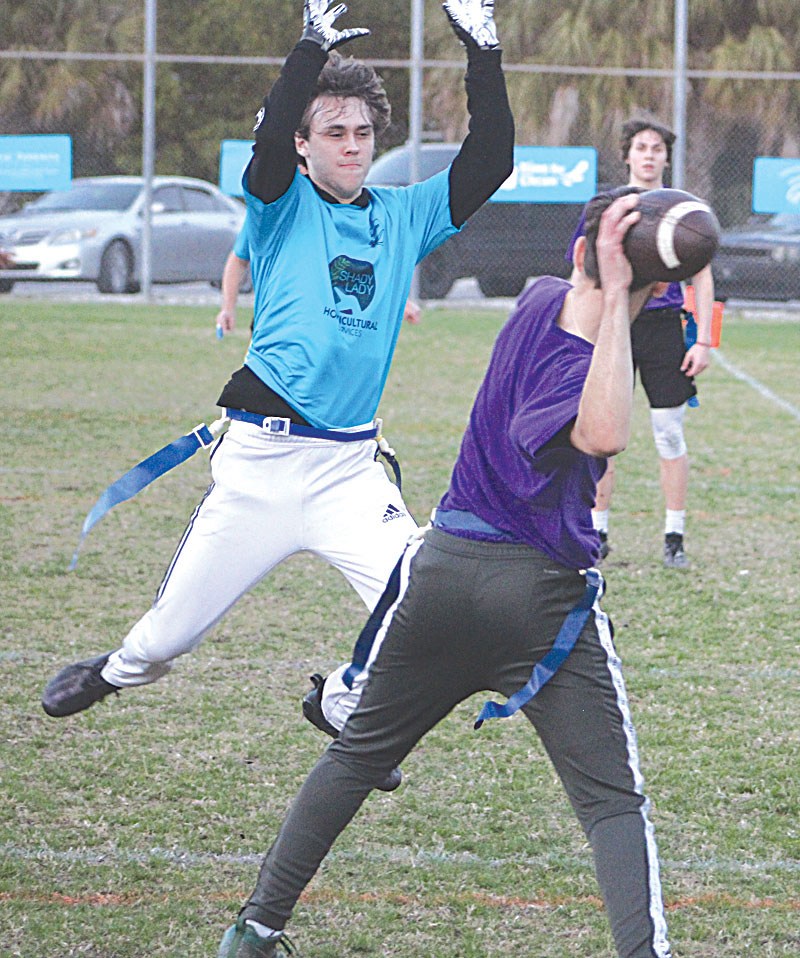 TBT has surged to the top of the standings in the adult flag football league. A 5-1 record puts them a game ahead of Prosper Bradenton, Solid Rock Construction and Moss Builders — all 4-2. We The Best Lenders holds down fifth place at 3-3, followed by Shady Lady and Cortez Deep Sea Fishing at 2-4. Sandbar Restaurant completes the standings at 1-5.

Action Feb. 17 got started with a barn burner between Cortez Deep Sea Fishing and Shady Lady.

Connor Haughey led Shady Lady with four touchdown passes and two rushing touchdowns. Tim Holly had six catches, including two for touchdowns, while Jay Waller and Jasmine Muldoon both finished with TDs and an extra point in the loss.

TBT cruised to a 30-13 victory over Solid Rock Construction in the second game of the evening behind five touchdown passes from Matt Briley. Yandy Rocamora led all receivers with seven catches, including three for TDs, while Jeremy Rodriguez finished with two TD grabs.

Moss Builders outscored Sandbar Restaurant 45-24 thanks in part to a Ryan Moss-to-JB Shuck connection that produced three TDs. Moss, who finished with five TD passes, also connected with Jesse Griffin and Lindsey Styka, while Michale Bolognone ran in a TD.

The final game of the evening was a tight affair that saw We The Best Lenders slip past Prosper Bradenton by a 20-18 score.

Dominick Otteni threw three touchdown passes, including two to Brandon Kull, who also received a TD catch and a 2-point conversion from Tyler Brewer in the victory.

Jonathan Moss connected with Greg Moss for three TDs in the loss.

Youth football action at the center resumed Feb. 14 after a rainout in the previous week’s action.

Moss Builders is on top of the 8-10 division with a perfect 5-0 record and Solid Rock Construction is on their heels at 4-1. Beach Bums and Prosper Bradenton share third place at 3-2, followed by Shady Lady and Bradenton Beach Parasailing at 2-3. Progressive Cabinetry at 1-4 and Mac Parkman Foundation at 0-5 complete the standings.

Blalock Walters with a 4-0 record sits comfortably atop the 11-13 division standings. BW’s closest pursuers are Moss Builders at 3-2, while Nissan of Bradenton, HSH Designs and Investigative Lawyers Group follow at 2-2. Miz & Hiz Biz are 1-3 followed by Wash Family Construction at 0-4.

Action in the 8-10 division kicked off with Prosper Bradenton cruising to a 24-2 victory over Shady Lady behind a passing TD and a pair of TD runs from Grady Sandhoff. Landon Sinphay chipped in with a touchdown run, while Cayson Travis completed the scoring in the victory with a TD reception.

Shady Lady was led by Luca Vieman, who intercepted an extra point attempt and returned it for a safety.

The second 8-10 division match up saw Bradenton Beach Parasailing earn a 20-0 shutout win over the Mac Parkman Foundation team. Connor Fountain threw two touchdown passes and added a touchdown reception on a pass from Kellen Hunt to lead the Parasailing, which also received touchdown grabs from Tess Bolognone and Jackson Kennedy in the victory.

The third 8-10 division game of the night saw Solid Rock Construction double up on Progressive Cabinetry 23-12. Van Havell hooked up with Colson Mendiola on a pair of touchdown passes, while Nixon Conner ran for a touchdown.

Oliver Morrison-Tirpak and Gunnar Maize each ran for a touchdown for Progressive in the loss.

Action in the 11-13 division got started with first-place Blalock Walters outlasting HSH Designs 27-19. Ashton Hovda threw four touchdown passes, including one each to Peyton Hovda, Mattox Caseman, Liam Proud and Cale Rudacille for the win.

Jack Mattock threw a pair of touchdown passes to Emma Raulerson and ran for another score to carry HSH Designs.

Nissan of Bradenton held on for a 20-16 victory over Investigative Lawyers Group behind TD passes from Charlie Rogers and Rowan Benford. Brennan Gunter had a pair of TD grabs, while Colten Shook and Rogers each added TD catches for the victory.

Landon Sallier accounted for the Lawyers’ score with a pair of TD runs and a two-point conversion.

Jack McCarthy connected with Baily Cain for a TD, while Frankie Coleman ran for a score and added a 2-point conversion for Miz & Hiz Biz.

The week that was at Key Royale Club got started Feb. 14 with the men playing their weekly modified-Stableford system match. The team of Hoyt Miller, Chuck Patrick, Dave Richardson and Rich Salzburg combined on a plus-7 to earn clubhouse bragging rights for the day.

Harvey Shovers earned individual honors with a score of plus-5, a point ahead of Debi Wohlers and two points clear of Marty Hicks, Richardson and Salzburg.

The women played a nine-hole individual-low-net match in two flights Feb. 15. Jenny Huibers fired a 1-under-par 31 for the low-net round of the day and first place in Flight A. Nina McSparren was a shot back in second, while Roxanne Koche and Monica Lawson tied for third at 1-over-par 33.

An even-par 32 by Jane Perkins gave her first place in Flight B by two strokes over second-place finisher Judy Menchek. Pam Alvord and Laney Davis shared third place at 3-over-par 35.

On Feb. 17, the members played a nine-hole shamble, where all members of the foursome finish out the hole from the best tee shot of the group. The team of Ron Buck, Tim Donnar, Tony Donnelly and Jeff Jump matched the 5-under-par 27 carded by Bob Barrett, Jim Holtgreve, Terry Schaffer and Greg Shorten for a first place tie. Second place went to the team of Mike Cusato, Eric and Monica Lawson and Dave Rinckey with a 4-under-par 28.

Horseshoe action at the Anna Maria City Hall horseshoe pits Feb. 16 saw three teams advance to the knockout round with 3-0 records during pool play. The bye to the finals went to Tim Sofran and Tom Skoloda who watched as Bob Baker and Bob Brown eliminated Tom Farrington and Jerry Disbrow 23-11. Sofran and Skoloda took advantage of the free pass to the finals with a 23-15 win over Baker and Brown.

Sofran found himself back in the winner’s circle Feb. 19, this time teaming up with Del Reese to forge the lone 3-0 pool-play record to earn the bragging rights for the week.

There is no charge to play and everyone is welcome.

Manatee County Parks and Natural Resources wants to put some spring into March.

To register for the run, go online to runsignup.com/manateefitfest.