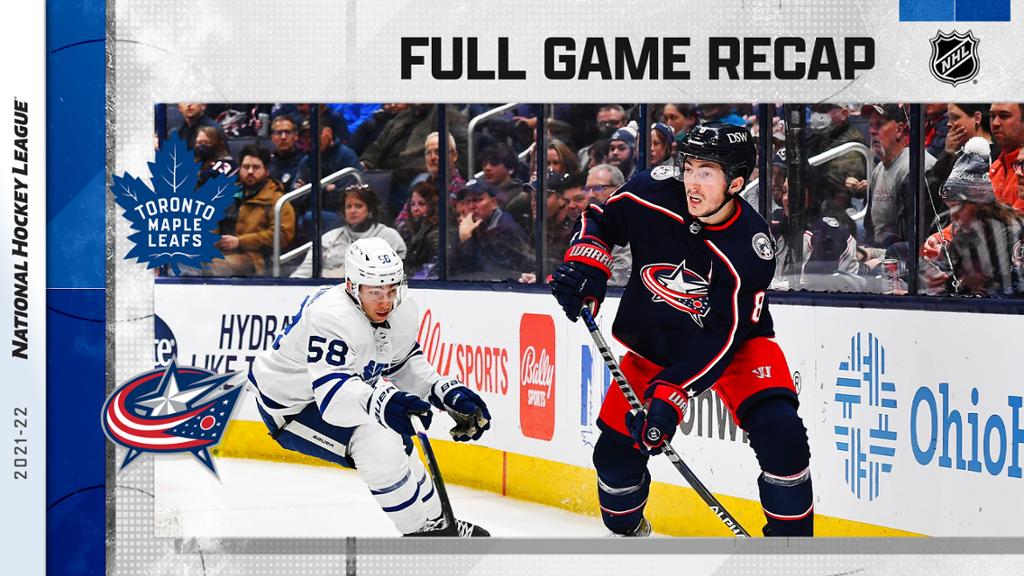 COLUMBUS — Patrik Laine scored his second goal of the game 20 seconds into overtime to give the Columbus Blue Jackets a 4-3 win against the Toronto Maple Leafs at Nationwide Arena on Tuesday.

Laine took a pass from Jakub Voracek and snapped a shot from the right circle.

“I knew [Voracek] wasn’t going to shoot his backhand from the blueline,” Laine said. “He made a great play and gave me some room and I was able to get my shot off.

“We had a chance to score more. Four was enough. I was happy to get two of them and help get the two points that we need.”

Laine extended his point streak to 10 games, and J-F Berube made 39 saves and got his first NHL assist for the Blue Jackets (26-23-1), who have won three straight and six of seven.

Auston Matthews had a goal and two assists, and Jack Campbell made 26 saves for the Maple Leafs (32-14-4), who have lost three straight.

“We’re leaving the rink a little bit sour, but I thought we did a lot of good things tonight,” Matthews said.

Jason Spezza tied it 3-3 at 17:54 of the third period while the Maple Leafs had an extra attacker. He tried to kick the puck to his stick, but it went across the goal line. Video review determined there was no distinct kicking motion.

Michael Bunting gave Toronto a 1-0 lead at 12:50 of the first period with his 17th goal. He is tied with Tanner Jeannot of the Nashville Predators for the most by a rookie this season.

Mitchell Marner skated with the puck through the slot after a turnover and was tripped by Blue Jackets defenseman Vladislav Gavrikov. Marner was falling when he passed back to the left post for Bunting to tap in.

“He’s got some confidence with the puck,” Blue Jackets coach Brad Larsen said. “He wants to shoot the puck because he believes it is going to go in.”

Zach Werenski sent a pass to Boone Jenner, who dropped the puck to Laine. He skated to the middle of the left circle before scoring to the top right corner with a 25-foot snap shot.

Matthews made it 2-1 at 15:23 from a backhand set-up from the right circle by David Kampf. Matthews went to the backhand to put the puck past a sliding Berube for his 34th goal, one behind Leon Draisaitl of the Edmonton Oilers for the NHL lead.

Toronto had an 17-5 shot advantage in the second period.

“Except for the Laine goal, it’s as perfect a period as you probably can be in terms of our structure,” Maple Leafs coach Sheldon Keefe said.

Adam Boqvist tied it 2-2 at 1:05 of the third period with a power-play goal, going 1-on-3 into the zone and scoring from the high slot after Berube left the puck behind the net for him.

“Not acceptable on my part,” Campbell said. “We should have won 3-0, or whatever. … We deserved two points.”

Brendan Gaunce put the Blue Jackets ahead 3-2 at 7:13, his second goal in as many games. He outraced defenseman Ilya Lyubushkin in open ice for his third goal of the season.

Berube, playing a second straight game for the injured Elvis Merzlikins and Joonas Korpisalo, won his first NHL game since April 4, 2018, 7-3 against the Buffalo Sabres on Sunday.

NOTES: Laine’s streak is the second-longest of his NHL career after a 15-game run for the Winnipeg Jets in 2017-18. … Laine is tied for the third-longest point streak in Blue Jackets history behind Ryan Johansen (13 games, 2014-15) and Cam Atkinson (12, 2018-19). … Jenner has scored seven points (two goals, five assists) in a four-game point streak. … Werenski had two assists to give him 222 points, one behind Seth Jones for the most by a defenseman in Blue Jackets history. Werenski has scored eight points (two goals, six assists) in a six-game point streak. … Lyubushkin had one hit playing 15:28 in his Maple Leafs debut after being acquired in a trade with the Arizona Coyotes on Saturday. … Keefe said pregame that Jake Muzzin is in concussion protocol. The defenseman left with three seconds remaining in the second period Monday after a collision with Montreal Canadiens defenseman Chris Wideman. Muzzin remained in Montreal overnight for observation before returning home Tuesday. He missed seven games with a concussion sustained Jan. 15.