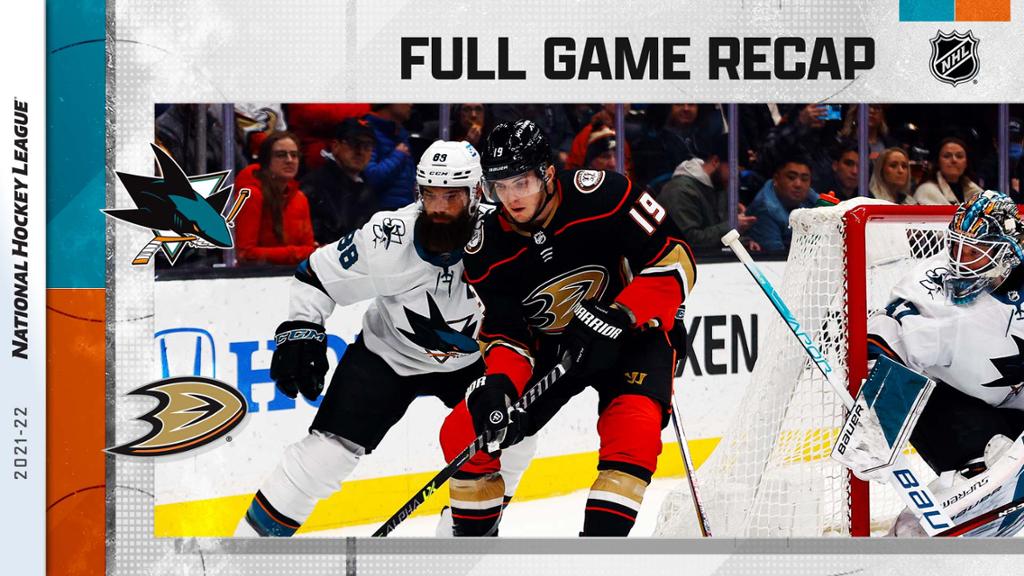 ANAHEIM — Rickard Rakell scored twice and had the deciding goal in the shootout for the Anaheim Ducks in a 4-3 win against the San Jose Sharks at Honda Center on Tuesday.

Anthony Stolarz made 40 saves, including seven in overtime for the Ducks (25-19-9), who have won two straight against Western Conference opponents after going 0-8-2 in their previous 10 games against Western teams.

“That last game of the road trip [a 7-4 win against the Vancouver Canucks on Saturday], we wanted to build off that,” Stolarz said. “I thought we came out and had a good start.”

“It’s natural when you get to this point, if you’re on the outside looking in, you start to think about the [NHL Trade] Deadline (on March 21),” Couture said. “[Sharks coach Bob] Boughner told us to let it go and just play.”

Video: SJS@ANA: Rakell scores off draw for 2nd of game

Stolarz, making his first start since Jan. 27, made three saves in overtime during a power play and then turned away Couture’s attempt in the first round of the shootout.

Rakell won it in the third round, slowing up to the side of Reimer and backhanding the puck high in the net.

“I don’t think I’ve done that [shootout move] before,” Rakell said. “I’ve done it a lot in practice. It wasn’t really what I had in mind.”

Derek Grant gave the Ducks a 1-0 lead at 3:38 of the first period when he finished off a 2-on-0 rush with Sam Carrick.

Couture tied it 1-1 at 7:10. He won a face-off in the Anaheim zone and the puck went to Burns at the top of the left circle. Burns’ shot was blocked by Ducks forward Ryan Getzlaf, but Stolarz lost sight of the puck and Couture was in position to push it into the net.

Zegras took a shot off a face-off win by Adam Henrique. Reimer made the save, but the rebound went off Rakell and into the net.

Couture put San Jose ahead 3-2 on a power play at 13:44 with his fourth goal in five games.

Stolarz made another difficult save on Noah Gregor at 10:41 just as a penalty ended for the Sharks, but Ducks defenseman Hampus Lindholm was called for a double minor for high-sticking, and Couture scored during the second penalty off a rebound left in the crease.

Rakell tied it 3-3 at 16:09 off another face-off win by Henrique in the San Jose zone. It was his sixth goal in the past seven games.

“After he got that first one, [Rakell] kept shooting the puck,” Ducks coach Dallas Eakins said. “He was really on his game, really engaged and very, very focused.”

NOTES: Forward Ryan Dzingel had two shots in 16:47 and drew a holding penalty in overtime in his Sharks debut. He was claimed off waivers from the Toronto Maple Leafs on Monday, two days after he was acquired in a trade from the Arizona Coyotes. … Rakell has scored 152 goals, one behind Steve Rucchin for fifth in Ducks history. … San Jose defenseman Radim Simek returned to the lineup after being a healthy scratch the past two games. He was minus-1 in 11:46 and committed a boarding penalty with 6:51 left in the third period. … Getzlaf returned after missing two games with a lower-body injury and had two blocked shots and a hit in 14:29.