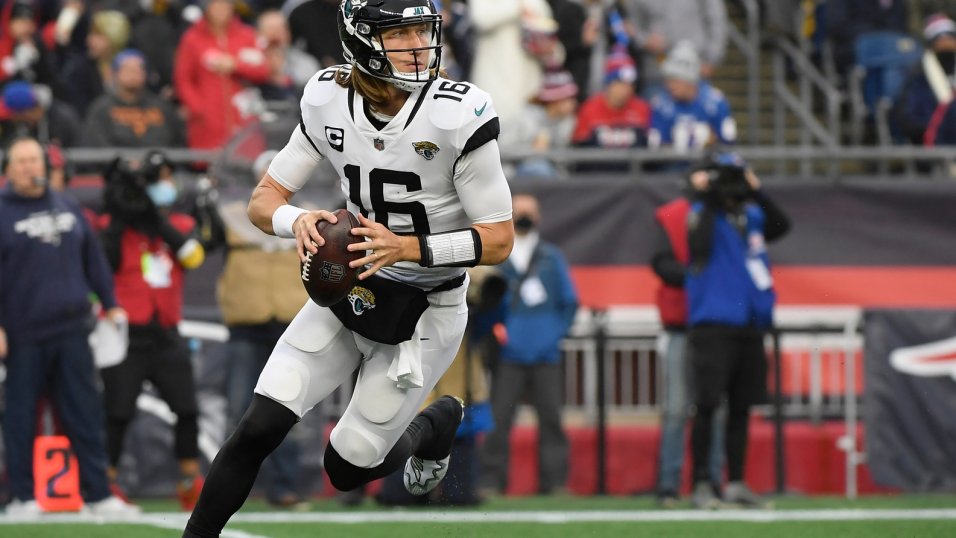 The 2021 NFL Draft class looks poised to go down as an all-timer, and that’s based solely on those who hit the ground running as rookies, namely Ja’Marr Chase and Micah Parsons, among others. There’s still a good number of players who had ho-hum rookie seasons but look poised to be impact players in 2022.

Here are the players most likely to make the vaunted second-year leap.

File this one under “no duh.” Look no further than an 85.1 passing grade in an upset win over the Indianapolis Colts and their top-10 defense in Week 18 to see what Lawrence is capable of. Outside of that, there really wasn’t too much in the way of positive takeaways from his rookie season. Between one of the ugliest coaching situations in recent memory and a banged-up supporting cast, Lawrence wasn’t put in near the situation to succeed that he should be in this upcoming season.

If we are talking about situations built for a quarterback to succeed, there isn’t a better one than what Lance will be walking into next fall. He’ll have George Kittle, Brandon Aiyuk and Deebo Samuel to throw to, one of the league’s best offensive lines in front of him and Kyle Shanahan calling plays. If a quarterback can’t hack it there, he can’t hack it anywhere. In two starts last season, Lance earned middling passing grades of 65.9 and 64.9. Considering he played only one game the year prior and won’t turn 22 until May, he looks poised to make considerable strides next season.

This one may be cheating a little, considering Williams went for 903 yards already as a rookie. But that pales in comparison to what he could do in 2022. With Melvin Gordon III hitting free agency, the timeshare in Denver will be no more, and the 21-year-old back can shine unhindered. Even with the 15th-most carries in the NFL last year, Williams finished with the second-most broken tackles (63).

Before he went down for the season, Moore was starting to round into the Jets’ unquestioned No. 1 receiver. In his final six games, Moore averaged 5.7 receptions and 76.5 yards per game. That’s 96 catches and 1,300 yards if extrapolated out to a full 17-game season. He did it all while playing over 70% of his snaps split wide despite playing almost exclusively from the slot at Ole Miss. With a Zach Wilson emergence and a clean bill of health, Moore should be a 1,000-yard receiver.

Darrisaw’s NFL career did not start off the way the Vikings had hoped — surgical recovery complications caused him to miss the first four weeks of the season. While he took his lumps, Darrisaw was a decidedly different player toward the end of the campaign. His five highest-graded games (out of 11) came in his final six games of the season. That’s a pretty clear and encouraging sign of growth heading into 2022.

After a slow start — only eight pressures the first eight weeks of the season — Paye finished with 31 pressures over the final 10 weeks. He still ran a bit hot and cold, often beating up on poor tackles, but those are the signs of growth you want to see from a rookie. Paye was always seen as a project, so for him to be making strides so quickly with his elite physical tools is encouraging.

Barmore is another player who could technically be considered to already have broken out. Still, he often got lost in the shuffle of the rookie class and was a sub-package player. His 48 total pressures quietly tied DeForest Buckner for the second-most we’ve ever charted from a rookie defensive tackle. Here’s a full list of defensive tackles to notch 40 or more pressures in their first NFL season:

That’s about as predictive a list as you’ll ever see, one that bodes well for Barmore’s future.

Owusu-Koramoah looks primed to take the leap from nice rookie to full-blown difference-maker in 2022. He already was that guy at times for the Browns last year before he was hampered by injury. He had games of greatness, like when he notched three pass breakups against the Chicago Bears and when he managed nine stops against the Baltimore Ravens. While Parsons grabbed headlines at the position, JOK was a versatile and steady piece for the Browns’ defense. If he can simply improve upon his 17.4% missed tackle rate, he’ll be a top-10 linebacker in the league.

Horn looked like he was ready to break out three games into the 2021 season before going down with a season-ending foot injury. Across 95 coverage snaps, he allowed all of one catch for eight yards while grabbing an interception. The makings of a shutdown press-man corner are all there with Horn, he just needs to see the field.

Cisco was an afterthought when Urban Meyer was the Jaguars’ head coach, but the Syracuse product looked like one of the team’s best defenders when he took over as a starter in Week 16. He allowed only one catch for 12 yards while adding a pass breakup over the final three games of the season. The range Cisco was known for with the Orange stood out amongst the Jaguars safeties. Expect considerably more ball production in Year 2.