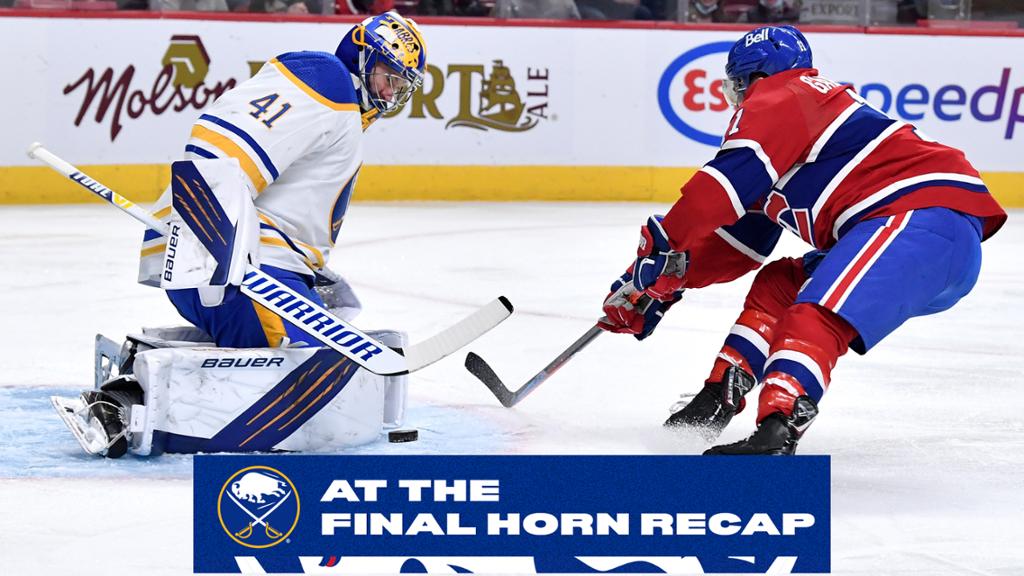 Craig Anderson made 25 saves Wednesday night in the Buffalo Sabres’ 4-0 loss to the Montreal Canadiens at Bell Centre.

Nick Suzuki had a three-point night (2+1) for Montreal, while Cole Caufield and Jake Evans also tallied.

Buffalo’s power play went 0-for-2 and the club successfully killed off Montreal’s only opportunity with the man advantage.

After picking off an outlet pass, the Canadiens opened the scoring when Suzuki beat Anderson with a wrist shot 6:52 into the game.

Buffalo was credited with 21 giveaways in the first period.

Suzuki was hooked by Dylan Cozens on a breakaway attempt 5:57 into the second period and was awarded a penalty shot. He fired it glove side for his second goal of the game.

Caufield scored off a faceoff 1:18 into the third period to make it 3-0. He’s on a four-game point streak.

With the goaltender pulled, Evans scored on the empty net with 1:33 left.

Anderson made a big save on Caufield early on:

Worthy of a mention

Tweet from @BuffaloSabres: The best tradition in hockey🙌Congratulations to @bbiro22 on his @NHL debut! pic.twitter.com/g3aMPzz2RY

Defenseman Henri Jokiharju did not play in the third period due to a lower-body injury. His last shift came with 10:38 remaining in the second period.

Buffalo’s road trip continues Friday night against St. Louis. The Sabres and Blues will face off at 8 p.m. on MSG and WGR 550. Pregame coverage on MSG starts at 7:30.