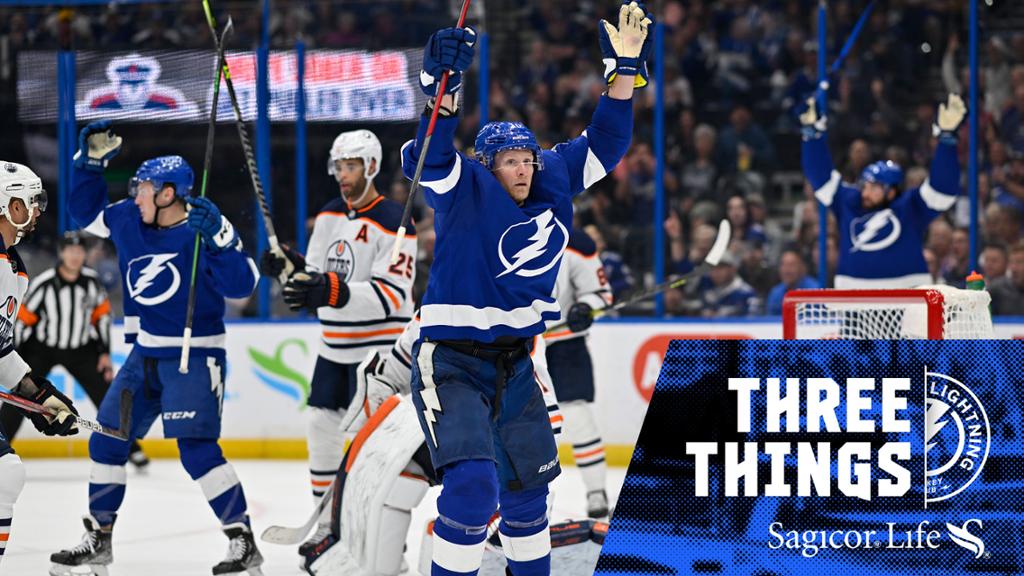 Tampa Bay’s home contest Wednesday against the Edmonton Oilers was a tricky proposition for the Lightning.

The Bolts were playing their first game in eight days, the last time they took the ice coming February 15 in a 6-3 victory over the Devils in New Jersey. Also, Tampa Bay is competing in the organization’s first outdoor game Saturday when it takes part in the NHL Stadium Series versus the Predators at Nashville’s Nissan Stadium. There might have been a tendency to overlook the Oilers and ahead to that historic event.

The Lightning showed a singular focus in their first home game in 22 days, though, and handled their business against Edmonton, ensuring they’d roll into Nashville feeling good about themselves and their game.

Tampa Bay never trailed on Wednesday, although the Oilers made the game closer in the end than the Lightning had hoped. The Bolts opened up a 4-1 lead three-quarters of the way through the second period, allowed the Oilers to climb to within a goal by the midpoint of the third but tacked on a late insurance marker to secure a 5-3 win over the Oilers to improve to 33-11-6 (72 pts.) on the season.

Tampa Bay has now won nine in a row at home over Edmonton, the Lightning’s longest active home win streak against one franchise and tied for the second longest in franchise history.

Here’s what stood out from the Bolts’ 32nd victory of the season in game No. 50.

1. A FITTING MILESTONE
Corey Perry scored his 400th career NHL goal late in the second period, a goal that would eventually prove to be the game-winner.

And he did it in the most Corey Perry way possible: by going to the net and worming his way to put a puck past the opposing goalie.

Perry registered the milestone at 15:24 of the second when he was able to get his stick on Mikhail Sergachev‘s shot from the left circle to tip the puck into the net. Perry immediately threw his hands up in the air and skated to the corner, where he waited for his teammates to come join the celebration with him.

“The way it happened, the way it went in, being a foot outside the crease or whatever it is, it’s pretty fitting,” Perry admitted.

“He is a slick, sneaky, skilled player in the blue paint,” Lightning head coach Jon Cooper added. “He’s just oozing with hockey sense all around the net there.”

Perry becomes the ninth active NHL player to reach the 400-goal milestone and is the 103rd player all-time in the NHL to achieve the feat.

“It’s exciting,” Perry said. “It’s a great accomplishment. I have to give a lot of credit to the guys I’ve played with in the past, guys here. It’s exciting. Never thought growing up that I’d hit 400 goals in the NHL. I’m pretty excited and happy right now.”

Perry was kept from finding the back of the net for his first 17 games this season with the Lightning, but once he ended that drought, the goals have been coming with regularity for the veteran. His goal Wednesday was his 14th as a member of the Lightning, the fifth most on the team this season.

“I’m proud of Corey,” Pat Maroon said. “Just being with him as a rookie and him taking me in and making me a better player, a better leader, how to mature into the game. I know it took him longer than he expected, and I’m just really super proud of him. 400 goals is freaking amazing. A lot of people can’t say they’ve scored 400 goals in this league. The way he plays the game, how hard he plays, how he gets to the net, he sticks up for his teammates, he plays the hard way and he scored 400 goals the hard way. I’m very proud of him.”

2. A BETTER START
Much was made entering the Edmonton game about Tampa Bay’s sluggish starts previously this season coming off a long layoff.

Most notably, the Lightning were overwhelmed by the Colorado Avalanche in Denver after eight days off, the Avs scoring twice in the first six-and-a-half minutes and sending 24 shots on net in the first period, the most the Bolts have allowed in a period this season.

More recently, Tampa Bay was lethargic to start in New Jersey following three days off, falling behind 2-1 to the lowly Devils after one period and 3-1 in the second before eventually rallying with five unanswered goals to win going away.

Starting on time was a point of emphasis for the Lightning coaching staff coming into Wednesday’s game playing their first game in eight days. They held two long practice sessions Monday and Tuesday in preparation and went through a full morning skate Wednesday to drive home the message.

And although it wasn’t a perfect start for the Lightning in the win over the Oilers, it was much better than previous ones out of long layoffs.

“Probably wasn’t the best start we’ve had,” Corey Perry said. “The shots were 9-4, but we were up 1-0. And then they tied it. But started to find our legs the last little bit of that period. Second period we found our legs even more and started to play the way we wanted to play.”

Tampa Bay went up 1-0 at 11:57 of the first period when Pat Maroon fired a puck on net off a rush that rebounded off the leg of an Edmonton defender and across the goal line. Connor McDavid tied the game with 1:50 left in the first period on a power-play snipe, but the Bolts went back into the lead right before the break on Steven Stamkos‘ team-leading 24th goal of the season with 15 seconds remaining in the period.

With the rust cleared from their system, the Lightning scored twice more in the second period to build a 4-1 lead.

“It’s a rhythm league,” Jon Cooper said. “If you start taking days off, even if you take two days off, you notice it with the team. But to take six days off here, come back and play three in five nights and then take another five or six nights off, you’re just out of sync. I’ll give the guys credit, we played much better tonight than we did, especially in the first period against Colorado and the first period against New Jersey. It’s tough. Guys need reps. Take nothing away from Edmonton, they’ve got a hell of a team over there. They skate. They’re on top of you. They gave us everything. But we’ve got better in us. And I think as we continue to play games, we’ll get back at it.”

3. KUCHEROV’S MOUNTING MULTI-POINT EFFORTS
One of the more fascinating stats for the Lightning this season revolves around Russian right winger Nikita Kucherov, who missed 32 games earlier in the season due to a lower-body injury.

Kucherov skated in his 15th game on Wednesday. He’s tallied points in 10 of them. And of those 10 games with points, he’s recorded multiple points in nine.

Kucherov picked up another multi-point effort against Edmonton after providing the primary assist on Brayden Point‘s goal midway through the second period that pushed Tampa Bay’s advantage to 3-1.

With five seconds remaining in the contest, Kucherov scored on an empty net for his eighth goal of the season and second point of the night.

Kucherov already ranks third on the Lightning for multi-point games, just two behind Victor Hedman and five behind the leader Steven Stamkos despite playing in just 30 percent of Tampa Bay’s 50 games so far this season.

And that assist he tallied in the second period? That was the 340th of his career, pushing him past Brad Richards and into sole possession of fifth place among Tampa Bay’s all-time assist leaders.

Kucherov leads the NHL for points per game averaging 1.47 each time he takes the ice, just ahead of his opponents on the opposite end Wednesday in Connor McDavid (1.46) and Leon Draisaitl (1.43).

It would appear Kucherov is making up for lost time, his long-term injury far behind him and his sights set on putting up as many points as possible while helping the Bolts continue to collect victories.