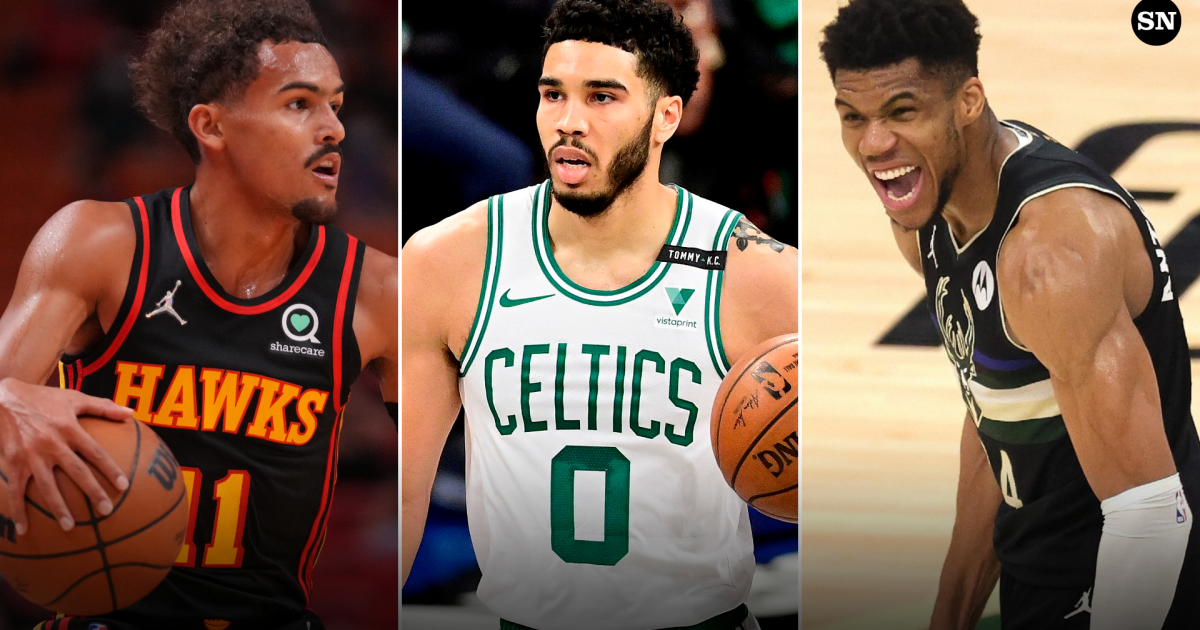 Day 2 of the NBA Playoffs marathon features games between the Hawks and Heat (-6.5), the Nets and Celtics (-4.5), the Bulls and Bucks (-9.5), and the Pelicans and Suns (-10.5). With two of these games around double-digit spreads, there might not be much drama on Sunday, but Nets-Celtics should provide plenty of excitement. Before you place any bets, let’s take a look at Sunday’s NBA odds, key betting trends, and expert picks from BetQL.

BetQL subscribers can see more betting trends and all of our best bets, including player props, with star ratings for every game, so sign up for a BetQL Day Pass!

Odds in this article are subject to change.

Trends:  After a dominant, blowout win over the Hornets and a strong comeback victory over the Cavaliers, the Hawks punched their ticket into the playoffs where they’ll be the No. 8 seed against the top-seeded Heat. Miami won the regular season series 3-1 and the one loss came by just two points, so it’s pretty clear that they’ll be heavy favorites all series long.

Something to consider if you’re thinking about backing the Heat to cover is that the Hawks have gone 0-39 ATS in their 39 outright losses this season. When they’ve lost straight-up, they haven’t covered a single time!

However, Nate McMillan’s teams tend to do well in rematches after losing to that team in their previous matchup. In fact, under McMillan, Atlanta has gone 18-6 SU (+14.3 units, 57.2-percent ROI) avenging a straight-up loss as a favorite, which they were the last time these teams squared off. If you’re on Miami, you’ll be happy to know that they’ve gone 15-3 ATS (+11.3 units, 58.5-percent ROI) against teams that made 36 percent or more of their three-point attempts this season.

Top Player Prop: Trae Young UNDER 9.5 Assists. Young was needed much more as a scorer than a facilitator in the play-in tournament. He took 24 shots in a win over the Hornets and 25 in a win over the Cavaliers to get to this spot. In four regular-season meetings against the Heat, he recorded UNDER this 9.5 assist mark every time, logging eight, seven, nine and five, respectively. Since the Heat are an elite defensive team with on-ball defensive studs like Jimmy Butler and Kyle Lowry in addition to Defensive Player of the Year candidate Bam Adebayo, who can switch onto anyone, Young will face a lot of resistance. Erik Spoelstra will undoubtedly be looking to pressure Young early in the shot clock and make sure the ball is out of his hands as much as possible.

BetQL Staff Pick: UNDER 218.5. Several things jump out about this bet on BetQL’s Hawks-Heat game page. First, the OVER had 92 percent of the tickets, i.e. huge public support, as of Saturday night, which isn’t surprising. However, the UNDER had gotten 98 percent of the money despite having just eight percent of the tickets, meaning sharps are hammering the UNDER. That’s some valuable insight from BetQL, which is also projecting a total of just 215 in this one, making the UNDER 218 one of its best bets Sunday. Considering that the BetQL NBA model went 222-132 (63 percent) on all NBA picks rated two stars (out of five) and higher in the last 14 days entering the playoffs and 43-30 (59 percent) on all O/U picks in that span, I’ll side with BetQL and the sharps and take the UNDER here too. – Brad Pinkerton

Trends: This might go down as the best 2 vs. 7 matchup in NBA Playoff history. It’s been a roller coaster of a season for the Nets, but they at least made it out of the play-in. From injuries to part-time players to trade demands, the preseason favorite to win the NBA title has had a long, bumpy road to get here. Boston finished the year covering in four straight, while the Nets are just 3-7 ATS over their past 10.

Forget trying to factor Ben Simmons (back) into this series, let alone Game 1, with Brooklyn still very vague on when or if he plays this postseason at all. It’s all about Kevin Durant and Kyrie Irving taking over for the most iso-heavy team in the league. BetQL also points out that the Celtics are 25-14 against the first-half spread when playing against a team with a winning record this season, while the Nets are 7-0 ATS against division opponents while on the road this season.

Boston was one of the best teams down the stretch, dominating on defense while still putting up big numbers on the other end, so lean toward Boston to cover here.

Top Player Prop: Jayson Tatum OVER 7.5 Rebounds. With Robert Williams (left knee) out, Tatum is going to have to play big in this matchup, especially with Andre Drummond, Kevin Durant, and other viable frontcourt rebounders crashing the offensive glass. Al Horford will also be asked to play a big role, but we can see Boston trying to play small, even deploying Tatum at the five at times in this particular matchup. Gearing up for the playoffs without Time Lord, Tatum pulled down 10 rebounds in 30 minutes and then nine rebounds in 26 minutes in blowout wins over the Bulls and Grizzlies in his last two tune-up outings. We expect him to do work on the glass in this one, as well.

BetQL Staff Pick: Celtics -4. The Celtics beat the Nets in their past two meetings, and I have all the faith in the world in them to do it again Sunday. Some BetQL trends in favor of the Celtics during the second half of this season are that the team is 21-7 ATS versus teams averaging greater than or equal to 23 assists per game; 16-5 ATS versus teams forcing 13 or fewer turnovers per game; and 13-4 ATS when playing against a team with a winning record. I really like the Celtics to cover against the Nets here. – Lucy Burdge

Trends: The Bulls spent a good portion of the season as one of the surprise teams in the East, but eventually injuries took a toll with Chicago flopping with a 14-16 (13-17 ATS) stretch to end the season. The Bucks come in as the defending champs but also a team ranked just 19th in points allowed per game (112.1). The good news for Milwaukee at least comes on the other end of the court, where the Bucks were the third-best scoring team in the NBA during the regular season (115.5).

According to one of BetQL’s trends for this game, the Bucks are 24-14 ATS against poor pressure defensive teams that force 13 or fewer turnovers per game. The Bulls’ finish to the season doesn’t give a ton of hope for them in this series, and Game 1 could be a big win for the Bucks.

BetQL Staff Pick: Bucks -9.5. I expect this to be a four-game sweep for the Bucks, as the Bulls limped into the playoffs, playing like one of the worst teams in the league since the All-Star break. In that span, per NBA.com, they ranked 25th in both Offensive Rating and Defensive Rating and lost to the Bucks by 21 and 28 points in their two meetings. Not only will Chicago most likely not be able to score with the exceptions of DeMar DeRozan, Zach LaVine, and Nikola Vucevic (they have the second-worst bench production in the NBA), but they also have no answer for Milwaukee’s prolific offense that’s spearheaded by Giannis Antetokounmpo, Khris Middleton, and Jrue Holiday. I fully expect Milwaukee to walk away with a blowout win in Game 1. — Brad Pinkerton

Top Player Prop Bet: Brook Lopez OVER 4.5 Rebounds. In two matchups against the Bulls since returning from an injury, Lopez had six rebounds in 24 minutes and seven rebounds in 29 minutes. Since Chicago owns the 25th-ranked Offensive Rating in the NBA since the All-Star break, expect Lopez to get a lot of rebounding opportunities once again in this matchup. It feels like this rebounding prop should be at least 5.5.

Trends: Sure, the Pelicans had an easier path to beat the Clippers after Paul George was ruled out due to COVID, but a win is a win and they survived the play-in tournament. Now, they’re double-digit underdogs in a lopsided series against a Suns team that finished with the best record in the NBA.

That doesn’t mean you can overlook the dynamic duo of Brandon Ingram and C.J. McCollum, though. While Devin Booker and Chris Paul will likely outshine them in this series, the Pelicans became a lot more dangerous after acquiring McCollum before the trade deadline. Although all indications point to Zion Williamson (right foot) returning to action next year, could we see him return at some point in this series if New Orleans has a chance to pull off a miraculous upset? We’ll find out.

Top Player Prop: Jonas Valanciunas UNDER 17.5 Points. In Friday’s win over the Clippers, Willie Green proved that he’s going to play the hot hand when he benched Jonas Valanciunas in favor of Larry Nance Jr., who was outplaying him. Jo-Val played only 25 minutes in that playoff-clinching win, and while it may seem like a matchup against Deandre Ayton would necessitate Valanciunas’ size, Jaxson Hayes and Nance could always eat into his minutes, as seen when their season was on the line. Overall, 17.5 is a big number for Valanciunas to hit given these new concerns about his playing time and role. Regardless of whether he plays his normal minutes or not, he’s gone OVER this number in just one of his past six games.

BetQL subscribers can see more betting trends and all of our best bets, including NBA player props, with star ratings for every game. Sign up for a BetQL Day Pass!