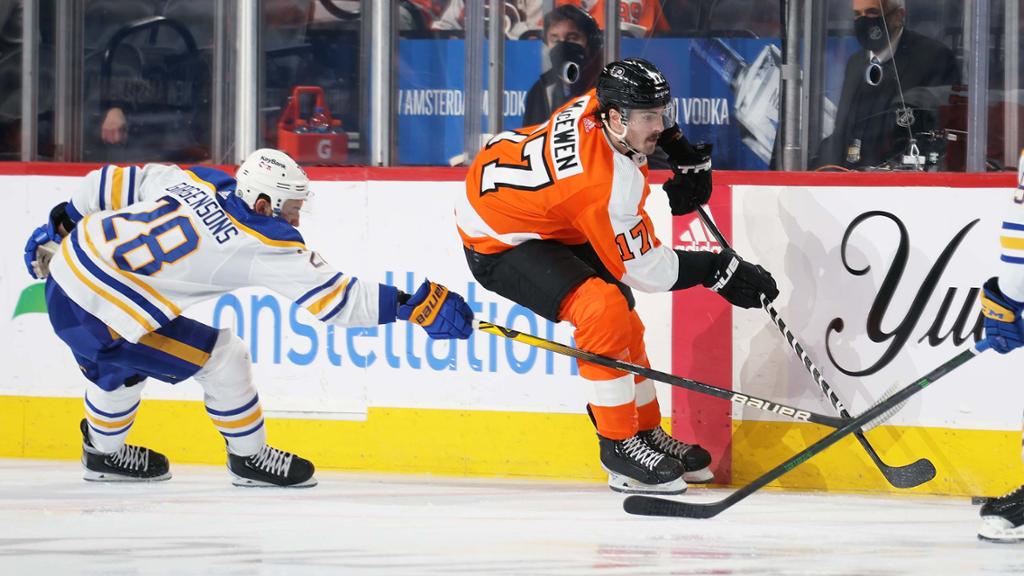 The Philadelphia Flyers lost to the Buffalo Sabres, 5-3, at the Wells Fargo Center on Sunday evening. The Sabres swept the three-game season series between the teams.

In the first period, an early goal by Kevin Hayes (9th) was answered 7:20 later by a Victor Olofsson tally (power play, 19th). Late in the opening period, an Anders Bjork goal (5th) on a Flyers turnover and ill-timed attempted line change sent the Sabres to the locker room with a 2-1 lead.

At 1:20 of the second period, Noah Cates (3rd) poked the puck over the goal line in a scramble near the net. After a replay delay to determine whether to award a goal or a penalty shot for the puck being covered in the crease, Cates was credited with a goal. Olofsson’s second power play goal of the game (20th of the season) restored a Buffalo lead at 3-2. Tage Thompson made it 4-2 at 14:22.

Felix Sandström stopped 35 of 39 Buffalo shots in a losing cause. Dustin Tokarski earned the win with 30 saves on 33 shots.

The bad line change that resulted in the second Buffalo goal was the sort of lapse in detail that has plagued the Flyers this season. Special teams, once again, also proved to be costly for the Flyers in another loss.

1) Owen TIppett had a scoring chance from the doorstep on the first shift of the game.

At 1:16, the Flyers took a 1-0 lead. Hayes put the puck between Owen Power’s skates, whiffed on an initial shot attempt and then scored on a second effort. The assists went to Noah Cates and Ivan Provorov.

Shots were 8-3 Flyers through 3:45. The Flyers survived a Keith Yandle turnover off a grenade of a pass from Ronnie Attard.

A rebound eluded Yandle near the Buffalo net. Caught above the puck, he took a hooking penalty at 7:43. The Sabres power play converted it into an Olofsson one-timer goal from the right dot at 8:36 The assists went to Rasmus Dahlin and Peyton Krebs.

The Sabres iced the puck at `11:00. Shots on goal were 10-5 Flyers. The Flyers won the ensuing draw, and Nate Thompson made a nice pass to Zack MacEwen.

The Flyers went on their first power play at 13:07 as Kyle Okposo tripped up Konecny at the Buffalo blueline..A shot from Frost from the top of the left circle through an attempted van Riemsdyk screen was tracked and stopped by Tokarski.

The Sabres took three straight icings with under 4;00 remaining in the first period. Frost won a draw cleanly for a quick shot by Joel Farabee on the second.

Philly got caught on a bad line change attempt after a JVR-tipped Attard clearing pass was intercepted by Dahlin just behind the red line. Buffalo’s Bjork moved in and scored to make it 2-1 at 17:34.

In the dying seconds of the period, Frost and Bobby Brink attempted to work a give-and-go but the buzzer sounded as Brink returned the puck to Frost inside the hash marks.

3) At 1:02 of the second period, Cates tracked down the puck behind the Buffalo net and centered to Konency. Tokarski made a glove save.

At 3:31, Hinostroza tripped Attard behind the Flyers net. Philadelphia went to their second power play. Nothing came out it. But shots on goal for the period were 6-1 as the Flyers iced the puck at itsf expiration.

A Konecny turnover on a blind backhand pass in the offensive zone and a Buffalo counter led up to a Sanheim holding the stick penalty at 7:44. One second before the power play expired, an Olofsson shot from the right circle found the net. The assists at 9:43 went to Dylan Cozens and Krebs

Dahlin stickhandled into the Flyers zone and accidentally high-sticked Zamula in the face. The whistle blew at 12:36. No penalty resulted.

Provorov tried to put the puck off the boards on the backhand in the defensive zone and turned it over to Skinner. Thompson moved over the middle and fired a wrist shot past Sandström for a 4-2 Buffalo lead at 14:22. The lone assist went to Skinner.

A stretch pass to Konecny made it to the winger, who moved in on Tokarski. The five-hole shot attempt was stopped.

4) The Sabres out-shot the Flyers by a 14-8 margin in the second period (attempts were 22-14 Buffalo). Scoring chances were 10-8 Flyers (6-3 high danger in Philly’s favor). However, it was a rather sloppy period on both sides and yet another second period that the Flyers lost on the scoreboard.

5) The first four minutes of the third period were rather low-event with a combined three shots on goal (2-1 Bufflalo) and no scoring chances of note. Right after that, Hayes fed Konecny on an odd-man rush but Konecny fired wide of the net from the right circle. Buffalo countered the other way and Sandström had to come up big to stop Skinner.

Farabee centered Brink and Oskar Lindblom on a shift as Frost was bypassed. With 12:17 remaining, Sandström tracked and cleanly saved a Dahlin point shot. Frost’s next shift was on left wing of Thompson’s line but he subsequently returned to the third line.

With 7:12 remaining, Laughton hit the post and crossbar on a breakaway chance, At the other end Sandström stopped a Henri Jokiharju point shot.

On a chance off the rush, the Flyers drew within 4-3 at 14:07 Sanheim fed Oskar Lindblom. The initial shot was stopped by Tokarski but MacEwen potted the rebound.

With about 3:30 left in regulation, the Thompson line received a shift. Sandström stopped a Skinner shot. The Flyers pulled Sandström for a 6-on-5 with a little more than two minutes left.

Buffalo iced the puck at 18:51. The Fyers called timeout. Sanheim was unable to keep the puck in and Thompson scored an empty netter assisted by Skinner and Mattias Samuelsson. Third period shots were 16-9 Buffalo.