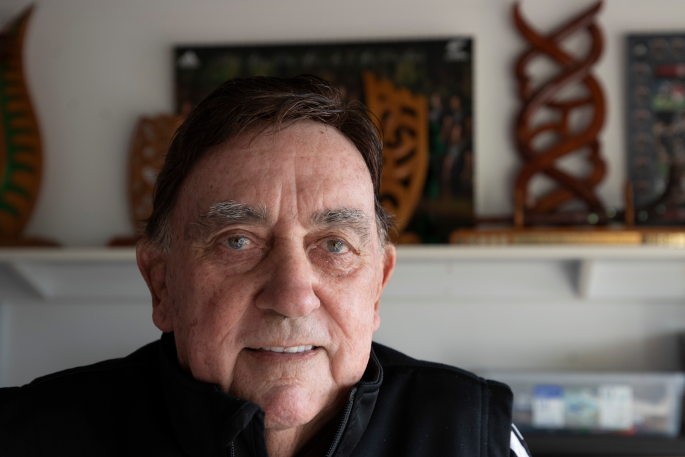 Active advocate for tennis and Māori sport for more than 50 years, Richard ‘Dick’ Garratt is being awarded the New Zealand Order of Merit as part of the Queen’s Birthday and Platinum Jubilee Honours List 2022.

Through the Aotearoa Māori Tennis Association, he has organised coaching camps for Māori rangatahi, assisted elite juniors to United States tennis scholarships, and fundraised for groups of players to play in the Queensland Seniors Tournament for the last decade.

He was instrumental in assisting Dame Ruia Morrison’s return to Wimbledon in 2013. He is the Chief Executive of Te Tohu Taakaro o Aotearoa Charitable Trust which administers the Aotearoa Māori Sports Awards, and was instrumental in compiling a history of Māori tennis titled ‘He Hītori o te Tēnehi Māori’.

He is also a life member of Mangere Central Tennis Club, Manukau Rovers Rugby Football Club and the Aotearoa Māori Tennis Association. Richard was awarded the role of Honorary Vice President of Tennis New Zealand in 2022.

“I wouldn’t be able to do this without my wife Desrae, she’s a top tennis umpire too,” says Dick.

“She has helped me so much along the way.”

Dick says that the thing that has kept him going in tennis is the community.

“In Māori we call it whakawhanaungatanga. It’s the process of establishing relationships and getting to know each other.”

Dick says that he and his wife Desrae played mixed doubles in tennis for 47 years.

“Not many couples last that!” Dick laughs.

“The last 26 years I’ve been part of Māori tennis as well. That was a huge expansion of doing things.

“We’d been behind Dame Ruia Morrison and trying to get her promoted and recognised for her achievements, which was well overdue. A group of us fundraised and were able to able to achieve that, and that was a huge highlight.”

Dick says that the reason he has contributed so much to Māori sport is his whakapapa, Ngāi Tūhoe.

“When I moved to Auckland from Te Teko to Auckland, the last president of Māori tennis passed away and people asked if I wanted to take over the job.

“With all the Māori sports awards work I did over the years, it felt like a fairly natural fit.”

Dick adds that he has had great mentors along his journey.

“I worked with Albie Pryor, who’s a legendary rugby player from Te Teko. I also worked with Pat Walsh. We all mixed together for sport and Māori youth. They were great characters, and even though some of their methodology may not work these days, but it was great grounding I had with them.

“Then there was the likes of Sir Tamati Reedy and Lady Tilly Reedy, they are very educational people, and are great mentors for both worlds of education and sport.”

Dick says that he was “a bit reluctant” to receive the award at first.

“I have been disappointed in the past that people such as Albie Pryor and Pat Walsh never got honoured. People should have put them forward, but I got a lot of pressure from my wife and Sir Tamati Reedy and Lady Tilly Reedy to accept it.

“I was very humbled by that, I don’t rate myself as anything fantastic. Most people know I’ve just enjoyed myself in a long career of tennis and rugby, just out there with the people.”

Dick adds that his wife and extended whānau are a big part of his achievement.

“They’ve always been there and shown support. This honour is really for them as well.”