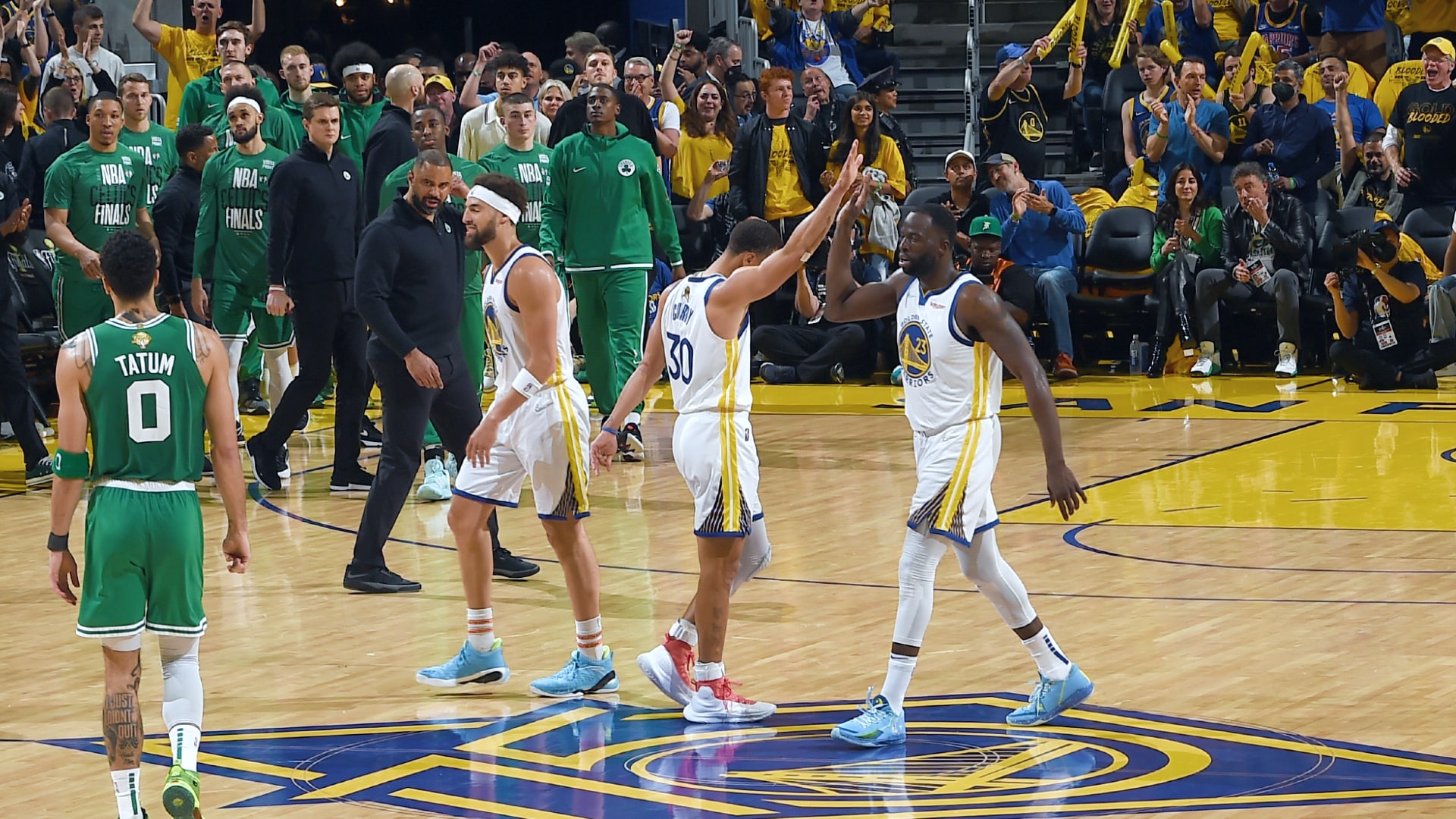 SAN FRANCISCO — The NBA Finals now shifts toward Boston, although there is a question whether the series shifted to the Warriors. Such is the case after Sunday, when Steph Curry broke free and the Warriors broke Game 2 open after three quarters and cruised to a 19-point series equalizer.

Here are five takeaways from Game 2, including what doomed the Celtics and why the Warriors aren’t completely in the clear just yet:

The defining shot of this series didn’t win Game 2, but essentially evened the NBA Finals anyway. Because, really: Any and all suspense evaporated the moment Jordan Poole’s third-quarter heave from nearly midcourt beat the buzzer, ripped the nets and silenced the Celtics.

“We talked about it in practice a couple of days ago, that somebody was going to hit a halfcourt shot in this series, whether it was me or Steph,” Poole said. “I just happened to hit it.’

To understand the magnitude and context of the shot, it’s necessary to examine what led to that symbolic moment. The Warriors broke away from a two-point game at halftime, pushed the Celtics on their heels, used a Steph Curry 3 to signal red alert, then another from Poole to sound alarms.

The Celtics by then were weakened and wobbly and, subconsciously, perhaps saying to themselves: Well, we got a split, we good. You see this all the time in a playoff series from a road team that’s somewhat satisfied with winning one of two; their body language concedes the next game to the team playing with a greater sense of urgency. They don’t put up the same spirited fight as before, especially if they fall behind big.

Anyway: Poole took a step inside midcourt and his aim was true. The ball swished, Chase Center erupted, the lead was suddenly 23 points and unlike Game 1, Celtics had no fourth-quarter reply after getting the wind knocked out of them.

🔊 Jordan Poole wired for sound during his Q3 buzzer-beater! pic.twitter.com/h9RWGKVK0W

So the Warriors withstood a rapid start by Jayson Tatum — who had 21 points in the first half — and now play the next two games at TD Garden, where the Celtics have been strangely average this postseason, losing twice to Miami and Milwaukee in the previous rounds. Which means this series, after some momentary Game 1 suspense, could be anybody’s.

Well, it was fun for Boston while it lasted: a game. After pulling a surprise and dropping 3s and romping around the floor and playing above their pay grade overall in Game 1, all players in the rotation not named “Jayson Tatum” or “Jaylen Brown” crash landed with quite the thud Sunday.

But everyone figured those 15 minutes were probably fleeting anyway. That’s usually how it goes in the Finals, where the cream rises and the other players ultimately settle into their roles. The latest example was Game 2 when Boston’s supporting cast, well, settled down.

Al Horford was the leading scorer for the Celtics in Game 1 with 26 points. He was scoreless in the first half of Game 2, finished with a deuce. Derrick White went from 21 to 12, Marcus Smart from 18 to two, and none of the others — Payton Pritchard, Grant Williams, Robert Williams III — put any fingerprints on Game 2.

“We just didn’t get it done tonight,” Horford said.

And to add injury to insult, Williams pulled up gimpy during the game, done after only 14 minutes. This bears watching between now and Game 3, because the center has dealt with a knee issue all postseason. Boston was forced to use Daniel Theis and the results were shaky; Theis was noticeably rusty, couldn’t provide much as a scoring option and generally seemed ill-suited against the quicker Warriors.

Meanwhile, the script flipped and the most resounding role players were with those of the Warriors, led by Gary Payton II. The swingman, playing his first game since falling hard and breaking his elbow in the Memphis series, chipped in seven points with solid help defensively.

He has 63 points in seven quarters played, earning an early night off Sunday because his work was done. We don’t know the identity of the best team yet in a series that’s tied at one apiece, but the most impactful player has been Curry.

That’s subject to change, of course. Until and unless it does, Curry has pole position on Finals MVP and remains the most significant worry for the Celtics, who haven’t slowed him or showed him a defensive strategy that he hasn’t seen or mastered before.

Curry finished with 29 points Sunday and was punishing in the pivotal third quarter when the Warriors seized control with 14 of their 35.

“I think our offense is always a lot of Steph,” Draymond Green said. “Even when [Kevin Durant] was here, our offense started with Steph. That’s the way it’s going to be.”

Just as well, Curry was sharp defensively Sunday and, in that sense, was part of a unified effort on that end of the floor for Golden State, for whom he provided three steals while keeping the Boston guards mostly quiet.

During their playoff journey to this point, the Celtics were most vulnerable whenever they slipped into a perplexing state of brain-lock. They had 24 turnovers — that’s no typo — in a Game 3 loss to Miami. A few similar occurrences cropped up in that Eastern Conference final and also the previous round against the Bucks, all amounting to losses.

Maybe it was only a matter of time before this bit them again, and such was the case in Game 2. The Celtics were constantly careless and too often offering “my bad” acknowledgements. Their 19 turnovers helped the Warriors to 33 points, a staggering amount of punishment that proved too much for Boston to overcome.

“We’re a really good team when we take care of the ball,” said Tatum. “But we have those lapses where we pile on turnovers and dig ourselves in a hole.”

Warriors’ physicality helps them ‘speed up’ the Celtics in Game 2.

Much of this fell on Smart. He’s the point guard, although it’s questionable whether he’s the team’s most reliable or purest ball handler. Over the past four years, that duty was assigned to Kyrie Irving and then Kemba Walker, and when those two eventually imploded, Smart was handed the keys almost by default.

He did a credible job this season. And yet Smart was exploited Sunday, his mistakes magnified: he missed five of his six shots, had five turnovers and never created for teammates or generated much offense. At times, he was more of a liability than anything. When this happens, the Celtics often lean on White and Pritchard, except neither was much better.

The Warriors and Draymond Green had something to do with those turnovers, too, by being physical and annoying and somewhat successful in stealing the Celtics’ concentration. Yet the self-inflicted miscues hurt the most.

5. Warriors keep Klay on the floor

The fourth quarter of Game 2 was nothing like the previous game, meaning, it lacked drama. Well, with one small exception.

Despite leading for 20-plus points for much of the quarter, the Warriors kept Klay Thompson in the game for eight of the final 12 minutes. It was a peculiar sight, having a starter run with subs in a rout while the other starters toweled off and fans began beating the traffic, but there was a purpose to it.

The Warriors wanted Thompson to sink shots, even if it came against inferior competition, and maybe fortify his confidence. That fourth quarter was a glorified practice, which he needed, given the way his Game 2 went to that point.

On a night when almost everything went right for the Warriors, Thompson remained in a funk. He missed nine of his first 10 shots and finished only 4-for-19, connecting on just 1-for-8 from deep. That lone 3-pointer triggered the Warriors’ third-quarter run, but otherwise? Zilch. The Warriors are still waiting for Thompson to put his stamp on this series, as he did many times prior to his two-year injury absence.

Maybe, eventually, this will happen. Thompson isn’t one to lack confidence; his 19 attempts are proof of that. After suffering from those leg injuries and missing so much time, Thompson was eager to return to the Finals and re-establish himself as a shooter to be feared.

Perhaps it won’t matter and the Warriors will capture the series without much from him. Most likely, against a solid Boston defensive team, Thompson’s efficiency could mean the difference between winning and losing a title, because Steve Kerr has shown no desire to pull him from the starting lineup or reduce his minutes.

“Klay had a tough one, but that happens,” Green said. “We know he’ll make shots as this series continues.”

Shaun Powell has covered the NBA for more than 25 years. You can e-mail him here, find his archive here and follow him on Twitter.

The views on this page do not necessarily reflect the views of the NBA, its clubs or Turner Broadcasting.