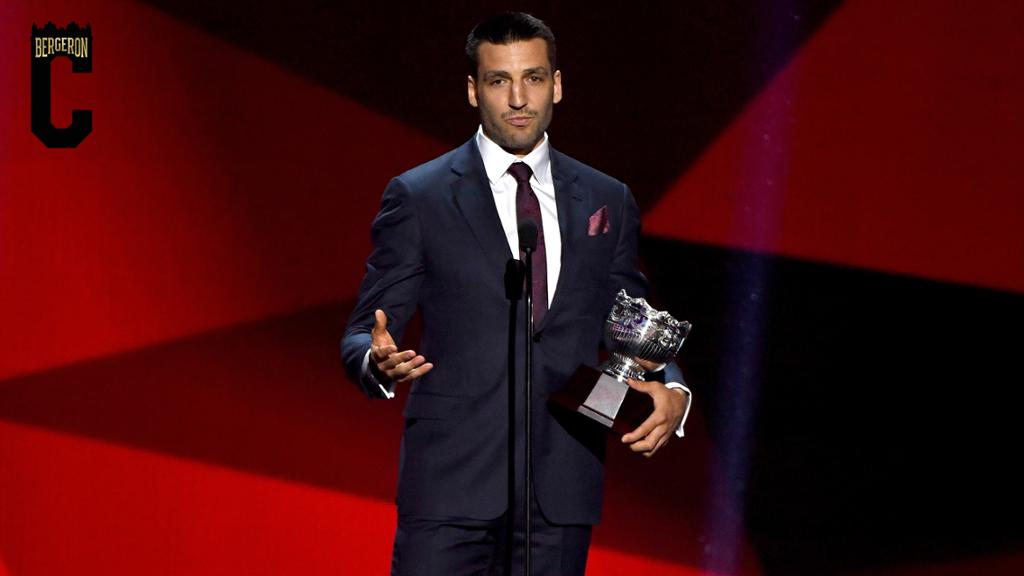 Despite breaking a National Hockey League record and becoming the only player in history to win the Selke Trophy – as the NHL’s top defensive forward – five times, the Bruins captain did his best to deflect the praise.

“It is an individual award, but you can’t get any of those without the help of all your teammates. I said that in my acceptance speech – there’s so many people to thank. There’s a reason why. I’ve been fortunate enough to play on great teams and to win five Selkes. It goes to them, obviously. As I said, it’s humbling. It’s the only word I have.”

There is nothing modest, however, about the numbers.

Since the Selke Trophy was first awarded following the 1977-78 season, 27 different players have captured the honor, including nine who have won it multiple times. Bergeron now sits atop that list, breaking a tie that he had held with Montreal Canadiens legend Bob Gainey (winner of the first four Selkes from 1978-81) for the past five years.

“I don’t think it’s hit me yet,” said Bergeron, who received 165 of 190 first-place votes. “Maybe when I’m old and on my rocking chair, I might look back and think it’s pretty cool. But as of right now, it’s one of those things where you appreciate and you’re thankful. But for me it’s the friendship and everything that goes around the game of hockey that matters the most.”

The 36-year-old not only made history with his fifth Selke Trophy but with an unprecedented 2021-22 campaign, which by many accounts was the most dominant defensive performance of his storied 18-year career.

“The structure of the way that we play as a team, the way that we’ve played for a long time in Boston, has helped me tremendously,” Bergeron said when asked how he managed to have so much success so deep into his career. “I’ll say it again: teammates, linemates…positioning, trying to read plays – no one’s going to be shocked today if I say I’m not the fastest skater out there. But I’d like to maybe put myself in a position where I don’t have to do the extra strides or waste the energy for no reason.

“I think that over the years I’ve gained experience and I’ve learned to put myself in a position to be in the best position defensively but also to go back on the attack. It’s experience over time that you start reading plays and your brain works a certain way.”

Bergeron, once more of course, credited his teammates, particularly his longtime linemate Brad Marchand, who finished 12th in the Selke Trophy voting and has three times finished in the top 10 during his 13-year career.

“And I’ve been playing with Marchy for over a decade so that also helps a lot,” said Bergeron. “Amazing teammates as well on the back end, obviously [Zdeno Chara] for a while, Charlie McAvoy, just to name a few…it’s hard to say one thing, but I think over time, over the years, it’s the experience and positioning and trying to read plays, where the play is gonna get to before it gets there.”

That desire to be a dominant defensive pillar, Bergeron said, began during his youth hockey days. But he estimated that it was not until around 2010, some six years into his Bruins career, that he felt his defensive game elevated to an elite level.

“I think I’ve always taken pride in the defensive side of my game. Even growing up – yes, I wanted to score goals, but I also didn’t want to get scored on,” said Bergeron. “It’s something that my coaches preached on, especially in juniors and early on in the NHL with [Bruins coaches] Mike Sullivan and then Claude [Julien] and Bruce [Cassidy], obviously. I’ve learned a lot from a lot of different coaches, different players, teammates, even opponents.

“You look at guys [from other teams] and the way they play the game, and you try to implement some of those things into your game and to push yourself to be at your best and improve and don’t be satisfied with the product you put on the ice and try to get better.”

That drive to always continue to elevate is the same type of approach he tries to preach to his teammates when it comes to taking care of their responsibilities at both ends of the ice.

“You’re never out on a play,” said Bergeron. “That’s the only thing that I always tell my linemates on the backcheck; if you’re the fourth or fifth guy back, you’re never out. It’s always, ‘keep coming back because you never know. The puck might find you at some point or you might be able to make a good defensive play because you’re back on time.'”

Patrice Bergeron is the 2021-22 recipient of the Frank J. Selke Trophy.

The @NHLBruins captain was a runaway winner by the most decisive margin among his five Selke triumphs. #NHLStats: https://t.co/KJfbjl9hfr #NHLAwards pic.twitter.com/ciBIw9pMPW

Such an approach has served Bergeron quite well and helped him set another NHL record, as this year also marked the 11th consecutive season he has been named a finalist (top three) for the Selke, breaking Wayne Gretzky’s record of 10 straight nominations (Hart Trophy) for an NHL award.

“You want to be known as a consistent player,” said Bergeron. “It is nice to be recognized that way. I’ve said that many times, that’s the way I learned to play the game and that’s the way I want to play the game. I don’t think I would have changed the way that I play or how I’ve done it for the last 18-19 years now. I think I’ve learned a lot. So many great people, coaches, that have made me a better player.”

A player that Bergeron admits he never could have imagined when he first set his sights on the National Hockey League.

“Not at all. If I recall my first few years, you’re just happy to be there, you just want to stick and find a way to stick around for more than a couple years,” said Bergeron. “You want to learn, you want to be a sponge. Everything is so new and incredible really. As the years progress, you realize how lucky we are and how fast it goes. You have to be thankful and appreciate every moment. So no, I guess I never thought I would get this far in the league and that I would be able to experience so many great things.

“My dream was always to play in the NHL. Never in my wildest dreams could I have imagined breaking an NHL record…there’s history in the game and to me it matters a lot, the guys that were there before me and before us.

“It’s the history of the game. That’s the beauty of this league and that’s why it’s so special to be a part of.”