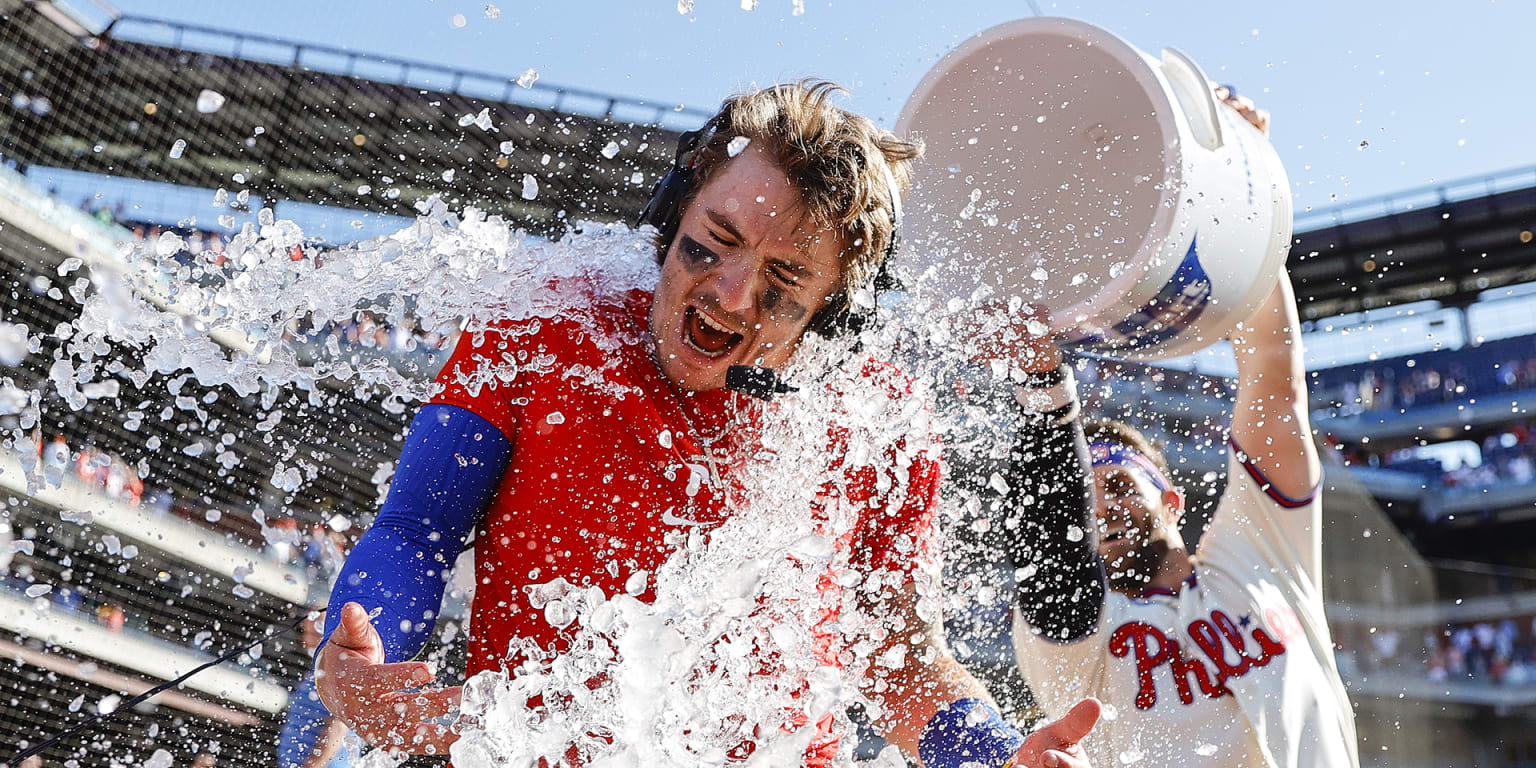 Not his game-tying grand slam in the eighth inning on Sunday at Citizens Bank Park, although anybody who knew anything about Harper’s history with Raisel Iglesias probably had a hunch. No, Harper called Bryson Stott’s three-run walk-off home run with two outs in the ninth in a 9-7 victory over the Angels.

Stott’s shot into the right-field seats capped a whirlwind weekend in which the Phillies dismissed former manager Joe Girardi, replaced him with interim manager Rob Thomson and swept the Angels to win four consecutive games for the first time since mid-May. The Phillies are 25-29, but everything felt differently to them as they left for Milwaukee.

“I didn’t really know what was going on once it happened,” Stott said. “[Kyle] Schwarber told me that he’s never seen me speechless.”

Consider everything that led to that moment.

The Phillies were 22-29 on Friday morning when president of baseball operations Dave Dombrowski dismissed Girardi and promoted Thomson. They won Friday night, 10-0. They won Saturday night, 7-2.

The Angels carried a 6-2 lead into the eighth on Sunday. But Odúbel Herrera hit a leadoff single, Johan Camargo reached on a fielder’s choice to put runners at the corners and Schwarber walked with one out to load the bases.

He struck out Rhys Hoskins swinging for the second out.

Everybody remembers Harper’s walk-off grand slam against the Cubs in August 2019. This moment felt like that one. Harper was 3-for-5 in his career against Iglesias, including home runs in his last two plate appearances against him in 2018. Harper’s other hit was a walk-off single at Nationals Park in 2017.

“A lot can change in those couple years,” Harper said. “He’s really good out there. He’s got really funky stuff that he throws. I was just trying to get something over the plate and stay through something and do a job.”

Harper crushed a 3-2 changeup into the second deck in right. He looked into the dugout, pumped his fists and shouted.

“When you grow up, you hit those homers in your backyard,” Harper said. “You dream about these moments in the big leagues, right?”

The Phillies allowed a run to score in the ninth, but Alec Bohm hit a one-out single to left in the bottom of the inning. Bohm had one hit in his previous 28 at-bats entering Sunday. He was so frustrated after striking out early in Saturday’s game that he bashed the bat rack repeatedly with his bat.

The final blow struck his chin and cut him.

Blood dripped down his neck.

“I was in the pit, man,” Bohm said. “Everybody goes through it. Look over there. The best player on the planet. Right? Struggling.”

Angels superstar Mike Trout was 0-for-11 with one walk and four strikeouts in the series. He is hitless in his last 26 at-bats.

It is the worst stretch of his career.

“Yeah, I maybe overreacted,” Bohm said. “Sometimes it maybe takes a little extra to get you to learn your lesson. … I think I learned my lesson about handling it. That’s the difference. You look over there. You see him. He’s not doing that.”

Didi Gregorius hit a two-out single to left-center field. He rejoined the team Sunday because Nick Maton got placed on the 10-day IL. The Phillies did not plan to play Gregorius, but Camargo wrenched his right knee in the eighth. The Phillies needed Gregorius. It was his first hit since May 4.

It set up Stott, who dropped his barrel on a 3-2 curveball. The ball was well struck, but it was not a rocket like Harper’s. Corey Knebel, who allowed the go-ahead run to score in the ninth, watched from the dugout.

He lost the ball at one point.

“I thought it was going to chainlink,” Knebel said. “But then I saw Stott turn and look at us.”

That’s how he knew the Phillies won.

“It’s pretty cool being able to play with one of your best friends, seeing him in that opportunity, going up there and doing that,” Harper said about Stott. “And him legit being one of your best friends, right? Everyone talks about friends and things like that, but he’s part of the inner circle that I call friends. Hanging out with him on Saturdays, Sundays watching football. It’s a really cool moment. For our whole family, too. … What a moment. What a moment for him, the fans, the organization. Everybody. Bryson put us on his back.”