Avalanche Days with the Cup Round Up 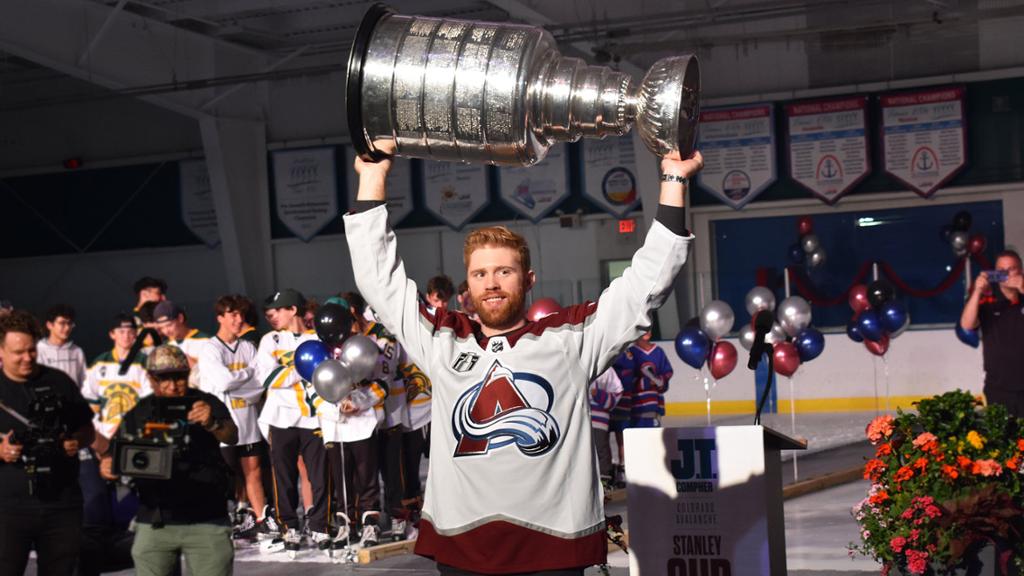 Check out how each each member of the 2021-22 Colorado Avalanche Stanley Cup winning roster spends their own respective day with the coveted Stanley Cup.

Tweet from @keeperofthecup: Its official! For the first time in the history of the #StanleyCup the team name and year are engraved prior to the @Avalanche player days. Rest of the engraving will take place in October. @nhl@HockeyHallFame pic.twitter.com/vQqczInrdN

The Avalanche Cup days kicked off in Sorel-Tracy, Quebec on July 9, with Nicolas Aube-Kubel. The former Avalanche forward – who signed with Toronoto this offseason as a free agent – took the Cup through a parade around his hometown and on a boat through the confluence of the Richelieu River and the St. Lawrence River, all while sharing it with family, close friends and the community.

As part of Quebec tradition, Aube-Kubel ate poutine out of Lord Stanley as well as Gibelotte, a traditional soup that originated in his hometown of Sorel-Tracy.

Tweet from @Avalanche: Nic is here for his hometown. Champagne showers for everyone!#GoAvsGo pic.twitter.com/I2aQ2sMPhK

Tweet from @Avalanche: Nic prepared a traditional soup, Gibelotte, from his hometown of Sorel.And now the boat takes the Cup down the river!#GoAvsGo pic.twitter.com/8nJnC6R7QX

The Cup continued its tour in Quebec as it went four hours north to Roberval, the hometown of defenseman Samuel Girard. Girard spent the day hosting a parade through town and also shared the Cup with his family, close friends and the community.

Tweet from @Avalanche: The Stanley Cup is on the move!Check out some photos from the weekend as G and NAK each had their own days with the Cup in Quebec. #GoAvsGohttps://t.co/agfgmilruD

On July 15, 2022, the Stanley Cup returned stateside to Northbrook, a suburb of Chicago and the hometown of Avalanche forward J.T. Compher. Compher spent the day first eating his mom’s famous chocolate chip pancakes out of the Cup. Then, he took the Cup around his hometown and to a local firestation all while sharing it with family, friends and the community.

Tweet from @NorthbrookGOV: Today, President Ciesla proclaimed Friday, July 15, 2022 as J.T. Compher Day in Northbrook! We congratulate J.T. and @Avalanche on winning the Stanley Cup, and we’re very proud that J.T. can call Northbrook his hometown. Thank you for bringing the Stanley Cup home to Northbrook. pic.twitter.com/l5AACFplMg

The Cup continued a stint in the U.S. as it made its way over to Columbus, Ohio to visit Jack Johnson. The veteran defenseman spent the day sharing taking it around town and even to a local ice cream shop where his children ate a hot fudge ice cream sundae from the silver trophy. He also shared his impressive hardware, including a silver Olympic medal that he won with Team USA in the 2010 Winter Olympics in Vancouver, with his brother-in-laws A.J. Hawk, who won a Super Bowl and Brady Quinn, who won multiple awards as a quaterback for Notre Dame, as well as with his sister-in-law Alicia Quinn, who won a silver medal at the 2008 Summer Olympics as a gymnast.

To conclude the first leg of U.S. cities, the Stanley Cup went down south to Charleston, South Carolina to spend the day with Avalanche Head Coach Jared Bednar.

Bednar first took the Cup back to his coaching roots with the Charleston Stingrays of the ECHL, as he is the only coach ever to have won at the ECHL (Kelly Cup), AHL (Calder Cup) and NHL (Stanley Cup) levels. He then took the Cup off the coast of Charleston on his boat.

Tweet from @TomGulittiNHL: Fans are lined up to get their photo with Jared Bednar and the Cup pic.twitter.com/orL8mpYr2a

Tweet from @TomGulittiNHL: Jared Bednar won the Kelly Cup with the South Carolina Stingrays as a player (1997, 2001) and coach (2009). Today the Colorado Avalanche coach returned to the Stingrays practice rink with the Stanley Cup.(He also coached Lake Erie to the Calder Cup in 2016) pic.twitter.com/9Ax1iLAqFD

Tweet from @TomGulittiNHL: Jared Bednar took the Stanley Cup out on his boat off the Charleston coast this afternoon. (Photos from ���@MikeBolt4��� ) pic.twitter.com/vdkSVRj9c2

After the stateside stint, the Stanley Cup ventured over for its European tour beginning on July 22, in Pilsen, Czechia.

The Avalanche goaltender took the Cup through town on an old USA military vehicle. He then went on stage in front of his hometown, made a speech, took photos with fans and drank local Pilsner beer out of the Cup.

Tweet from @keeperofthecup: The day started in the “City of Beer” Plzen, Czech with Pavel Francouz and ended with drinking pepermint rum with former teammates. #stanleycup @NHL @Avalanche@HockeyHallFame pic.twitter.com/gwU1fS00nj

The Stanley Cup continued its European tour as it visited Augsburg, Germany, the hometown of former Avalanche forward Nico Sturm.

Sturm brought the Cup to Augsburg Town Hall and shared it with the local mayor. He then took the Cup to a celebration at Curt Frenzel Stadium, the rink of Augsburger of the Deutsche Eishockey LIga, Germany’s top-tier professional league, where the stands were filled with hundreds of fans.

Tweet from @NHLdotcom: Nico Sturm takes Stanley Cup on a tour of Augsburg, Germany on Saturdayhttps://t.co/Yg4d53fneh

Colorado’s captain Gabriel Landeskog got to take the Cup around his hometown of Stockholm, and the capital of his native country Sweden.

Landeskog first took the coveted trophy to his elementary school and then over to a local arena where he played when he was 15 and 16 years old. There, he hosted a meet-and-greet with fans. Afterwards, he hosted a gathering for family and close friends to enjoy his achievement and the Cup.

Tweet from @Avalanche: Any guesses where Lord Stanley is 👀#WhereIsStanley #GoAvsGo pic.twitter.com/gBePC0hpgA

Tweet from @Avalanche: Oh Captain, My Captain! Landeskog is taking Lord Stanley all around his hometown, beginning with the elementary school he attended.#GoAvsGo pic.twitter.com/Jxl9aI4Fv7

Tweet from @Avalanche: Next, they visited the arena and team he played with when he was 15 and 16 for a meet and greet!#GoAvsGo pic.twitter.com/YPHkbjueFt

The Cup stayed in Sweden as it returned to the hometown of former Avalanche winger Andre Burakovksy, who had previously won the Stanley Cup in 2018 with the Washington Capitals.

Tweet from @TomGulittiNHL: Andre Burakovsky has the Stanley Cup back in Malmo today. He also had it there in 2018 pic.twitter.com/8NfLnBmpho

On July 29, 2022, the Cup traveled to Finland to Piikkio, the hometown of Avalanche forward Artturi Lehkonen, who scored both the Western Conference Final and Stanley Cup Final clinching goals.

Lehkonen took the Cup to his childhood home, shared it with family and his four siblings. He also took the Cup to a sauna with some friends and to rink he played in during his early teen years and the Sports Science Lab, where he currently works out in the summers.

Tweet from @Avalanche: ��� And the voyage continues 👀#WheresStanley #GoAvsGo pic.twitter.com/4Cd2vaJKmM

Tweet from @Avalanche: Lehky and Lord Stanley next paid a visit to the rink he played at when he was a young teen and the Sports Science Lab he works out at during the summers.#GoAvsGo pic.twitter.com/ghFZ9JtSC9