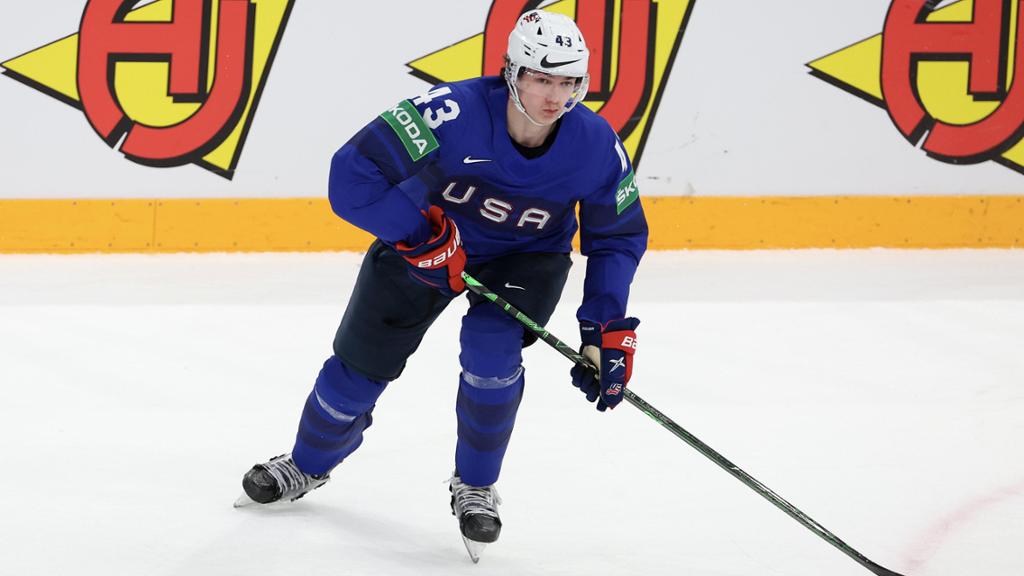 PLYMOUTH, Mich. — Luke Hughes has such an intense schedule, the New Jersey Devils prospect sometimes has a hard time keeping it straight.

The 18-year-old defenseman played one game for the United States at the 2022 IIHF World Junior Championship in Edmonton and Red Deer, Alberta, before the tournament was canceled Dec. 29 due to concerns surrounding the coronavirus.

He finished his freshman season at the University of Michigan and went to the Frozen Four, then played 10 games for the United States at the 2022 IIHF World Championship in Helsinki and Tampere, Finland.

Back to the 2022 World Juniors, which have been rescheduled for Edmonton from Aug. 9-20 and will start fresh. NHL Network will televise each of the games played by the United States.

“Just gearing up my body this summer and trying to get ready for the season at Michigan — or, well, no, for world juniors now and [to] try to win a gold medal,” Hughes said with a laugh at the National Junior Evaluation Camp at USA Hockey Arena last week.

“… I don’t really want to focus too far away or anything like that. I just go game by game and event by event, starting with world juniors. I’m super happy about that.”

Hughes, the No. 4 pick in the 2021 NHL Draft, has come a long way in a matter of months. Imagine where he’ll be at the end of his sophomore season at Michigan, when he’ll reevaluate whether to sign with the Devils.

In the United States’ lone game at world juniors the first time, at 3-2 win against Slovakia in the preliminary round Dec. 26, Hughes played 16:36, fifth among the six defensemen.

At Michigan, he had 39 points (17 goals, 22 assists) in 41 games, third on a team loaded with NHL prospects. He was the only freshman to finish among the Top 10 finalists for the Hobey Baker Award, given to the best player in NCAA Division I men’s hockey.

At the 2022 World Championship, he averaged 19:14 and had four points (one goal, three assists) in 10 games playing with and against men. He partnered with Seth Jones for at least a bit, and he faced forwards like David Krejci and David Pastrnak. The United States lost to Finland, 4-3 in the semifinals May 28, and to Czechia, 8-4 in the bronze medal game May 29.

“It was an unreal experience for me,” Hughes said. “Yeah, I mean, it’s super valuable. I learned a lot. It would have been nice to medal, but that’s the goal in these next two tournaments.”

Wait. These next two tournaments? Yes, after the 2022 World Juniors, Hughes is eligible to play in the 2023 World Juniors in Halifax, Nova Scotia, and Moncton, New Brunswick, from Dec. 26-Jan. 5.

But again, he’s going game by game, event by event.

Hughes said he has gained probably eight to 10 pounds this offseason, putting him at 6-foot-2, 189 pounds.

He has been skating at home in suburban Detroit with NHL players including Detroit Red Wings center Dylan Larkin and Winnipeg Jets forward Kyle Connor — and, of course, his brothers, Devils center Jack Hughes and Vancouver Canucks defenseman Quinn Hughes.

“I want to get better in the ‘D’ zone,” Hughes said. “I want to work my hands, work on my shot, get better at everything. Stick detail, closing. It’s not just one area or anything like that.”

Nate Leaman, who coaches Providence College and the United States world junior team, noticed a difference in Hughes from December to July at the first practice of the National Junior Evaluation Camp.

“I think his awareness on the ice improved,” Leaman said. “We did a lot of stuff where he had to read through some layers. I thought he was good, and he was poised, and he did that. He’s definitely grown in his game.”

Leaman said the United States would rely more on Hughes this time, and Hughes embraced that.

All of this should help Hughes’ development.

“I think that was a really good year for [Quinn] for developing and really prepared him for the NHL,” Hughes said, “so that’s what I’m going to do.”