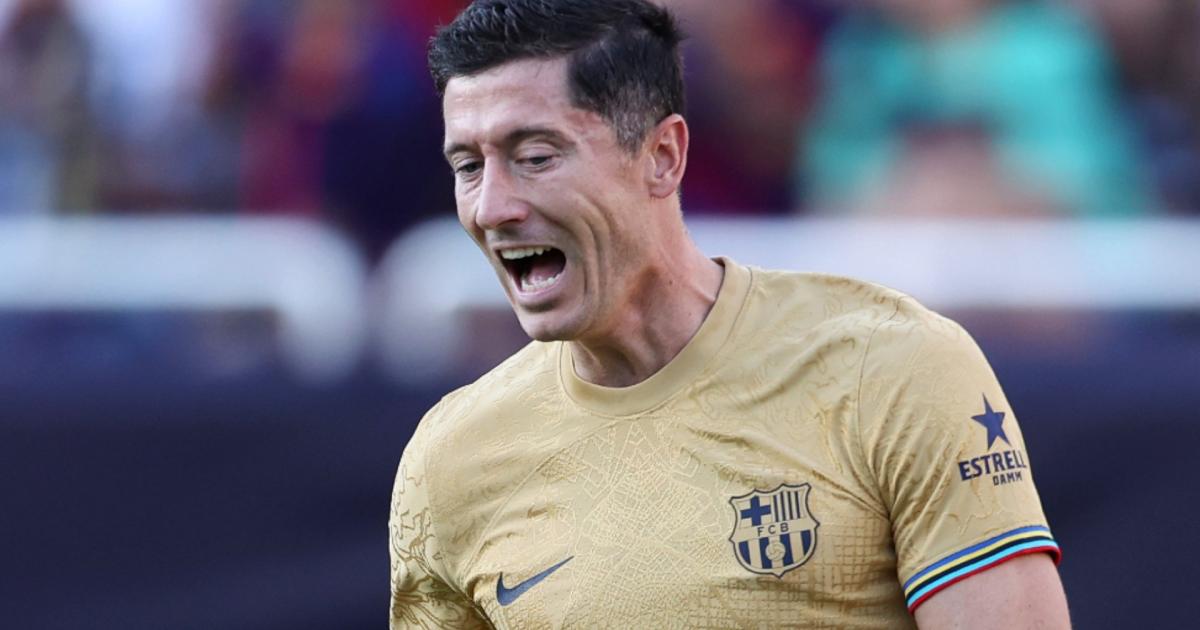 Three starts and still no goals for new Barcelona forward Robert Lewandowski, who failed to find the back of the net despite multiple opportunities in his club’s 2-0 friendly win over the New York Red Bulls in front of a pro-Barcelona sellout crowd at Red Bull Arena.

For the second straight match it was Ousmane Dembele who was the decisive player in the Barcelona attack. The Frenchman came across the field to combine with Raphinha and then ripped a shot into the far side netting. Memphis Depay took advantage of a defensive miscommunication to round out the scoring with three minutes remaining.

The New York Red Bulls held strong in the first half and nearly entered halftime with a goal-less draw. Some emergency defending and a handful of fine saves from goalkeeper Carlos Coronel kept the match tight, but Dembele found a way through just before the break.

Several of Barcelona’s best chances fell to Lewandowski, who either shot the ball right at the goalkeeper or missed the target. When RBNY’s backup ‘keeper Ryan Meara made the latest in the series of stops, Lewandowski wore a wry smile at his luck on the night.

Barcelona head back to Spain after their four-game U.S. tour with a haul of three wins and a draw. They will face Mexican side Pumas UNAM in their home stadium of the Camp Nou before opening the La Liga season against Rayo Vallecano in mid-August. The Red Bulls continue their push for the MLS playoffs in October and a quest for their first MLS Cup trophy.

If the series of matches in the USA was any indication, Barcelona supporters are going to have some serious fun this year. Wingers Raphinha and Ousmane Dembele produced so many moments of individual magic across the 10 days, but then against the Red Bulls they combined for one.

The instant chemistry that they’ve shown, and the fact that they can interchange flanks so easily means that opposing defenses are going to have a hard time shutting both of them down when they’re on the field at the same time.

Dembele, in particular, already looks to be in mid-season form and Barcelona would do well to just get him the ball and let him wreak havoc. He can break down defenses all by himself with his slalom runs. Among all the offseason personnel moves that were made, re-signing Dembele may have been the most important piece of business. He can unlock the potential of this Barcelona attack.

So what happened to the goal-scoring forward that Barcelona thought they had acquired in the Polish international? He’s known for burying his chances, but despite getting several of them against the Red Bulls, he still can’t find the back of the net. He’ll have one more friendly to try to break his duck, or else the pressure will really ramp up for the La Liga opener against Rayo Vallecano.

What seems to be occurring in the case of Lewandowski during this small three-game sample is a combination of bad luck, good defending, and some poorly placed shots. Lewandowski wants to do the clinical thing every time he gets an opportunity in the box, but the truth is that the penalty area is going to be crowded given how opponents like to sit back and frustrate Barcelona. At times Lewandowski might be helped by being a tad more inventive and less predictable with his finishing attempts.

Xavi: “Lewandowski is frustrated, but that is normal. It’s the same thing that happened to Luis Suárez when he came. He will end up scoring.” pic.twitter.com/PWihaNJnqY

87th min.: Goal Barcelona! Memphis Depay runs onto a ball over the top and when the RBNY goalkeeper and defender Sean Nealis fail to clear it, he pokes it away and then slots it into an empty net.

82nd min.: RBNY’s Daniel Edelman is sent off! That was a harsh decision by the referee. Edelman slid into Barcelona’s Pablo Torre, but studs weren’t showing. It was late, but it’s debatable whether it endangered the player’s safety. The Red Bulls are going to spend the final minutes with 10 men.

77th min.: Moments after Pablo Torre replaced Pedri and Ansu Fati nearly scored, RBNY goalkeeper Ryan Meara has to make an incredible finger-tip stop on a Barcelona cross deflected by his own defender. Nothing comes of the corner.

The Red Bulls have Zach Ryan come on for Curtis Ofori, who gets nearly 30 minutes on the field.

68th min.: Ansu Fati with a scissor volley that goes high over the bar and you can tell from his expression he feels he should’ve done better with that one.

61st min.: Three subs for Barcelona. It’s Miralem Pjanic (for Busquets), Alejandro Balde (for Jordi Alba), and Pierre-Emerick Aubameyang (for Raphinha). And Robert Lewandowski is apparently not leaving the game until he gets his goal. Updated lineup below:

60th min.: Gerard Pique gets a yellow card for a foul on Tom Barlow. It was late and ugly and the fans are booing Pique every chance they get.

58th min.: Lewandowski can only laugh it off. He still can’t score. This time it’s goalkeeper Ryan Meara with the stop over the bar.

56th min.: RBNY defender Hassan Ndam has words with Robert Lewandowski after the Polish star felt that Ndam nicked him on a challenge. Ndam is not backing down.

51st min.: The Red Bulls have a big chance with Omir Fernandez running the ball down the heart of the Barcelona defense, but he doesn’t pass it to teammate Tom Barlow and the chance fizzles out.

46th min.: Second half is underway and the Red Bulls march out a whole new XI. Barcelona also introduce a few changes.

Half-time: The Red Bulls held strong and came close to getting to the break at 0-0, but there was plenty of emergency defending and goalkeeping as the half went on. Robert Lewandowski still can’t get his goal, but while Lewa is more predictable in his movements and shots, Ousmane Dembele and Raphinha know how to improvise, and it paid off on the goal.

Dembélé scored more goals in this US tour (3⚽️) than he has scored for Barcelona in 32 official appearances last season (2⚽️) pic.twitter.com/Hp2JNbSIe5

40th min.: Goal Barcelona! Raphinha feeds Dembele on the right and his diagonal shot whizzes by the RBNY goalkeeper and inside the far post. That’s now three goals in two games for Dembele.

Dembele and Raphinha had switched sides and Dembele came all the way from the left and back to his natural right flank to find that goal.

38th min.: Now it’s RBNY’s Cristian Casseres getting a yellow card for a foul on De Jong in midfield.

30th min.: Lots of emergency defending of late for the Red Bulls, and it’s goalkeeper Carlos Coronel punching another shot by Lewandowski who can’t buy a goal so far.

28th min.: The Barcelona players are arguing every foul called against them. Ronaldo Araujo gets a yellow for kicking the ball away in frustration after he was called for a push-off foul on Cristian Casseres. But Araujo’s arms were outstretched and it was pretty clear.

24th min.: Lewandowski foiled again! Aaron Long and Carlos Coronel threw themselves at Lewandowski’s shot in the box and blocked it. But credit to Long for sprinting and staying step-for-step with Ousmane Dembele on a full-out sprint.

20th min.: Lewandowski comes close again. He dances around RBNY defender Sean Nealis and then blasts a shot over the bar. That was an impressive solo move.

15th min.: Best chance for Barcelona! Ousmane Dembele runs onto a ball in the Red Bulls box and fires first-time. It’s off the mark. Dembele has been plenty active. He looks like he’s ready to hit the ground running this season.

14th min.: Another good look from the Red Bulls. It’s Dru Yearwood with a dipping volley that just misses the crossbar. RBNY have been more threatening so far.

7th min.: And now on the other side of the field, Frenkie de Jong misses on an outside-the-boot pass meant for Ousmane Dembele. Easy pick-up by RBNY goalkeeper Carlos Coronel.

5th min.: First shot is from the Red Bulls. Cameron Harper takes it and it’s way off from outside the box. Good start by the Red Bulls.

4th min.: Nice defensive play by Andreas Christensen on Lewis Morgan, who is manning the left attacking wing for RBNY.

1st min.: We’re underway. Red Bulls are in red and Barcelona in gold.

2 mins from kickoff: Thierry Henry with a split jersey does the honors of the coin toss. He played for both clubs.

10 mins from kickoff: Not even The Rock would want to miss out on this match.

20 mins from kickoff: The Barcelona players take the field for warmups and it’s pretty clear that the Red Bulls might be the away team in their own building.

90 mins from kickoff: Here’s how the Red Bulls are looking ahead to a match they see as a measuring stick.

After a busy week of traveling, the Red Bulls are preparing to welcome FC Barcelona to Red Bull Arena for a friendly on Saturday.

Hear what we had to say about the upcoming match.#RBNYvFCB #RBNY

New Barcelona transfer acquisition Jules Kounde will be presented in Spain this week and is not currently with the club. The other player sure to miss out is Ferran Torres, who is expected to feature next weekend against Pumas. He is recovering from a foot injury.

Ronaldo Araujo and Pedri, who were given the night off against Juventus, are available again and Araujo starts. Frenkie de Jong will finally get to start, getting a chance to showcase his talent in midfield after playing at center-back in the last two friendlies.

It’s to be expected that most of the Red Bulls roster will get a run out against Barcelona, especially in the midst of a busy period which sees them playing six matches in 21 days. It’s also a way for head coach Gerhard Struber to maintain the intensity he hopes to see from his side as they seek to impose their pressing style of play on the 26-time La Liga champions.

USA: In the United States, Saturday’s friendly will be broadcast by regional network MSG Network, which is streamed on fuboTV. The match will also be streamed by the Red Bulls in-house via Red Bull TV.

Canada: OneSoccer, which is streamed on fuboTV, will carry the match for Canadian fans.