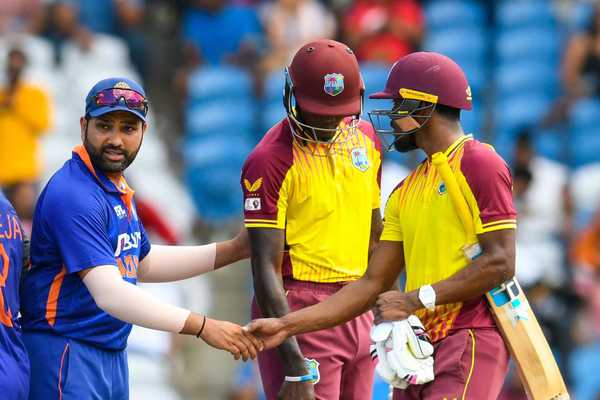 Fittingly, Obed McCoy picks up the Player of the Match award.

Oh boy – India would be left second-guessing their final-over call! Rohit backs Avesh for the final over, ahead of Bhuvi. But the young pacer oversteps first ball. Thomas smacks a six and four and seals the deal in two legitimate balls. WI level the series!

After a neat 17th over, he takes out Rovman Powell with a picture-perfect yorker! Another twist in the tale? His 6-run penultimate over leaves WI with 10 to get off the final over.

Twist in the tale?

Kings smokes a six down the ground to welcome Avesh Khan back into the attack but the bowler has the last laugh. Full, fiery, perfect yorker delivery and King fails to get his bat down in time. The set batter departs and India have an opening. Can they capitalise?

Caught and bowled. Length ball. Hetmyer is cramped up. Sends a low return catch but Jadeja ain’t missing that one.

A 39-ball fifty for King! He’s played a brilliant knock here to keep WI chase on the right track.

Pooran dances down but couldn’t quite get to the pitch of the ball. Miscues and the long-on has all the time in the world to settle under it. Eyes on the ball all through and it’s an easy take in the end. WI lose their second.

Finally a breakthrough for India. Kyle Mayers departs! Full and on the pads, Mayers flicks but he’s hitting against the wind. Easy take for Ashwin at the boundary line.

He’s already hit six of them, sparing neither the pacers nor the spinners. And now wraps sup a successful powerplay for WI with a six straight down the ground off Ashwin. WI 46/0

Back for the chase, and Brandon King gets it going with a first-ball four off Bhuvi.

Innings break: India 138 all out

Holder completes the formalities in the final over but it’s McCoy with the best T20I bowling figures for a West Indies bowler who takes the spotlight today. Struck with first balls both his overs in the powerplay to rattle the Indian top-order and then returns at death to pick a few with slower balls. Three in his final over, figures of 4-1-17-6 – stuff of dreams! Back in 15 for WI’s chase.

Ashwin sends a catch to Deep babckward point and Bhuvi is caught behind – though WI had to take a DRS review for that. But all’s well that ends well and McCoy is a happy man. Career-best 6/17 for him! What a day he’s had.

Jadeja holes out first to long-on, done in by a slower ball. DK is the pacer’s fourth victim, goes to pull and the fielder at shot fine completes a running catch.

Pulled, straight to deep midwicket, who takes it on the second attempt. Holder picks up his first wicket of the game.

Halfway there, and India have 75/4 on the board. How much will they make eventually?

Looks to slog the spinner and picks the fielder in the deep to perfection! Akeal Hossain strikes in his first over as well, and Pant’s entertaining little cameo comes to an end on 12-ball 24.

Pandya hacks his first six of the game to keep India going. India are 56/3 after the powerplay.

Short ball, there’s pace and there’s extra bounce. Shreyas Iyer unfortunately goes slashing and is undone by the extra bounce. Edged to the keeper as India lose their third.

First ball of his second over and McCoy removes the second Indian opener as well! Lured into a drive and SKY takes the bait with minimal foot movement. Thick outside edge and it’s an easy take for the keeper.

…and the India captain is on his way back.Just the start the hosts would have wanted! Short ball, angled across. Rohit pokes half-heartedly and is taken aback by the extra bounce. Leading edge is gobbled by backward point with ease and India are one down already.

Right then, after all the delays, we’re all set for live action. Rohit and SKY walk out to open.

TOSS: WI opt to field first.2 changes for the hosts – Keemo Paul and Brooks are out.India have opted for an extra seamer so Avesh Khan comes in and Bishnoi unfortunately misses out.

A quick inspection of the pitch by the Head Coach and Captain before toss.
#WIvIND 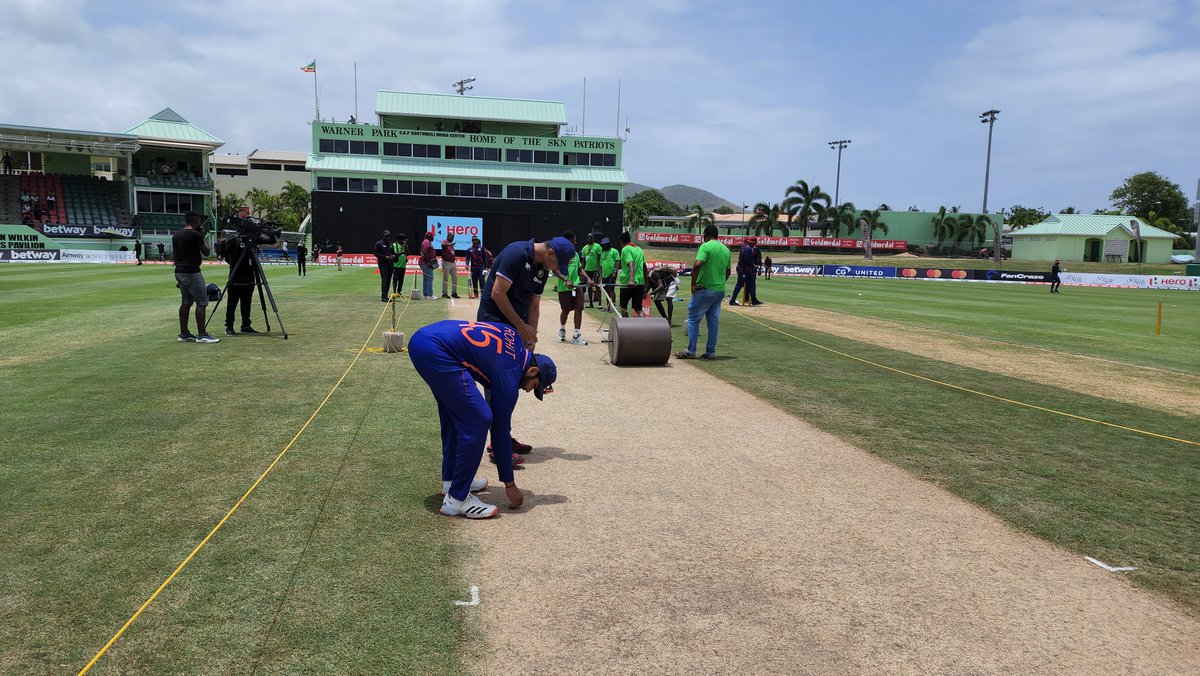 Update: We may not be starting at our rescheduled (10PM IST) time.

Starting at 11pm apparently. Still 20 overs a side. Shambles. #WIvsIND

India lead the series 1-0 but that is academic. Both teams are looking at the series as a major SRT – Situation Reaction Test for their players as they build towards the T20 WC. The batting approach of India has been well documented but this series might give a glimpse of how Rohit and Dravid plan to setup their bowling attack. On slow surfaces, the spinners will be jostling to make a mark as three of them (Ashwin, Jadeja and Bishnoi) did in the opening game.

West Indies meanwhile aren’t any close to finding their XI let alone know what their 15 might look like. We’ve had a delayed start to this game at St. Kitts because of logistical issues with regards to players’ baggage coming in from Trinidad.

But we’re not too far away from the toss now. Hold tight!