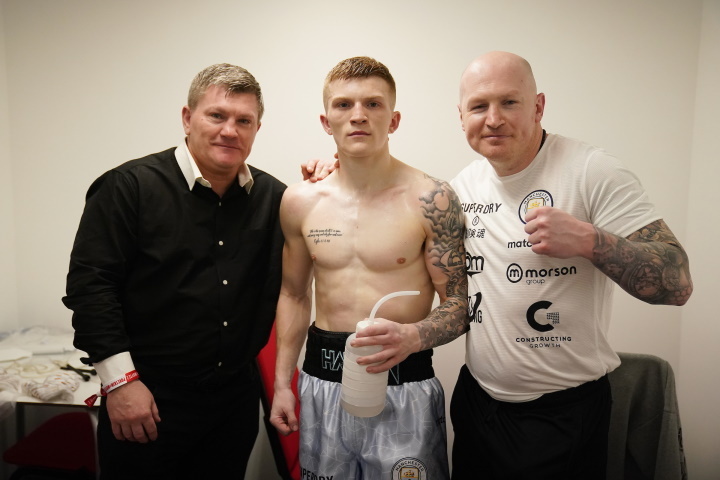 Campbell Hatton remained unbeaten but was taken the full six rounds by Michal Dufek, of the Czech Republic, on the Smith-O’Maison bill In Sheffield.

The 21-year-old son of former British legend Ricky, Hatton began well but after looking likely to overwhelm Dufek early on, the fight settled into a pattern as Dufek took few chances.

Dufek, 39, has won the majority of his 57 fights, but had lost every time he stepped up in class and first came to the UK nine years ago when he gave the then future WBO lightweight champion Terry Flanagan some rounds.

The fight was not even a minute old when Hatton landed a right uppercut and a left to the body that hurt Dufek, who was on the floor moments later although it was ruled a slip. But Hatton kept the pressure on and rocked Dufek with a left hook near the end of the round.

He kept the pressure up in the second, as Dufek mostly covered up. The one-sided action continued, but Hatton was often just hitting arms, and he was warned in the fourth for a low punch.

Price is a tall and rangy southpaw and he didn’t let Mejia near him, using the right jab as a measuring stick and then whipping lefts down the middle. Mejia did his best to duck low and get underneath the guard or inside, but when he did get close, Price was adept at tying him up.

In the seventh, Price upped the gears, but Mejia was able to stick with it. Referee Steve Gray scored it 80-72.

Kieron Conway boxed at super-middleweight on his way up to middleweight from super-welterweight as he got rid of some ring rust with a fifth-round stoppage of Gregory Trenol, of France, in the show-opener.

Conway drew with Ted Cheeseman for the British title in 2019 and dropped a split decision to Souleymane Cissokho in Texas last year. He is due to face Austin Williams on the Canelo-Golovkin bill next month in Las Vegas.

The dominated the action, softening up Trenol with the jab and creating openings for his right.

By the fifth round Trenol was holding on and as Conway opened up, he couldn’t miss. After a combination had Trenol staggering backwards, referee Steve Gray stepped in at 2:22 of round five.

Junaid Bostan moved to 2-0 and the 20-year-old produced his second stoppage as he got rid of Jose Clavero, of Spain, in the sixth of six rounds.

Bostan has fast hands and mixed his punches well, although his hands down style does leave him open at times, as in the second as he was clocked by a decent shot.

But Clavero had no answer to the solid pressure and variety that was coming his way, especially when Bostan used his feet to create good angles.

Credit that he was also not content to see out the rounds, as he pushed for a finish in the last round, dropping the exhausted Clavero with a left hook, referee Gray waving it off as he went down at 1:33.

The featherweight six-rounder between Nico Leivars and Spain’s Angel Gabriel Chavez ended in a technical draw 0:59 into the second round when a clash of heads

Leivars had dominated the first round, showing a sharp jab and some neat body punching and looked well on the way to a stoppage win when Chavez turned away from a head clash taking a knee. Blood poured out of the injury and after a trip to the ringside doctor, it was waved off. The referee was Howard Foster.

Aqib Fiaz, 22, extended his unbeaten record to nine fights with a 59-55 decision over Jordan Ellison from referee Foster at super-featherweight.

Fiaz was aggressive and loaded up on his shots, but tended to be caught at times on the way in. Still Fiaz kept the pressure on and looked like he might stop Ellison at the end of the fifth when he opened up. But Ellison saw out the difficult period and saw out the final round.

Ron Lewis is a senior writer for BoxingScene. He was Boxing Correspondent for The Times, where he worked from 2001-2019 – covering four Olympic Games and numerous world title fights across the globe. He has written about boxing for a wide variety of publications worldwide since the 1980s.