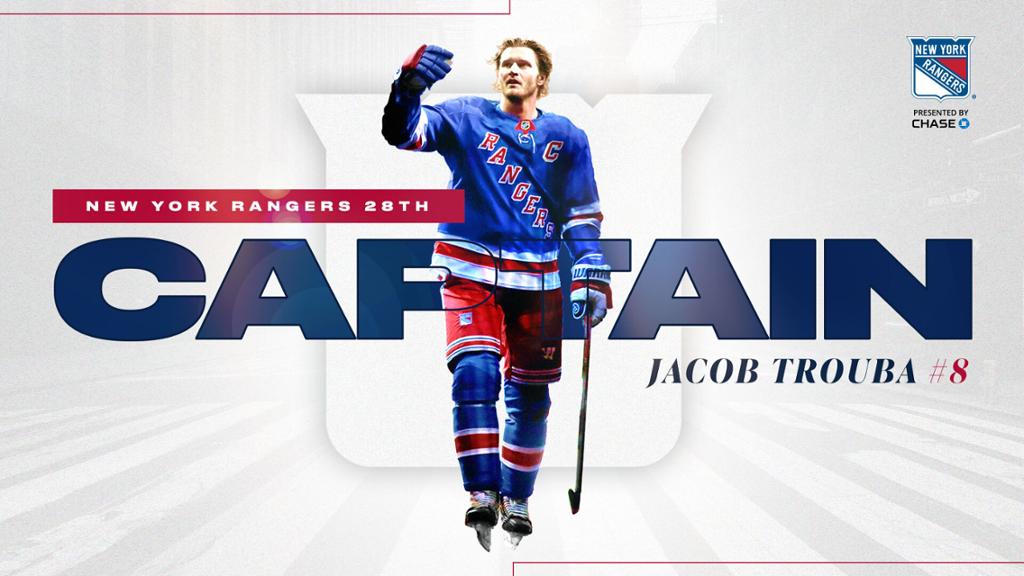 “Since he joined the Rangers, Jacob has consistently displayed all of the qualities we want in a leader on and off the ice,” Drury said. As we look to take the next step as an organization, he is a role model for all of our players to follow and the perfect choice to be our captain.”

“Right away when I got here, it was clear that Jacob had a certain presence in the locker room and among his teammates that exemplify what you need out of a captain,” said Rangers head coach Gerard Gallant. “With where our team is at and where we want to be, he is the right person to lead us there.”

Trouba, 28, will be the Rangers’ first captain since Ryan McDonagh (2014-15 – 2017-18) and becomes the 12th defenseman in team history to be named captain. The Rochester, Michigan native is the fourth straight American-born skater the Rangers have selected as captain. The Rangers are the first franchise in NHL history to have four consecutive full-time American-born captains (Trouba, McDonagh, Callahan, Drury). In addition, Trouba is one of three defensemen in the NHL to currently hold the captaincy for their respective teams, joining Minnesota’s Jared Spurgeon and Nashville’s Roman Josi.

A respected voice in the locker room, what Trouba does off the ice is equally remarkable to his performances on the ice. His enthusiastic support of the Garden of Dreams Foundation (GDF) and Junior Rangers Youth Hockey has generated a lasting impact with many tri-state area children. His passion for making a difference in youth communities is consistently displayed with his participation in hockey clinics, Make-a-Wishes, and visits to local hospitals.

Trouba, who was named one of the Rangers’ alternate captains prior to the start of the 2020-21 season, has skated in 597 career NHL games over nine seasons (2013-14 – 2021-22) with the Rangers and the Winnipeg Jets, registering 62 goals and 195 assists for 257 points, along with a plus-53 rating. He has averaged at least 21:00 of ice time per game in each of his nine NHL seasons, and he has posted a plus/minus rating of even or better, 90 or more hits and at least 100 blocked shots in eight of his nine seasons in the league.

Trouba was acquired by the Rangers from Winnipeg on June 17, 2019. The Jets originally selected Trouba in the first round, ninth overall, of the 2012 NHL Entry Draft.