Sulaiman Explains Why WBC Charges 3% Fees To Its Titlists: ‘Everything Goes Back To Boxing’ 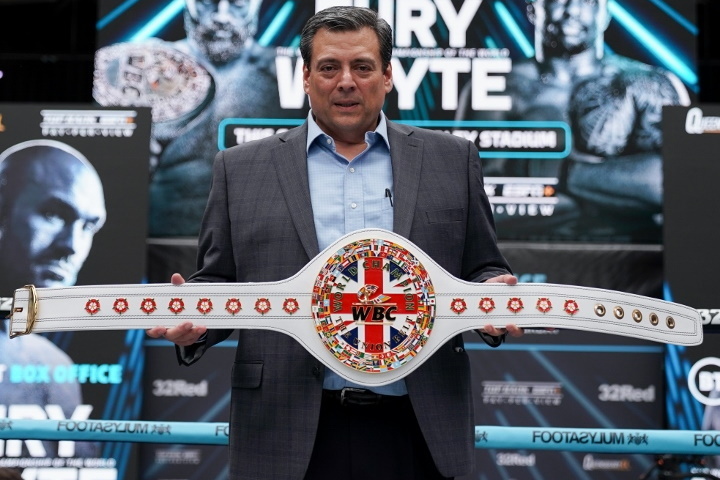 Mauricio Sulaiman is willing to send skeptics of his organization an accounting of its finances.

The head of the Mexico City-based World Boxing Council, one of the four major sanctioning bodies in boxing, was recently prompted to defend how his company conducts its business. The WBC was started by Sulaiman’s father José in 1963.

Specifically, Sulaiman was asked to consider remarks made by former two-division titlist and Hall of Famer Andre Ward. In an interview with Kate Abdo earlier this year, Ward expressed dissatisfaction with sanctioning bodies and questioned the fees they routinely levy on their beltholders. The WBC, for example, charges 3% any time one of its champions gets in the ring.

Sulaiman cited a slew of reasons why the WBC charges 3%, from overhead expenses to humanitarian work, to research, to developments in women’s boxing, etc.

“Well that’s how it [fee percentage] was originally structured 60 years ago, so I should ask 60 years ago [the people who came up with it],” Sulaiman said jokingly on The DAZN Boxing Show. “Maybe we should charge 5 or 10 percent.

“What we do everything goes back to boxing. From amateur boxing—we do a lot of things in amateurs. We do a lot of things in professional [boxing] in 175 countries. And we take care of our own. We take care of the elderly fighters that are going through difficult times, they have no more money. They either spent it all or make very little. But anyone in the industry can access the WBC for humanitarian aid.

“As I said we have so many committees. We are funding research for women’s boxing and we are all over the place with everything and that costs money. We have six employees in Mexico City. We have to pay rent, we have to pay administration, and the committees and the research.”

Sulaiman added that he would be more than willing to send “proof” to those who harbor suspicion about the WBC’s financial dealings. Sulaiman listed a few more important initiatives he says the WBC has spearheaded in boxing, such as its efforts in anti-doping protocol.

“Anyone that wants to see what we do with the money they are welcome to see and we will send them all the proof,” Sulaiman said. “WBC is the one that brought [fights from] 15 [rounds] to 12 rounds, [implemented] day-before weigh in, the four ropes in the ring, the changes to the gloves, the anti-doping.

“We spend a lot of money on anti-doping in the Clean Boxing Program. We have a weight management program. We have countless amount of social responsibility programs and that’s where the money goes. It is done on behalf of every single fighter who ever fought for the WBC.”

Sulaiman understands that some critics will never be satisfied with sanctioning bodies so long as they are reaping a financial benefit.

“Whenever there is money [involved], an organization is going to be bad,” Sulaiman said.” But we just live with it. I can only speak for the WBC.”