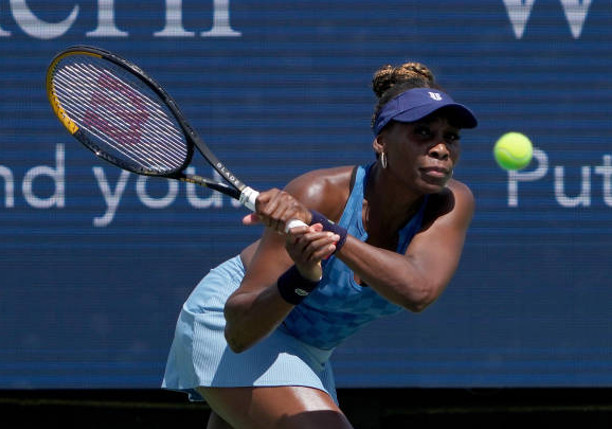 
Karolina Pliskova powered through 11 of the last 13 games defeating Venus Williams 7-5, 6-1 in what may have been the 41-year-old superstar’s Cincinnati farewell.

Pliskova powered through 11 of the last 13 games defeating Venus Williams 7-5, 6-1 in what may well have been the 41-year-old superstar’s final Cincinnati singles match.


Up and running in Cincy 👉

Former champion 🇨🇿 @KaPliskova secures a spot in the second round with a 7-5, 6-1 win over Venus Williams.#CincyTennis pic.twitter.com/DoiH8EUmgJ

Unlike sister Serena, who announced her plan to retire after the US Open, Venus Williams has not made a definitive statement about her playing future. Twenty-three-time Grand Slam champion Serena Williams is set to face reigning US Open champion Emma Raducanu tonight.

If you’ve watched even a glimpse of Venus’ glorious career, then you know her 49 singles championships and 777 career victories are a testament to her staying power. At times today, the four-time Olympic gold medal champion summoned stretches of vintage Venus play, however sustaining that level proved challenging.

Williams was hitting her groundstrokes nearly seven miles-an-hour faster in the first set, slammed a few serves over 115 mph and slashed some forehand strikes down the line capping a demanding 20-point game to break for a 3-2 lead.

Credit Pliskova, who was empowered by her run to the Toronto semifinals last week, for picking up her play and hammering decisive serves at crunch time. Pliskova pumped eight aces and saved five of six break points today.

The seven-time Grand Slam champion clearly still loves to compete and for a set today she stayed in step with the 2021 Wimbledon finalist.

Playing for her first win of the year and first Top 20 victory in three years, Williams came out belting the ball with ambition and accuracy.

An eight-deuce game escalated as Pliskova  repeatedly challenged Williams’ forehand. The 41-year-old Williams exploited a double fault and lashed a clean forehand down the line ending a 20-point game to break for 3-2.

Venus brought the heat to back up the break, banging a 114 mph ace and blasting a 119 mph body serve holding in the sixth game.

When Williams netted a flat forehand, Pliskova broke back to even after eight games. The three-time semifinalist saved a pair of break points holding for 5-4.

Wild card Williams saved a pair of set points to even it up after 10 games.

Pliskova kept pounding away and elicited a backhand into the bottom of the net breaking at 15 to collect a one-set lead. Pliskova saved four of five break points in the opening set that saw Williams hit one more winner (13 to 12).

Winning that opening set helped loosen the Czech’s right arm. Pliskova broke in Williams first serve game of the second set charging out to a 3-0 lead. The former No. 1 won the final three games to secure her second-round spot.

It was a tough day for Grand Slam champions.

World No. 44 Zhang Shuai broke in Naomi Osaka’s first and last service games surging to a 6-4, 7-5 victory over the four-time major champion.

In an all-American clash, Shelby Rogers shredded Sofia Kenin 6-2, 6-1. Rogers, the pride of Charleston, South Carolina, will take on compatriot Amanda Anisimova next.