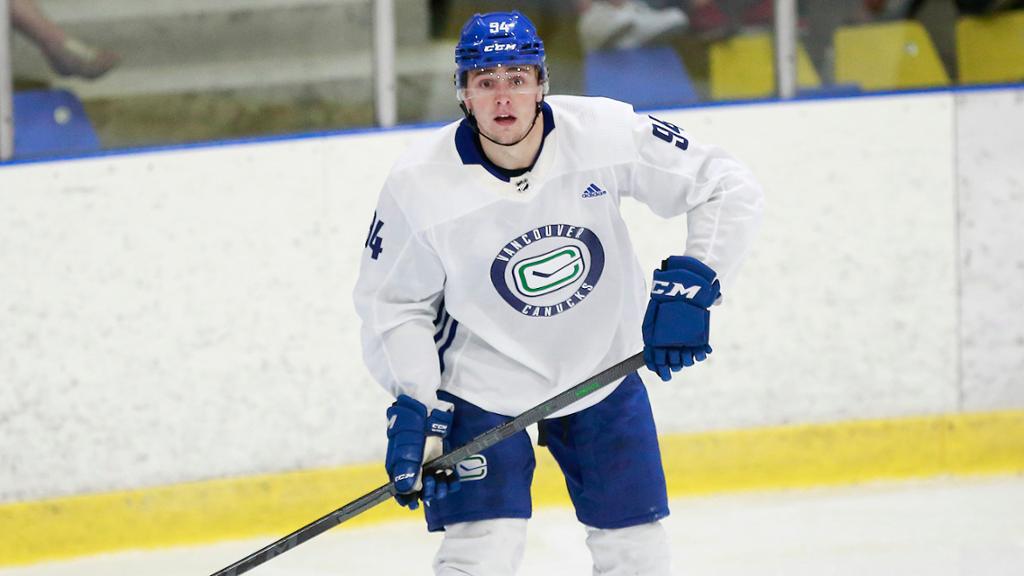 “I scored some goals so of course I got some confidence, and I will try to bring it over,” Karlsson said during Canucks development camp, which was held July 10-15. It ended with him scoring two goals in a final-day scrimmage. “I will score goals and take the puck to the net, but it’s going to be hard. I will work on it every day and look at videos to improve my game and we’ll see, hopefully I score some goals over here too.”

Karlsson is used to things being hard since he was drafted by the San Jose Sharks in the third round (No. 87) of the 2018 NHL Draft, then was traded to the Canucks on Feb. 25, 2019, for forward Jonathan Dahlen.

A switch from center to wing in 2020-21 played a role in Karlsson’s 51 points (20 goals, 31 assists) in 52 games with Karlskoga in Allsvenskan, Sweden’s second division, and his move to the SHL last season.

“It hasn’t been easy at all,” Karlsson said. “It’s been a tough way, but I’m proud of that way and I have still a bit to go. I want to play in the NHL so I’m going to work on the same things I’ve done up to now and try to do everything better.”

Karlsson is expected to start the season with Abbotsford of the American Hockey League, but the Canucks believe his strength around the net and willingness to go to those areas and battle for loose pucks should translate well to the smaller ice surface in North America, while also limiting some of the exposure created by questions about his skating.

“His skating has improved, and for some guys on the big ice vs. small ice, I think actually he will be better,” general manager Patrik Allvin said. “As a 22-year-old you are much more mature. And with his experience of playing pro hockey in Sweden last year, I definitely think he understands what his strengths and weaknesses are and how to be successful in this League.”

Allvin noted there will be spots at forward open with the Canucks. If Karlsson can adjust quickly and bring last season’s form, it’s not hard to envision him playing NHL games this season.

“He does some things in traffic that not a lot can,” Canucks assistant to the GM Ryan Johnson said. “He’s not afraid of the hard areas, and the way he can get the puck off his stick, he’s an exciting player for us. When he gets around better players it only elevates his game. He can find those areas, and when people get him the puck it’s usually in the back of the net.”