England vs South Africa LIVE: Cricket score from day three of first Test at Lord’s as Zak Crawley out early in second innings 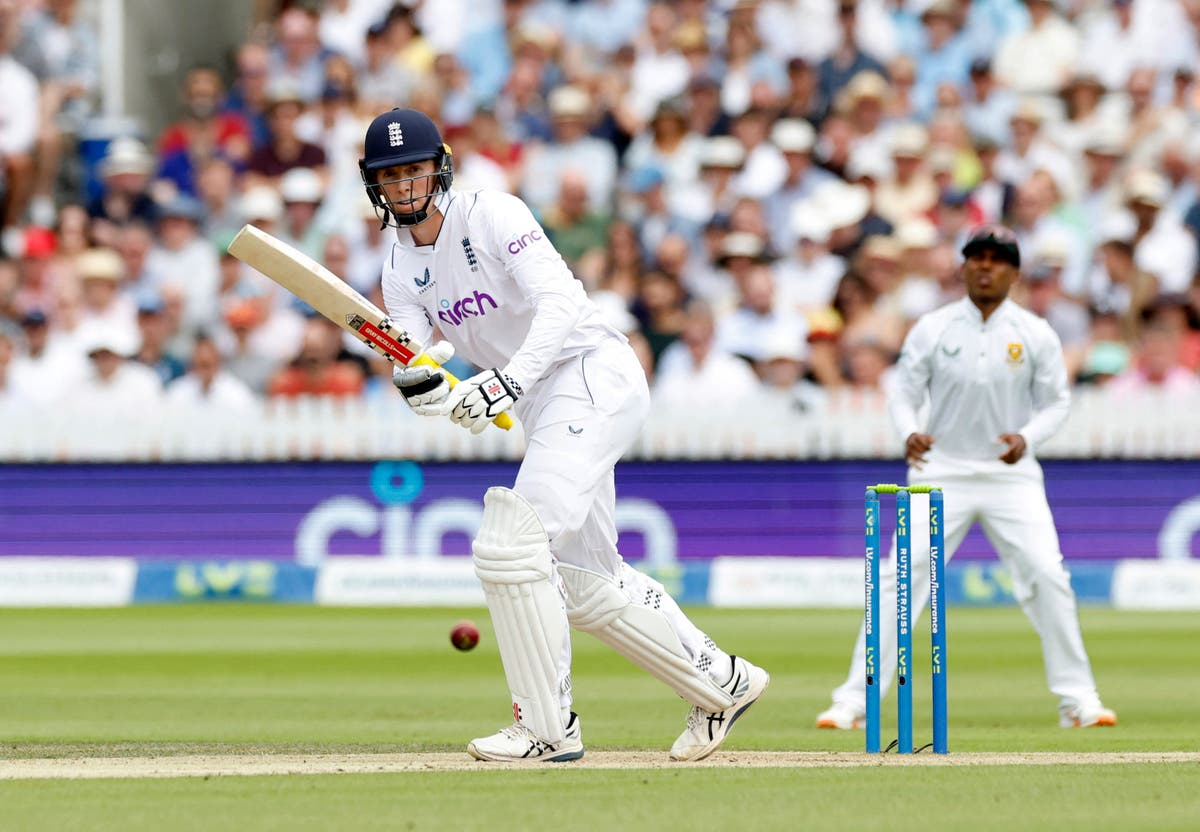 England had lost every session of this Test match convincingly up to tea on day two and were meandering towards an enormous first innings deficit, when the unlikely duo of Ben Stokes and Jack Leach – where have we heard that before? – conjured a spell of fierce bounce and genuine spin to disrupt South Africa’s momentum.

The tourists still held a commanding 124-run lead after reaching stumps on 289-7, boosted by a late flurry of runs from bowlers Keshav Maharaj and Marco Jansen, having toppled their hosts earlier in the day for only 165 led by Kagiso Rabada’s five-wicket haul.

Yet as the sun began to dip behind the Main Stand, the home supporters would have left a humming Lord’s with some small cheer having watched their captain lead the kind of fightback that has become a familiar part of England’s weird and wonderful summer and they will look to build on that on day three.

Follow the latest score and over-by-over updates from the first Test below.

9th over: Rabada continuing. He bowls one down the leg side that Pope tries to shape away, can’t make contact but it flies past the keeper for FOUR byes.

Nicely played short ball for two, followed by a single for Pope before Lees pushes the ball down the ground. Doesn’t quite reach the boundary, so they run three.

8th over: So Crawley’s struggles continue. The calls for Harry Brook to come into the team for him will only grow louder. Ollie Pope is the next man in and he works a single to deep mid-wicket to get off the mark.

8th over: A change of bowling and it’s the left-arm spinner Keshav Maharaj getting a run just before lunch.

Crawley on to the front foot and nudges the ball to leg for two but then a WICKET! Really not good – Crawley tries a sweep, misses it and it hits him plumb in front for lbw. Doesn’t even bother reviewing, which tells you all you need to know

7th over: Nice shot by Lees as he waits for one and drives it into the off-side for two. Then fends a shorter Rabada delivery away before having a flash at the final delivery but through to the keeper with no contact.

6th over: I’m going to suggest that Crawley will happily keep seeing South Africa bowl straight to him, given his problems nicking drives. He chips a leg-stump half-volley into the leg-side for two, although he was a bit early on it and it was a sort of leading edge. Closed the bat face too early by the looks of things.

He thinks about going at one outside the off stump but elects to leave it late – the correct decision. No damage done.

5th over: Crawley squirts a Rabada delivery into the off-side for two and then swishes one off his pads to wide fine leg for another single. That’s bread and butter for the Kent man, he’s great when the bowler drifts to leg.

Lees thinks about playing a short ball and sort of half-fends at it but it goes through to the keeper. Will give him the benefit of the doubt and say it was a last-minute leave but it might have been a play-and miss

4th over: Ngidi bowling some nice stuff here, getting the ball nipping around and looking dangerous. An easy single for Crawley and Lees then digs in to see out the rest of the over.

3rd over: Nicely flicked off the pads for a single for Crawley and Lees then gloriously pushes the ball through the covers off his back foot for FOUR! Great timing.

Then DROPPED! Lees edges one where Petersen (at third slip) dives in front of second slip, gets a right hand to it but can’t hold it. It looked like second slip could have caught that about waist high. Let-off for England and they run one. Crawley then adds another single

2nd over: Great start from Lungi Ngidi as he’s nipping the ball around and Crawley gets one possibly in the box off an inside edge, a dangerous leave and a half-appeal after being hit on the pads.

He then nurdles one round the corner to leg and they race a really quick two. A couple more solid defensive strokes to finish the over and the final ball actually sees them run a quick single from the off-side block.

1st over: Here we go. Alex Lees on strike with Zak Crawley at the other end. Kagiso Rabada bowling the first over.

Lees leaves a couple, pushes a couple to the infield and no runs but no damage done.