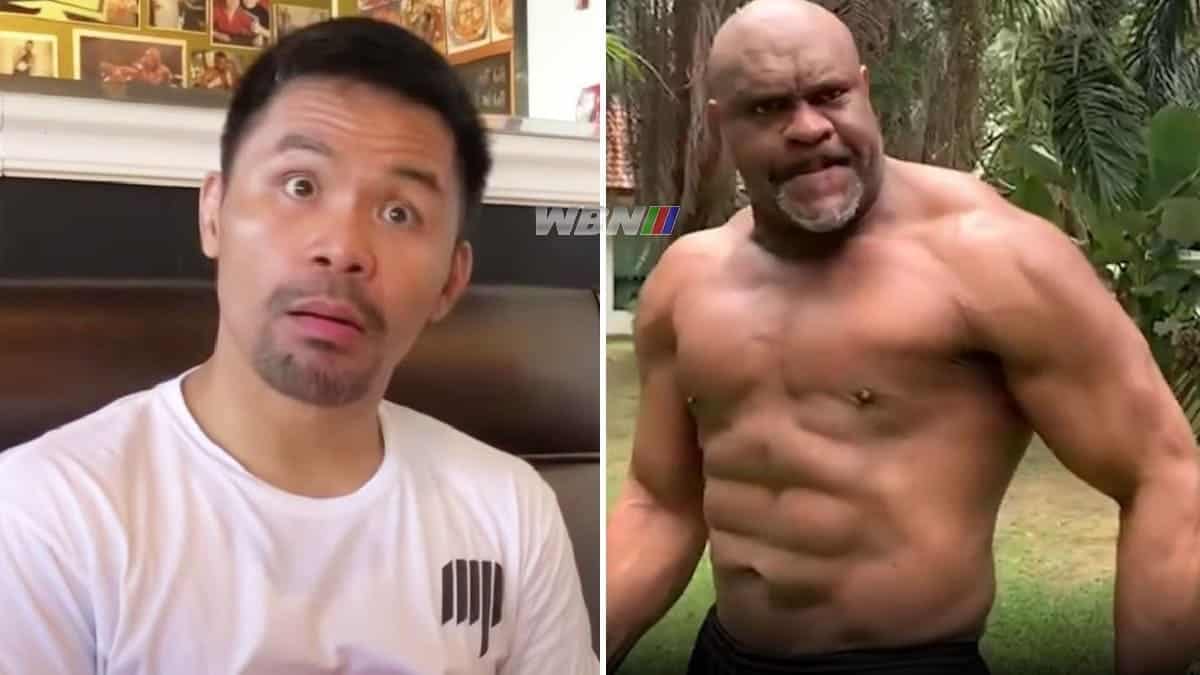 Eight-weight boxing legend Manny Pacquiao was labeled “a mosquito” in a challenge by former MMA legend “The Beast” Bob Sapp.

Ahead of his first exhibition in December against combat YouTuber DK Yoo, Pacquiao already has a second offer.

Savvy businessman Luis Singson is drumming up Filipino interest in a fight that would be similar to when Rocky Balboa faced Thunderlips in Rocky III.

Pacquiao weighs around 160 pounds these days, even when soaking wet. On the other hand, Sapp weighs over double what the “Pacman” scales.

Sapp stands six foot four inches tall and fully lives up to his “Beast” name. In a bid to capitalize on recent returning fight veterans, Sapp met with Singson at the EDSA Shangri-La to make a video.

In it, he called for Pacquiao to sign for a stunning exhibition that would be off the charts in The Philippines. Singson also knows it would send shockwaves around the boxing and MMA worlds if Pacquiao, who began his career at 105 pounds, agreed on a fight with the mammoth Sapp.

“Manny, accept this fight. I’ll treat you like a mosquito,” said Sapp, as covered by abs-cbn.com. “I’m definitely ready to fight.

“I’m in shape too because Manny, I understand, he’s buzzing around [all the time in the ring].

“He may have a shot at me just like keeping a gun right here and shooting at me. But I’m a tank; it’s just going to bounce off.”

Singson knows full well that the fight is a pie-in-the-sky affair and has a slim-to-no-chance of happening. But that didn’t stop him from calling on Manny Pacquiao to give him a definitive answer.

“It is possible that it will go ahead if he accepts himself,” said Singson on Pacquiao vs Sapp. “This is where Manny will make a lot of money because he’s old.

“He’s going to make him tired!”

The former Ilocos Sur Governor and current Narvacan mayor continued:  “I will talk to Manny. I think Bob is the best fight for him.

“This is the only place where he will earn a lot. They say that the fighting in the exhibitions where he makes money.

Does Manny Pacquiao have a chance?

“He has a [chance in the] fight because he [Sapp] is also old. He is 48 years old, but it’s very dangerous, yes. That’s the thing that people want to watch.

“Manny has hope because of the speed. He will tire him out. But it’s a dangerous fight. Bob is a killer too.

“Nothing is sure yet, but I’ll talk to Manny,” he concluded.