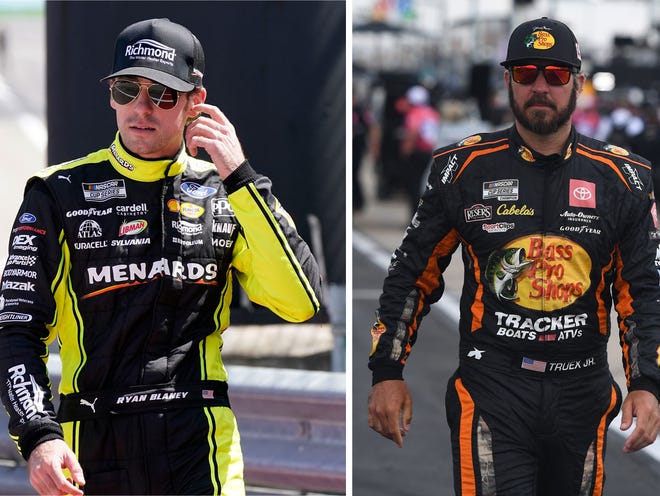 Next week’s Coke Zero Sugar 400 at Daytona will be a wild affair. That’s a given, regardless of any outside factors adding to the go-for-broke personality of any race at NASCAR’s home track.

Among the outside factors, there’s Sunday’s race at Watkins Glen, the 25th race in the 26-race regular season leading to the playoffs. Depending on who winds up in the Glen’s Victory Lane, next Saturday night’s Daytona showdown might see the emotions ramped way up, if you can imagine that.

Let’s get to some of those other outside factors . . .

CHASING EARNHARDT:The Intimidator is next up for Kevin Harvick on the all-time wins list.

In 2014, NASCAR increased its playoff pool to 16 drivers and teams. Playoff eligibility was somewhat easy, at least on paper: Win and you’re in.

Win a regular-season race, and your playoff ticket was punched.

Until this year, that was a given. The only hitch was the possibility — as improbable as it always seemed — of more than 16 racers winning a race during the regular season. In the eight seasons since the playoffs expanded to 16, there’s never been more than 13 regular-season winners.

With two races left this year, there are 15. Potentially, at least, that’s what we call a big fat factor. Why?

If a playoff-eligible driver, previously winless in 2022, wins Sunday at Watkins Glen, the playoff field is locked up with 16 winners. Unless . . .

The field would be locked up unless another playoff-eligible driver, winless up to now, wins at Daytona next week. That would run the total to 17 winners, with only 16 available seats at the playoff table.

That would likely be Kurt Busch, who has been sidelined for a month with concussion symptoms. Kurt has a playoff spot awaiting him, assuming he’s ready when the playoffs start and, of course, assuming we don’t get to 17 different winners.

Blaney enters Watkins Glen with a 26-point lead over Truex, but when you consider how quickly a driver can “earn” a 35th-place finish, especially if caught up in an early Big One at Daytona, Blaney can’t rely on running out the clock on Truex.

If we get to 16 winners after the Glen, logic and math tell us a 17th is possible at Daytona, where restrictive-horsepower rules have bunched racers together since they were instituted in 1988.

No racer is a Have Not at Daytona.

So guess what, some of the one-race winners from 2022, previously assuming they were in the playoffs, will be driving for their championship hopes on the high-banked, high-intensity, 31-degree-banked superspeedway.

Austin Cindric, Tyler Reddick, Chase Briscoe, and Kurt Busch, if he’s back, will have to “get up on that wheel,” as Barney Hall would say, and race harder than they might want to race at Daytona.

A playoff ticket slipped above the overhead visor would allow a driver to avoid certain risks, especially in those chaotic closing laps, that he now can’t avoid if he wants to race for championship glory.

Before moving on, what do we mean by “playoff-eligible” drivers? By today’s standards, that basically means a full-time Cup Series driver.

In previous years, when a racer might race full-time in Cup and part-time (or more) in the Xfinity Series — or vice versa — he’d have to declare the series where he’d be racing for points and a potential championship.

That rule was designed, by and large, to keep moonlighting Cup drivers from running Xfinity races and taking points away from that circuit’s regulars.

With that in mind, let’s look at the eligible racers, currently winless, who could further gum up the works over these next two weekends — other than the obvious in Blaney and Truex.

Chris Buescher: In four previous road-course races this year, he’s had three top-10s, including a runner-up at Sonoma. He once won an Xfinity Series race at Mid-Ohio.

Michael McDowell: He has an extensive road-course background and enjoys that particular discipline. Unfortunately, his Watkins Glen record is rather uninspiring: In 12 Watkins Glen starts, he’s had no top-10s and finished worse than 20th seven times.

Erik Jones: He had back-to-back top-fives at the Glen in 2018-19, but of course that was in Joe Gibbs Racing equipment. He currently drives for Petty GMS.

And after that, who could break through at Daytona?

Well, just about anybody, given the nature of those races. But topping that list of potentials would be Bubba Wallace, who has shown an affinity for racing up front at Daytona and sister track Talladega (where he won last year).

McDowell could also be a factor at Daytona, where he’s won once and contended often.

Ricky Stenhouse, Ty Dillon and, frankly, just about anyone willing to keep the pedal bolted to the floorboard and his elbows flared will go to Daytona with a playoff spot potentially on the line.

Don’t forget Corey LaJoie, another Daytona/Talladega threat. Problem is, he currently sits 31st in points and rules say a driver must be in the top 30 to be playoff-eligible.

Great, yet another possible wrinkle to worry about!

Whatever, it could be very interesting, and it will definitely be chaotic.