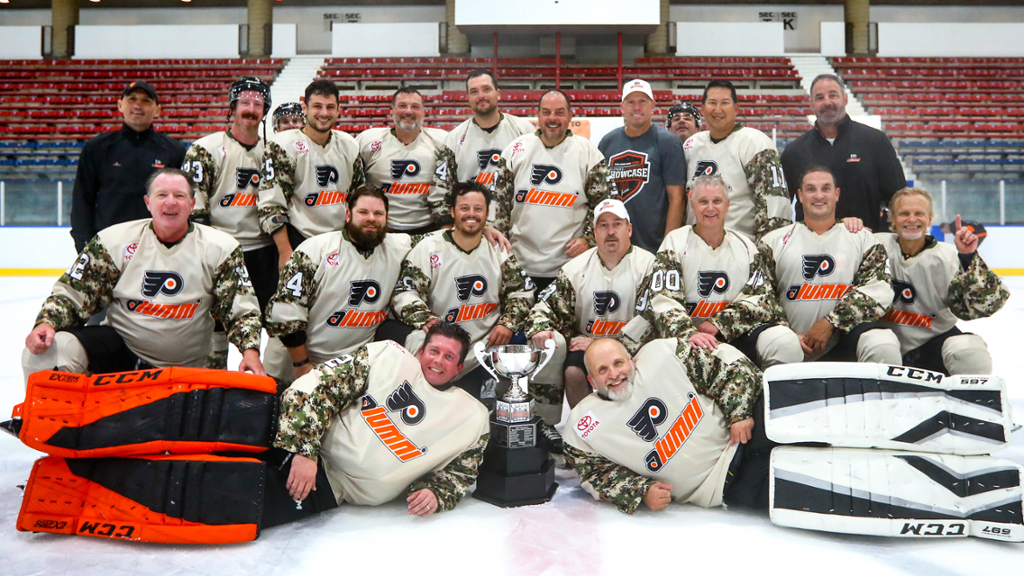 The eighth edition of the annual Flyers Alumni Fantasy Camp got underway on Friday at the Class of 1923 Arena at the University of Pennsylvania and continues through the championship and consolation games on Aug. 22.

One of the signature events on the Flyers Alumni Association’s calendar, the camp brings together 64 players from a wide array of hockey and personal backgrounds, with widely varying levels of age and previous hockey experience. While a large percentage of participants have been locally based (or at least originally hailing from the Delaware Valley), registrants come from across North America.

“There are a lot of regulars who come every year,” said Bob “the Hound” Kelly. “but we also have new participants every year. They come back for the fun, obviously, and for the friendships with the other players and the coaches. Every year, we try to improve on the year before.”

For the eighth straight year, all 64 registration slots are sold out. Originally held in Atlantic City, the venue was relocated a few years ago to the University City area with games at the Class of 1923 Arena on the campus of the University of Pennsylvania. Campers will stay at the Study Hotel in University City.

Last year, one of the off-ice highlights of camp was a catered barbecue at Marsh’s house after the second game of camp. Following the meal, everyone retired inside to watch a special screening of HBO’s “Broad Street Bullies” documentary, along with many of the original Bullies themselves — including the likes of Barber, Joe Watson, Dave “the Hammer” Schultz, Orest Kindrachuk and Lou Nolan as well as Flyers Alumni of latter team generations such as Poulin, John LeClair and others.

This year, after the first round of games, there will be a party suite outing to Citizens Bank Park to watch the Phillies take on the New York Mets. As with every year’s camp, there’s an opening reception on the first night and a celebration party on the third night on the eve of the championship and consolation games.

Apart from having fun on and off the ice, the Flyers Alumni Fantasy Camp serves an important fundraising role for the Flyers Alumni Association’s charitable programs such as Every Child Deserves a Bike and the 12 Days of Christmas.

“The Fantasy Camp is a big help in raising money toward the ‘Every Child Deserves a Bike’ program in particular. A single adaptive bicycle, depending on the specifications, can cost upwards of $5,000. Making the bikes available to kids who can benefit from them is exactly why we created the program. We work with Help Hope Live to identify recipients. We then have the adaptive bikes built for special needs children and personally deliver the bikes to the recipients. Without events like Fantasy Camp and the Alumni Golf Invitational — and without the loyal support of Flyers fans — this would not be possible,” said Marsh.