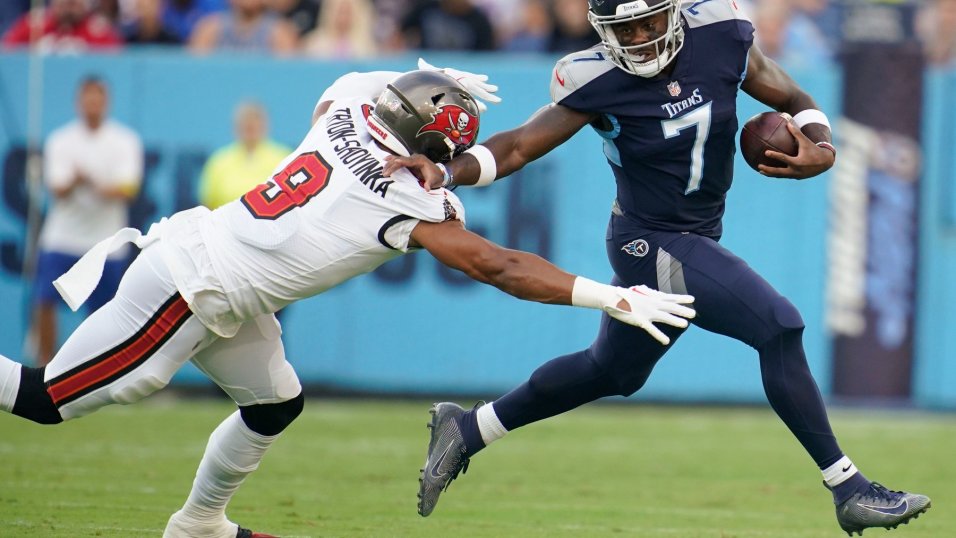 The Tennessee Titans got their first win of the 2022 NFL preseason by beating the Tampa Bay Buccaneers 13-3 in Nissan Stadium on Saturday night.

Editor’s note: All grades in this article are subject to review. All PFF player grades will be finalized by 12 pm ET tomorrow.

•  Malik Willis threw the first touchdown of his NFL career Saturday night, finding Chigoziem Okonkwo with a 6-yard dart at the end of the second quarter.

• Willis completed 11-of-17 pass attempts for 80 yards and a touchdown. He threw the ball 11.4 yards down the field on average and didn’t record a single turnover-worthy play.

•  Hassan Haskins led the way in carries for Tennessee tonight. He put up 39 rushing yards, with 36 coming after contact. He forced three missed tackles and recorded one run of 10 or more yards.

• First-round rookie Treylon Burks led the Titans’ receiving corps in routes run (19). He brought in just one of his three targets for four yards — a catch contested by a defender at the catch point.

• On first review, it wasn’t a great night for the Titans offensive line. In total, the line allowed one sack, two hits and 11 hurries from 38 passing plays, giving up pressure on 36.8% of their snaps.

• Undrafted free agent David Anenih was the pass-rushing standout on Saturday, racking up three pressures — including one sack — from 17 pass-rush snaps.

• Joe Jones and Chance Campbell held their own in coverage tonight. Combined, they allowed six receptions from seven targets, but those catches went for just 6.0 yards on average. Both players recorded a defensive stop, and Jones snagged an interception.

• It was a rough day for Shakur Brown, who allowed five catches from six targets for 67 yards and three first downs on first review. Three of those receptions went for 15 or more yards and passes into his primary coverage netted a 118.8 passer rating.

• Kyle Trask led the charge at quarterback for the Bucs, completing 11-of-24 targets for 105 yards and one interception. He tallied three big-time throws and threw the ball 12.3 yards down the field on average.

• Ke’Shawn Vaughn led the Bucs’ running back group in carries, with 10. He ran for 54 yards and three first downs, averaging 3.2 yards after contact per attempt and forcing four missed tackles.

• Rookie Deven Thompkins will likely end reviews as the Bucs’ highest-graded pass-catcher. He caught his two targets for 38 yards and two first downs. He went 1-for-1 in contested scenarios and hauled in one explosive play of 15 or more yards.

• The Tampa Bay offensive line was credited with four sacks on the night, but they only gave up nine pressures from 33 snaps.

• Interior defender Willington Previlon made the most of his 15 pass-rush snaps tonight, producing two hits, two hurries and a 33.3% pass-rush win rate.

• Olakunle Fatukasi produced five solo tackles, two defensive stops against the run, two sacks as a blitzed and allowed just one catch in coverage for -1 yard.

• Jamel Dean and Sean Murphy-Bunting played 10 coverage snaps apiece tonight. They both gave up a catch and gave up 25 yards in total.