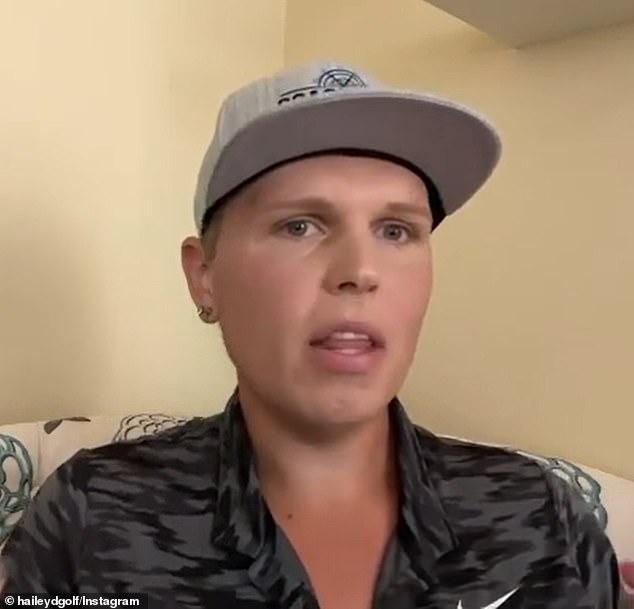 A golfer who is bidding to become the first transgender woman to earn a Ladies Professional Golf Association (LPGA) tour card has sparked outrage online.

Hailey Davidson, 29, had a strong finish in the first two rounds of the first stage of the LPGA and Epson Tour Qualifying School in Palm Springs this week.

But after DailyMail.com and other outlets reported on her efforts Friday, many questioned whether Davidson’s inclusion was fair.

That is because athletes who undergo male puberty before transitioning are widely-believed to retain strength advantages – including how far they can hit a golf ball.

‘Not fair at all. Protect women’s sport. Listen to the facts, the scientists and the medics. This is wrong,’ she tweeted.

Murray was one of a number of users on social media commenting on the fact may well earn her PGA tour card.

According to the LPGA’s rules, any player who shoots under 88 after all three rounds will earn a 2023 Epson Tour Status, the official qualifying tour for the LPGA.

Davidson, a Scotland native who lives in Florida, shot a 70 in the first round at the Shadow Ridge Golf Club in Palm Desert California, on Thursday, and hit a 76 during the second round on Friday, Fox News reported.

The score saw her beat much of her competition in the first two qualifying rounds.

LPGA has allowed trans athletes for over a decade, as long as they have undergone hormone treatment and gender reassignment surgery – as Davidson has.

Hailey Davidson, 29, is on her way to becoming the first transgender woman to earn an LPGA tour card after successful showings in the first two days of Stage I qualifiers

The mother of tennis star Andy Murray, Judy Murray, said that Davidson’s position was completely unfair on other biological women 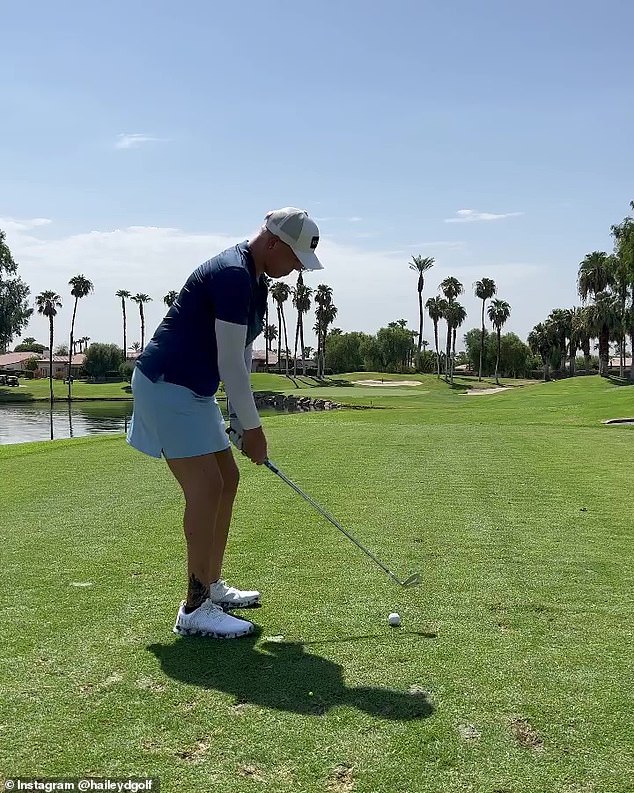 ‘I’m determined to get a hole-in-one on camera one day!’ Hailey Davidson, 29, wrote on Instagram as she posted video of herself practicing on the links

‘If it’s not one ‘breaking through’ it’s another one. This time a Hailey Davidson. Truly @LPGA time to revisit your ‘rules’ and re-set following those from other major sport federations. Women deserve a fair playing field. Male bodies remain male bodies with built in advantages,’ wrote Dorothy van Koolwijk.

‘This idea that because trans women have advantages, it must be unfair, that’s simply not true,’ said Joanna Harper. @golfweek @GolfweekNichols , pls speak to expert scientists on this issue who AREN’T trans activists,’ wrote Jennifer Gingrich who describes herself as a radical feminist.

‘Why have a separate category in #golf called ‘ladies’ if anyone is allowed to self-identify into it? Instantly, it becomes a bogus ‘lesser men’ extension of the #PGA. How could @LPGA #LPGA undermine itself in this most ridiculous way? Tossing out legitimacy of the league?’ wrote Linda Blade.

‘I am an expert in muscle. It is absolutely unfair. When you add in stronger tendons, ligaments, bones. Longer limbs, wider shoulders, narrow hips. All real advantages,’ argued another Twitter user.

‘There was a time, in global sports, certain born women athletes were harassed to prove their feminity (sic) through hormone tests and all nonsense. Some of them were ripped off their medals. Today they are openly letting born males to compete & snatch the victories from women. Insane,’ added Mohammed Riyaz. 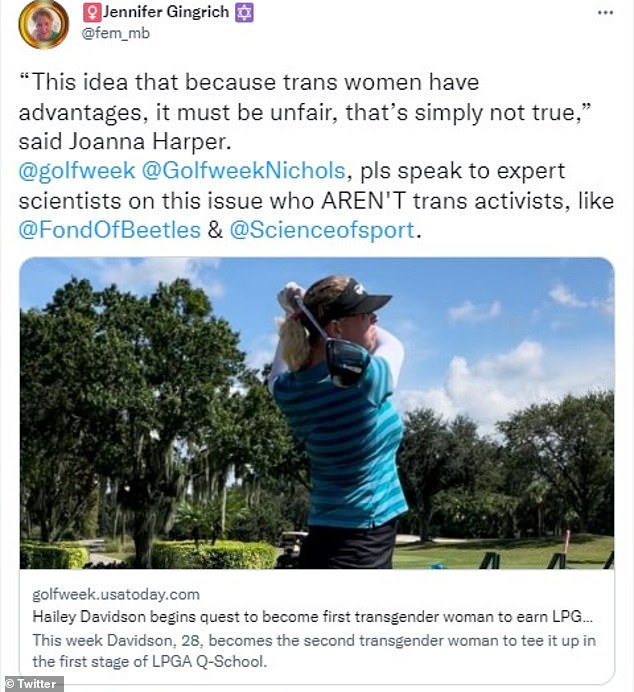 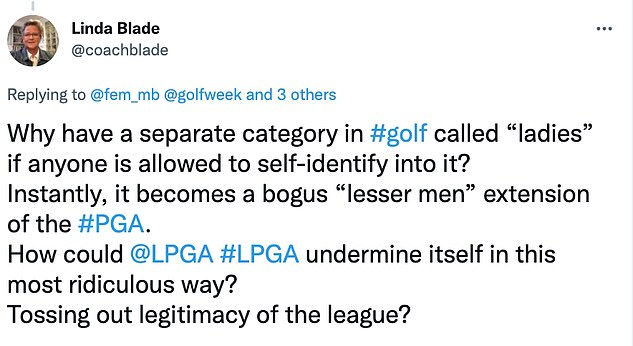 Davidson would be the second transgender woman reach the first stage of LPGA Q-School.

In 2013, Bobbi Lancaster, a 63-year-old physician from Arizona earned Symetra Tour status in 2013, but decided to spend her time traveling the country as a human rights advocate according to Golf Week.

This time, Davidson, competing against 310 other women, is tied at 59th place and appears to be in a good position to pass the first stage and move onto Stage II in October against the top 100 players.

The LPGA Tour had removed its ‘female at birth’ requirement back in 2010.

Davidson told Golf Week that the ‘trans issue’ is also a source of angst for her as well.

‘I guess that’s what frustrates me the most. If I play bad, then people will feel justified – “Oh well, she played bad and wasn’t good enough.” – If I do anything good, it won’t be because of the fact that I put my whole life into this … it would be because I’m trans.

‘I want to make sure everything I do is positive to the point that there’s nothing negative people can say,’ she said. ‘I’m not standing up on the first tee saying “Oh, I’m Hailey. I’m the trans girl.” If it comes up, it comes up.’

World Golf Hall of Famer Laura Davies argues that is Davidson meets the requirements of the LPGA’s Gender Policy then she should be allowed to compete.

‘If she starts going really well, then questions will be asked and that’s not fair because if permission has been given, then game on. But I can see what’s coming if it turns out that she’s an absolute world-beater.’

Davidson last competed as a male golfer in 2015, after which, she began hormone therapy treatments and underwent gender reassignment surgery in 2021.

‘I know I have what it takes from being around professional golfers on the LPGA/PGA/Champions Tour over the recent years and staying very competitive with them all,’ Davidson said in 2021 while trying to fundraise for qualifying school.

‘While I know that I have the talent and mental game to make a career out of playing, the initial cost of tournaments and practice expenses is what truly holds me back.’ 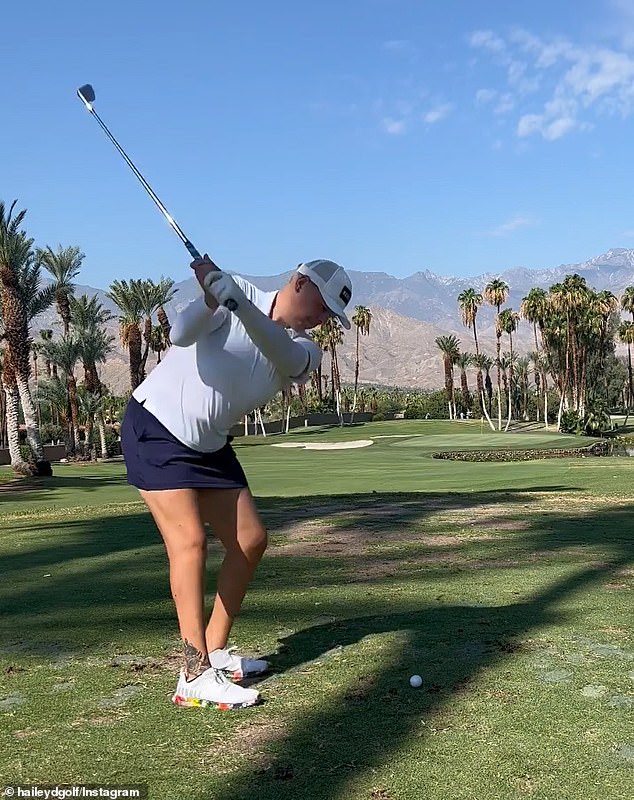 Davidson, pictured practicing before the tournament began, shot a 70 in the first round at the Shadow Ridge Golf Club in Palm Desert California, on Thursday, and hit a 76 during the second round on Friday. The third round will be held over the weekend 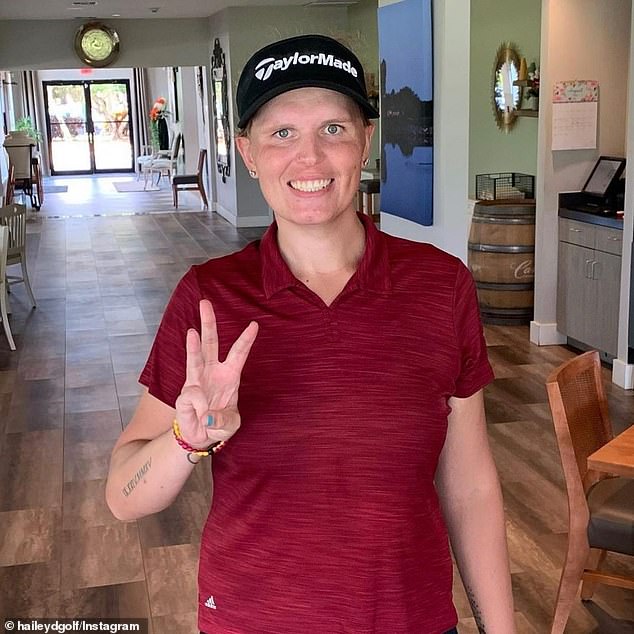 According to the LPGA’s rules, any player who shoots under 88 after all three rounds will earn a 2023 Epson Tour Status, the official qualifying tour for the LPGA, a goal Davidson has been working towards after completing her transition in 2021

The majority of Davidson’s time has been spent competing on the East Coast Women’s Pro Golf Tour, winning three of the last five matches before the summer qualifiers.

Although the top male golfers can typically hit the ball further than their female counterparts, Davidson claims that the majority of criticism about her competing in the women’s circuit is transphobic rather than a real dialogue over the sport.

Davidson said that after her transition, she now hits the ball 15 mph slower.

‘I’ve seen that it’s not about protecting women’s sports or me having an advantage, it’s just that you don’t like trans people,’ Davidson said of her detractors while speaking on the Like It Is podcast.

‘It’s very sad that that’s what it comes down to. In the last couple of months, that’s what I’ve come to learn.’ 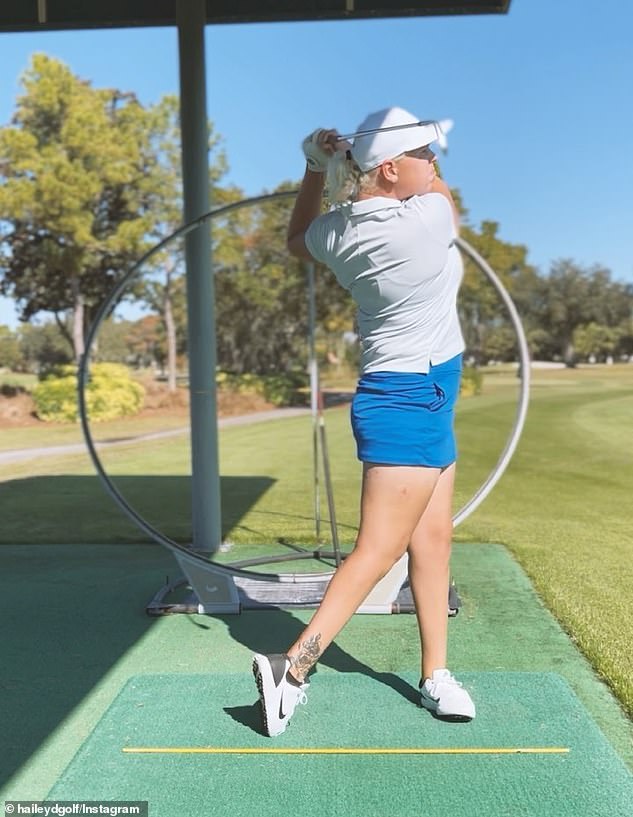 Davidson last competed as a male golfer in 2015, after which, she began hormone therapy treatments. She has been competing on the East Coast Women’s Pro Golf Tour 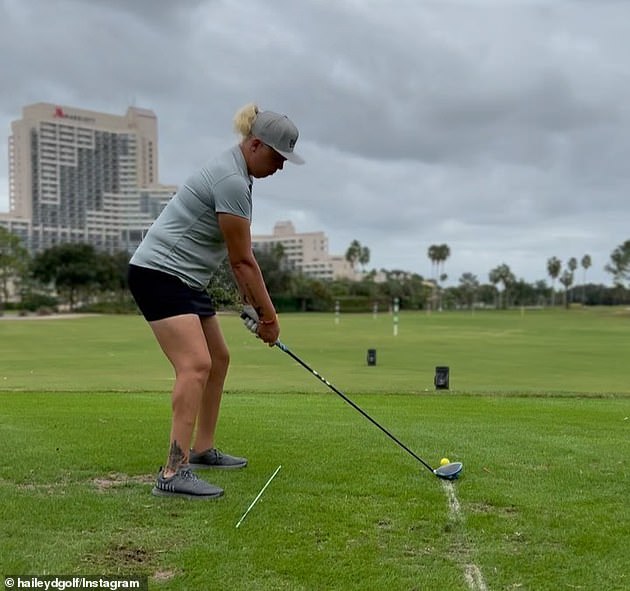 Davidson said that after her transition, she now hits the ball 15 mph slower, adding that she doesn’t have much of an advantage against other female golfers 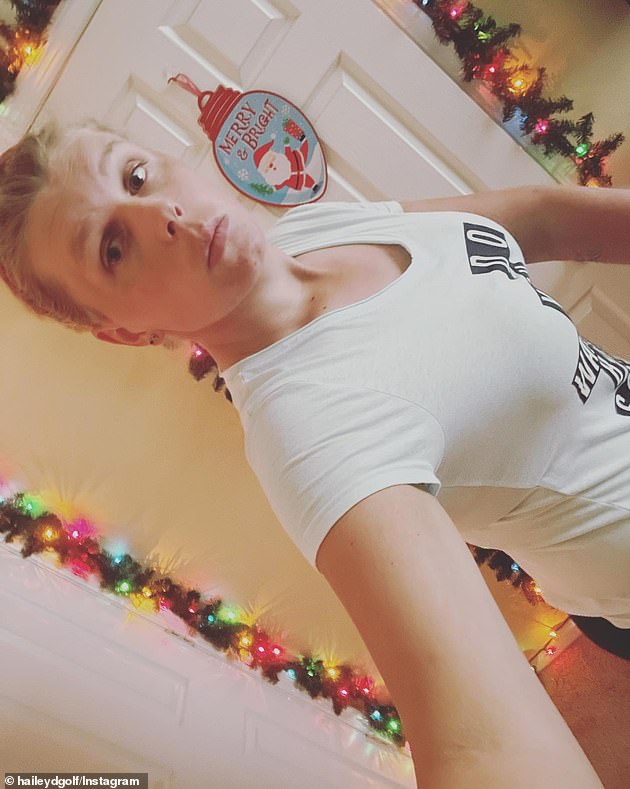 Davidson’s expected success in the first round comes amid a culture war in America over regulations in allowing transgender athletes to compete in women’s sports.

Although professional bodies like the LPGA and PGA set up their own rules and regulations, debates have erupted across the country over athletes competing in high school and college.

The issue took center stage this year with UPenn swimmer Lia Thomas, who began competing in women’s collegiate swimming a year and a half after transitioning.

Thomas went on to break several women’s records, much to the dismay of several of her teammates, and the NCAA and US Swimming bodies were criticized for allowing Thomas to compete. 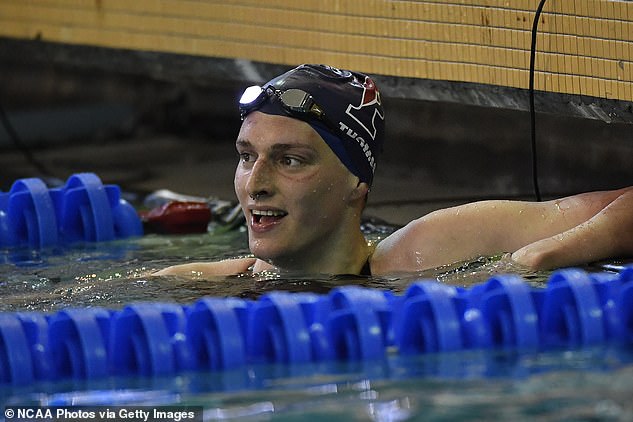 The issue took center stage this year with UPenn swimmer Lia Thomas, pictured, who began competing in women’s collegiate swimming a year and a half after transitioning

Professional competitive swimming association FINA has since effectively banned trans women from competing in the sport, by saying they must have begun to transition before puberty kicked in, which is illegal or almost impossible to do across most of the US.

By the summer, 18 states had outlawed transgender students from competing in girls’ sports.

One notable example is Ohio, which passed a bill requiring students accused of being transgender to provide a doctor’s note detailing their sexual anatomy, their testosterone levels, and their genetic makeup.

In New Jersey, Republican lawmakers proposed the Fairness in Women’s Sports Act, which would require female student-athletes to verify the nature of their genitals to compete.

The bill’s sponsor, Sen. Michael Testa, compared genitalia checks to random drug tests that college athletes are subject to, and said he didn’t foresee any problems with irate parents accusing girls of being transgender.