NEWTON CUP: Football rivalry unlike any other 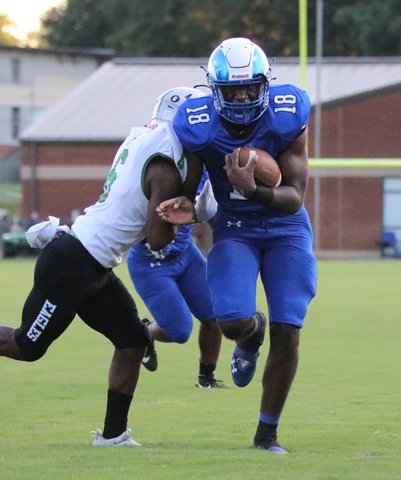 Since 2006, Newton County has had three high schools and, therefore, three football teams — Newton, Eastside and Alcovy — have battled on the gridiron and for the coveted Newton Cup as part of its round robin rivalry every football season.

But a rivalry that has spanned across a decade and a half has seen many noteworthy moments, and it started at the very beginning.

The first ever inter-county matchup in Newton County took place on Sept. 13, 2002 between the Newton Rams and the Eastside Eagles. In fact, this game was a region matchup as both teams were members of Region 8-AAAA.

Another three-game winning streak by Newton ran from 2009-2011, which featured the series’ closest margin of victory to date when the Rams won 10-3 in 2011.

One year later, Eastside enjoyed its biggest margin of victory against a Newton squad when it downed the Rams 32-0. The Eagles also won in 2013.

In the 2014 and 2015 seasons, the two teams didn’t battle on the gridiron. However, 2016 featured a close contest that produced the lone tie between any Newton County-based school.

Newton 41, Eastside 41. Why did it end in a tie? Well, given that this was a non-region contest, Georgia High School Association guidelines allow for overtime in non-region football games to be optional. The catch is, both teams’ coaches have to agree to overtime. If one chooses against it, the game automatically ends in an end-of-regulation tie.

That was the Eagles’ last win over Newton as the Rams have owned the past three seasons winning by a combined score of 90-21.

Facing each other for the first time on Oct. 27, 2006, the Eagles dominated the Tigers out of the gate winning the first three matchups by a combined score of 86-23.

Alcovy earned its first win in the series in 2009 by defeating the Eagles 3-0.

The two teams then traded two-game winning streaks in the following four years.

Eastside has enjoyed wins over Alcovy since 2014. The Eagles’ biggest win in the matchup came in 2015 when they downed the Tigers 41-0.

The past two seasons have shown signs of Alcovy closing the gap between the two schools – especially when you consider the 2020 game which ended with Eastside winning 34-31 in one of the closest matchups in the series.

Now, this particular matchup isn’t as steeped in history as one might think. Even though the first meet-up between the two came on Sept. 8, 2006, there was an eight-year gap (2010-2017) where Newton and Alcovy didn’t play each other.

Nevertheless, the rivalry matchup was actually owned by Alcovy early on.

Following the eight-year hiatus, Newton started dominating the series by defeating the Tigers by a combined score of 99-3. The Rams’ biggest margin of victory came in 2019 when they shut out Alcovy 45-0.

The two teams didn’t play  in 2021 due to the COVID-19 pandemic causing a game cancellation.

This year, all three schools will be playing each other again for the Newton Cup.

On Aug. 26, Newton and Alcovy will renew its rivalry at 7:30 p.m. The following week, on Sept. 2, Eastside and Newton will face off while the 2022 edition of the Newton Cup rivalry will conclude on Sept. 9 with Alcovy and Eastside squaring off.

The past few years, the Newton Cup has been captured by the Newton Rams. Will that streak continue or will Eastside or Alcovy rise up and claim the title?