Emma Raducanu’s form in Cincinnati is an encouraging sign for her US Open defence, says Martina Navratilova.

The 19-year-old has been under the spotlight since her triumph in New York 12 months ago and that will only intensify when she returns to play in the US Open.

There have been more downs than ups since she lifted the trophy at the Arthur Ashe Stadium, with niggling injuries disrupting her schedule and wins hard to come by.

But there are signs that perhaps Raducanu is getting to grips with the demands of the tour and last week at the Western and Southern Open was one of her best tournaments since here last year.

The teenager defeated Serena Williams and Victoria Azarenka back to back in one-sided matches before losing a close contest against Jessica Pegula.

Navratilova said: “She played well in Cincinnati. It was massive because, if she hadn’t won the US Open and she has the year that she’s had, she’d be pretty happy about it and the British press would be happy about it.

“She’s up and coming and rising in the ranks. But, because she won the US Open the expectations went so high, and we saw how well she can play – it’s not even about the results, it’s why aren’t you playing anywhere near the level you played at the US Open?

“She couldn’t answer it but she started showing those signs in Cincinnati so she’ll be very relieved I think with how she played and let’s see how deep she can go.

“Once you win a big one you’re a scalp for everybody to beat, people play better, a little extra oomph in their step and you’re looking over your shoulder. And then also they learn how to play you. 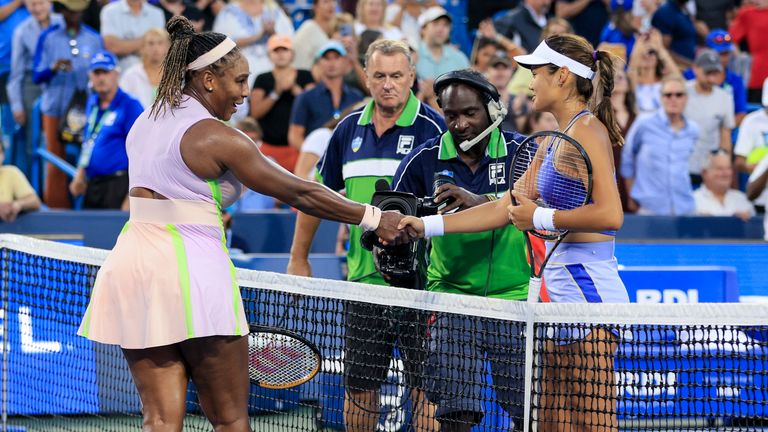 “It was amazing what she did. She’s paying the price for it but I hope she can put it together because she’s definitely a huge talent.”

Raducanu’s victory was one of the most unlikely tennis achievements of all time but she is far from the only unexpected winner of a Grand Slam on the women’s side of the sport in the last five years.

Fifteen different players have won slam titles since the beginning of 2017 and so far eight of those are one-time champions.

Sloane Stephens was ranked 83rd in the world and on the comeback trail after foot surgery when she won her only Grand Slam at Flushing Meadows in 2017.

The American’s career has been marked by inconsistency but she built on her success with a strong 2018 season, including reaching the quarter-finals again in New York.

Stephens admitted she did not enjoy the experience of defending the title but would advise Raducanu not to overthink it.

“I was happy when it was over,” Stephens said. “I thought it was going to be terrible and I was going to be miserable but it wasn’t. It was just stressful and overwhelming being a defending champion at a grand slam.

“But I had a good result, I made quarter-finals again. Obviously it’s always stressful being in New York and playing the US Open, especially defending a title, pretty extreme.

“It happens, it comes and goes and in two weeks’ time life will be back to what it is. I wouldn’t stress too much about it for her, there’s a lot of tennis left to be played in her career, she will be able to play and improve and regain those points.”

Raducanu, who could drop well outside the top 50 if she does not go deep in the tournament, will begin her campaign on Tuesday against France’s Alize Cornet.