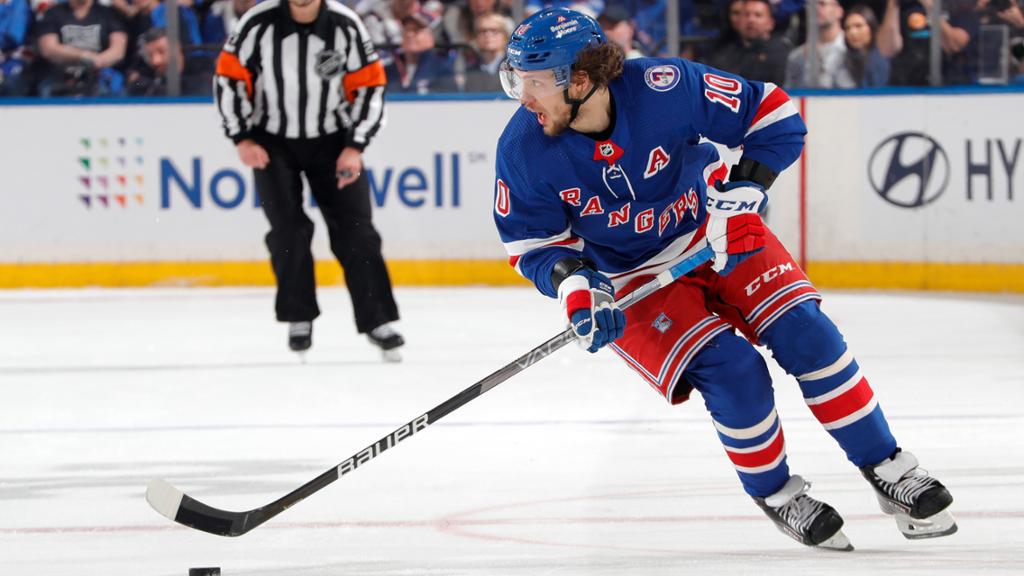 As part of NHL.com’s 32 in 32 series, the fantasy hockey staff identifies relevant players from the New York Rangers. For more coverage, visit NHL.com/Fantasy and subscribe for free to the “NHL Fantasy on Ice” podcast.

NOTES: These fantasy projections (for 82-game season), a collaborative effort by Pete Jensen and Anna Dua, have been quantified based on factors including but not limited to past performance in the regular season and Stanley Cup Playoffs, projected line combinations, power-play usage, team goalie situations, injury history or concern, sleeper upside, anticipated regression or bounce-back candidacy, age, contract status and overall upside for this season. The below totals are safe estimates and do not necessarily indicate each player’s ceiling or floor and should be used as a basis for decision-making in all fantasy leagues. Players are listed below in order of NHL.com top 250 rank.

Igor Shesterkin, G — The reigning Vezina Trophy winner had the best save percentage in the NHL last season (.935 in 53 games) and the highest in a single season since 2010-11 (Tim Thomas, .938) among goalies to play at least 50 games. Shesterkin also had the best goals-against average (2.07) last season, was third in shutouts (six) and sixth in wins (36-13-4). He has a .928 career save percentage, the best in NHL history (minimum 100 games) and should be considered a top 10 overall player and the second-ranked goalie behind Andrei Vasilevskiy of the Tampa Bay Lightning.

Artemi Panarin, LW — He was tied for 11th in the NHL in points (led Rangers with career-high 96) and was tied for sixth in power-play points (37). Panarin has averaged 1.34 points per game in his three seasons with New York (tied with Lightning right wing Nikita Kucherov for fourth in NHL over span) and should be considered a top 20 overall fantasy player and top five left wing with a chance to play on a line with center Vincent Trocheck (signed seven-year contract July 13; had 21 goals and 51 points with Carolina Hurricanes last season).

Mika Zibanejad, C — He is coming off NHL career highs in points (81 in 81 games; tied for 30th), assists (52), plus/minus (plus-30; led Rangers) and power-play points (28). Zibanejad was a fixture on the top line with elite wing Chris Kreider (third in NHL with 52 goals) and first power-play unit, helping the Rangers finish fourth in the NHL in power-play percentage (25.2), and should be considered a top 10 center and fringe top 20 overall fantasy player.

Chris Kreider, LW/RW — He had an NHL career high in points last season (77; third on Rangers), led the League in power-play goals (26) and was tied for ninth in power-play points (35). A fixture with Zibanejad at even strength and on the first power-play unit with Panarin, Fox and Zibanejad, Kreider should be considered a top 30 overall fantasy player because of his valuable hits coverage (nearly 2.0 per game in NHL career).

Nick Lodolo strikes out five in final start of 2022