Michael Mayer: Alycia Baumgardner needs more than that one punch to beat me | Boxing News 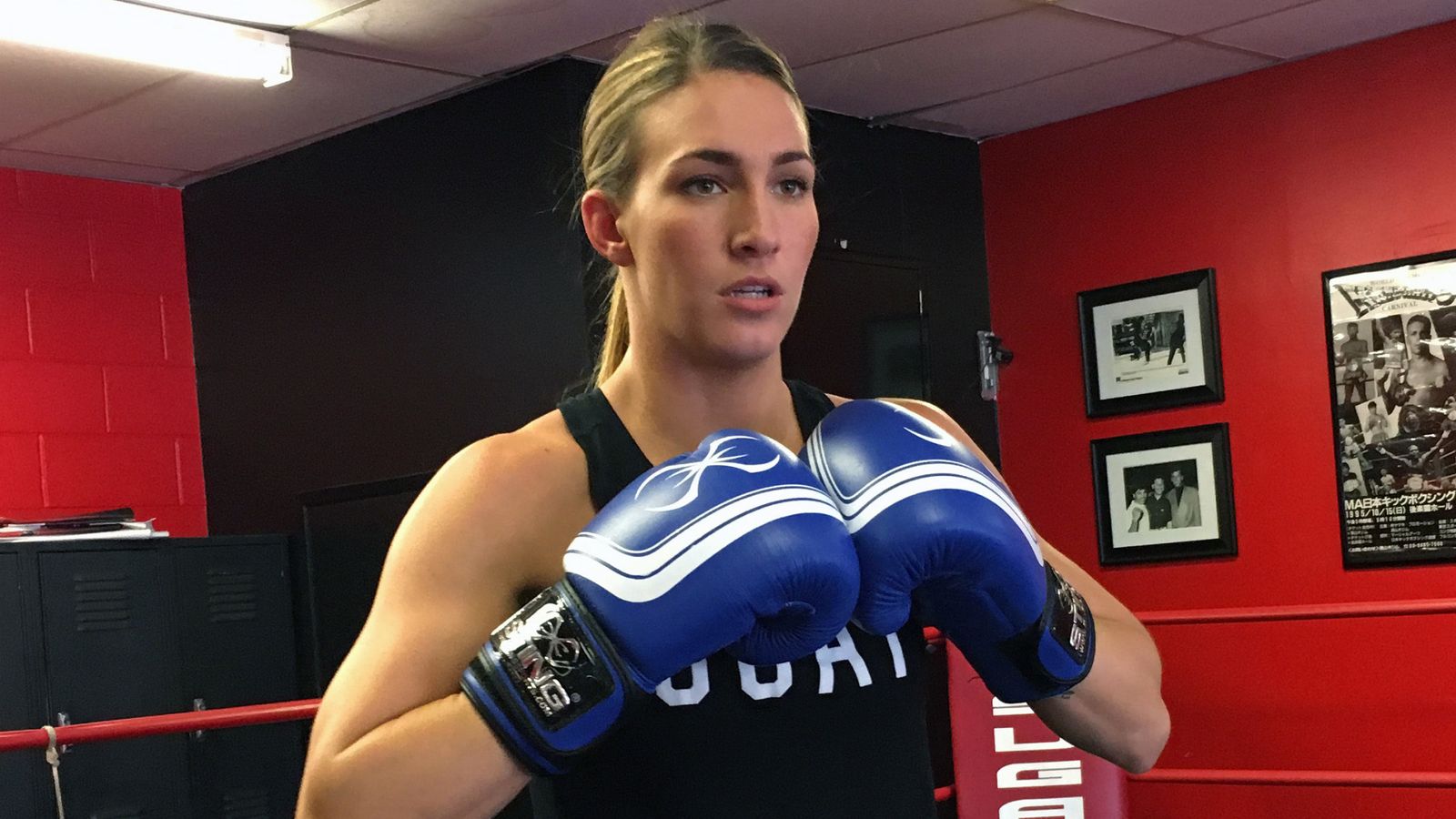 Mayer, the unified IBF and WBO super-featherweight world champion, fights Baumgardner on the historic September 10 bill at the O2 in London, live on Sky Sports.

Sharing the bill with Claressa Shields’ long-awaited grudge match with Savannah Marshall on an all-women’s card, Mayer and Baumgardner have their own ferocious rivalry.

“That’s when I’m going to take it to her and really just show the difference in our skill level.

“That one-punch knockout might be impressive to a lot of people but my style’s also just as effective and harder to train for.”

Mayer reckons Baumgardner’s most recent fight, when she went the distance with 42-year-old Edith Soledad Matthysse, revealed a limitation.

“Everyone thought that she was this big puncher, but really what she has to do is she has to land that right hand perfectly to get you out of there,” Mayer said.

“She wasn’t able to kick into that second gear. So that’s where I know her weakness is. If she can’t land that right hand, she doesn’t really have that second gear to press her opponent and get her out of there. Whereas I do, that’s what I’m good at. 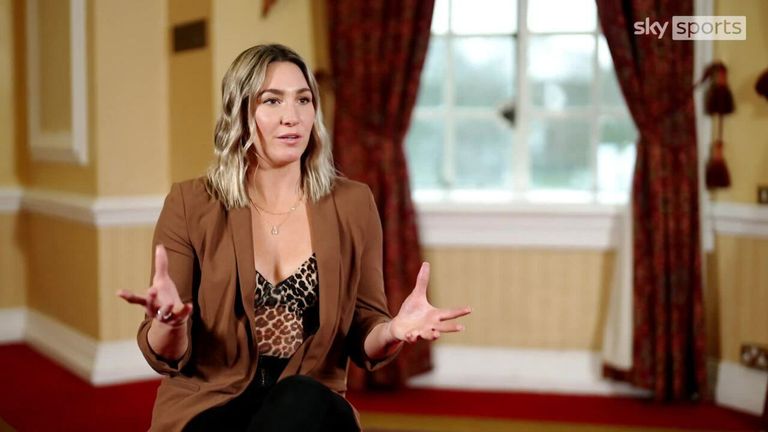 “I also know I can take it to her and she really doesn’t know what to do in that scenario. So once I get her number, she’s gone.”

A war of words has sprung up between the two Americans. “I come for them in a way where I’m really only speaking facts,” Mayer said. “She’s been a little bit more immature, aggressive and angry.

“I don’t know what she’s angry about honestly. I think she’s just angry that I called her out. I was building a rivalry with Terri Harper. She got her belt so naturally I’m going to come for her. That’s just me. That’s just what champions do.

“So she’s taken it personally,” she added. “The rivalry is real. It’s full blown and it’s real.”

Al Mitchell, a veteran US Olympic team trainer, has been Mayer’s long-time coach. Normally mild-mannered, even he is highly motivated for this fight.

“Coach Al’s going to see a side of me that he’s never seen before. He doesn’t have Twitter,” Mayer laughed.

Mayer does believe her corner will be a crucial factor in this contest. “I wholeheartedly trust in everything that he tells me and I think that’s a huge threat to my opponent,” she said.

“I know when I’m going into a fight that I have been pushed to my max. That I have done everything right, everything I possibly could and I was ready. Coach Al wouldn’t let me go into a fight not ready and that’s a huge confidence factor in me.

“A strong corner is more important than a lot of people think, especially going into big fights like this.”

Mitchell has worked with legends of the sport. “He’s a three-time Olympic coach. He was the head coach when Floyd Mayweather was on the team. He’s worked with Andre Ward as well. So he ran the programme up in Michigan for 20 years. He had all the killers up here. I was his first female,” Mayer said.

“He’s been in the game a long time, he raised Vernon Forrest and gold medallist Dave Reid since he was eight years old. He’s really built fighters up from the bottom which is also something not a lot of coaches can say.”

Mayer herself is determined to be a trailblazer in women’s boxing. “All I knew was I had a dream of becoming great and building a market for women in this sport and becoming an Olympian, just doing big things. I didn’t even know what it meant back then. All I knew was I had a passion for the sport and when I came up here to train with Coach Al I knew right away that he was the one who was going to get me to the top and my mindset hasn’t changed,” she said.

“He is still kind of shocked at where I’m at. He’s asked me, ‘Did you really think that you would ever be here?’

“I think he’s surprised at how much we’ve accomplished. Where we’re at, where women’s boxing is at, the contract that I recently signed with Top Rank and everything that I’m doing currently. He’s very shocked, he’s never seen it in his whole time, women’s boxing be at this level.

“So when he asks me, ‘Did you ever think this would be possible that you’d be here?’ I’m like yes, coach, yes, this is exactly what I thought. I had to believe that I would be here. But he just couldn’t see it. He just knew that I was a really, really hard worker.

“He’s never been about the money or clout or fame, he just wants to work with dedicated athletes. That’s what I was to him.”

The show on September 10 is a key moment for Mayer herself. “I’m down to be a part of this iconic event, do something great for women’s boxing,” she said.

Victory would lead her on to further opportunities still. There is no rematch clause between her and Baumgardner. If she wins, the fourth super-featherweight belt to challenge for would be the WBA title that Hyun Mi Choi holds.

“It’s a goal of mine to go undisputed. But it’s not the only goal.”

Top Rank’s Bob Arum promotes Mikaela Mayer. “Mikaela is a wonderful, wonderful person,” he told Sky Sports. “We have promoted all of her professional fights. I have great respect for her, she’s extraordinarily articulate, handles herself very well and is a really tough fighter – she’s done very well in the ring.

“I think that this card that’s put together for the O2 Arena for September 10 is an outstanding one. The Claressa Shields vs Savannah Marshall fight, becoming a real grudge match, should be a lot of fun.

“I’m coming over to the UK for that fight, to cheer on Mikaela and to watch the other fight. I think that thanks to Sky, women’s boxing now has a chance to really shine on the world sports stage and that’s good.

“Back when I was promoting some women fights like Lucia Rijker – who is now in the Hall of Fame – and Christy Martin, I could get no traction at all with women’s boxing even when some of these women were terrific.

“Now, thanks to broadcasters like Sky, we’ve kindled some interest in women’s boxing and I’m certainly looking forward to September 10.

“All of the fights on the card feature female boxers, BOXXER has put together a very attractive card and I hope the UK fans support it.”

The biggest fight in the history of women’s boxing – Claressa Shields vs Savannah Marshall – is live on Sky Sports on Saturday September 10. Be part of history and buy tickets for the London showdown here.