Minister played goalie for Bruins in 1943 game against Maple Leafs 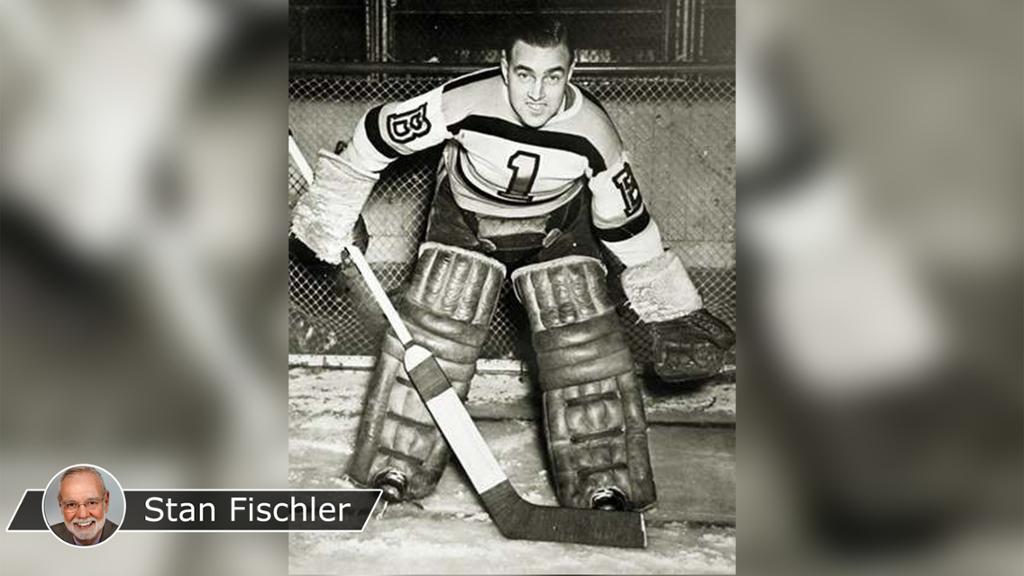 Legendary hockey reporter Stan Fischler writes a weekly scrapbook for NHL.com. Fischler, known as “The Hockey Maven,” shares his humor and insight with readers each Wednesday.

This week Fischler recalls when NHL goalies were hard to find during World War II because most had enlisted in the Canadian and American armed forces. That resulted in many curious replacements, including a Baptist minister who played for the Boston Bruins one night against the Toronto Maple Leafs.

Because of massive wartime enlistments during the early 1940’s, competent NHL goalies were as hard to find as new automobiles. By the time training camps opened before the 1942-43 season, the personnel situation was beyond acute.

Eventually Rangers manager Lester Patrick adutioned no less than seven goalies in training camp and none worked out. As a result the Rangers finished the season in last place. The situation worsened for other teams a year later. The Boston Bruins, for example, had to scramble when their future Hall of Fame goalie Frankie Brimsek enlisted in the U.S. Coast Guard.

Bruins manager Art Ross discovered that his recruits were either too young (Maurce Courteau, 23) or too old (Benny Grant, 35). The Bruins finally settled on 30-year-old veteran Bert Gardiner and hoped for the best because in those days teams did not have backup goalies on the road. That became an issue one night at Maple Leaf Gardens.

The Bruins were scheduled to play the Toronto Maple Leafs on Nov. 27, 1943, but Gardiner was too ill to even get out of bed. Without a backup goalie, Ross panicked and contacted his Maple Leafs counterpart, Hap Day. Knowing that he held the upper hand and likely two points in the standings, Day dispatched Toronto’s practice goalie, a Baptist minister named George Abbott, to the Bruins dressing room.

When Ross discovered who Day had sent, he snapped, “Hap, I asked for a goaltender, and you sent me a preacher.”

Abbott grew up in Sydenham, Ontario, a small town north of Kingston, and like many Canadian youngsters dreamed about playing in NHL.

“Abbott fantasized about wearing the uniform of the Toronto Maple Leafs,” wrote the Rev. Glen Goodhand, a historian for the Society For International Hockey Research.

Abbott followed his hockey dream, climbing the ladder from low amatuer ranks up to the Hamilton Tigers, a well respected Senior team just a few rungs below the NHL.

“But Abbott’s career more or less ended when a deflected shot hit him flush in the eye,” hockey historian Andrew Podnieks said. “At that point he decided to devote himself to the Baptist ministry and during World War II Rev. Abbott was assigned to the Toronto area.”

When told that the Maple Leafs were searching for a practice goalie Abbott approached Day who said, “Put on the pads and get in the crease, I can use you during our scrimmages.” And that he did, somewhat nervously but nonetheless thrilled with this rare opportunity.

“Abbott never realized that this backup position would lead to the greatest adventure of his life,” wrote Goodhand.

“The Bruins veteran defenseman Dit Clapper recalled that Abbott complained about ‘how hot it was in the (dressing) room’ and that he was so nervous he tried to put his right skate on his left foot. Once he was all decked out he requested permission to get out of the heat and go out to the runway leading to the ice. There he paced for half an hour before the opening face-off.”

Rev. Abbott said a few prayers and then took his place in the Bruins crease. During one break in the action the 32-year-old wiped his perspiring brow with a towel. That prompted Toronto Star columnist Milt Dunnell to write that Abbott “was sweating like a punctured watermelon.”

All told the Maple Leafs fired 52 shots at the preacher including one drive by defenseman Babe Pratt which knocked Abbott out for a few minutes. He soon regained his senses and continued to the end. The Maple Leafs won 7-4, but at least Abbott survived and received $150 for his efforts.

Now that his fantasy was fulfilled — somewhat traumatically he would admit — the preacher turned puckstopper happily returned to Maple Leaf Gardens and resumed his role as Toronto’s scrimmage goalie. Fortunately, for the good health and welfare of Rev. Abbott, he never played another NHL game!

Art Ross may not have agreed with Abbott’s new nickname, but one headline writer summed up his adventure with this banner: THE GOALIE FROM HEAVEN!