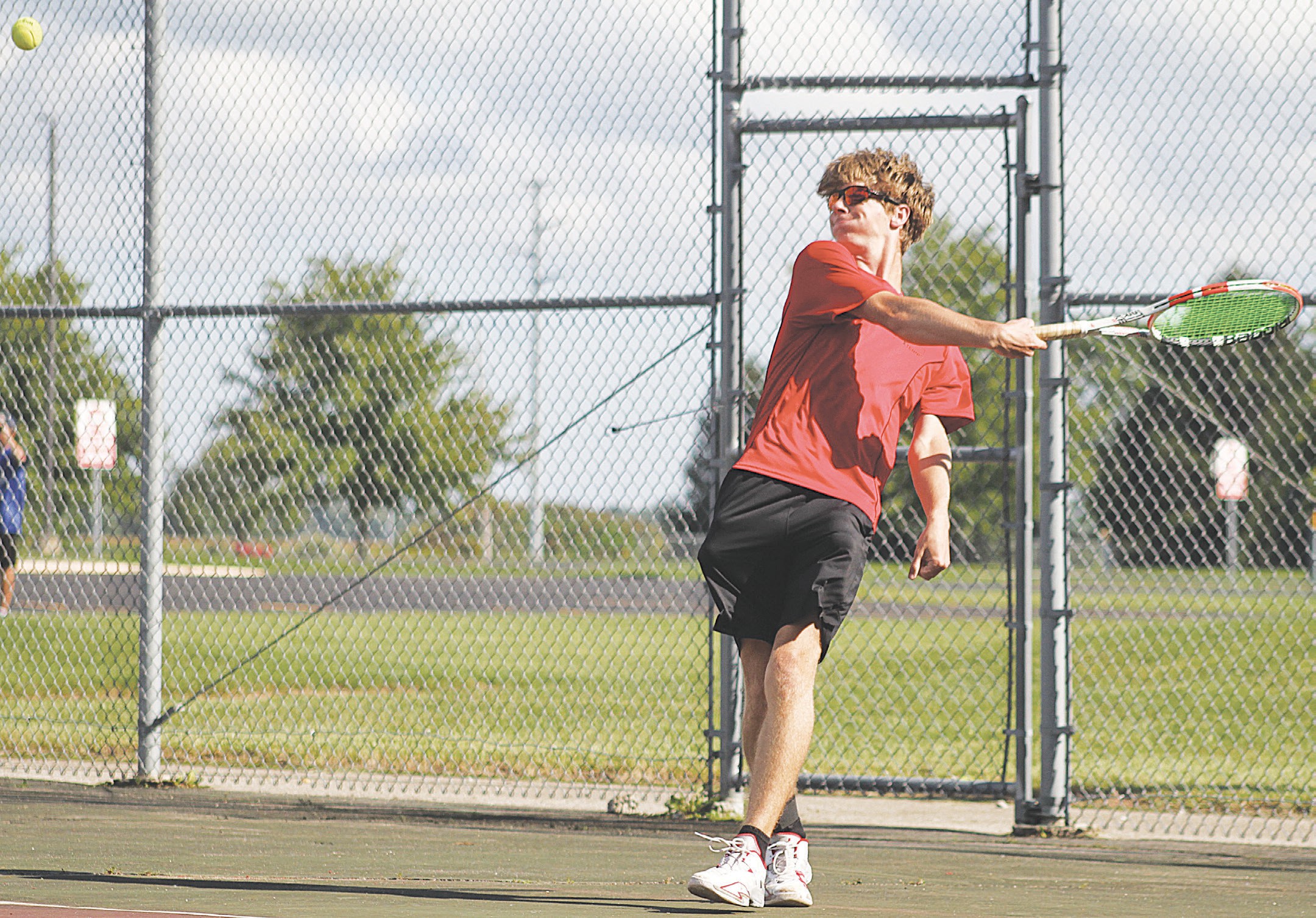 SANDUSKY — For the first time since its creation, Sandusky brought home first place at the Sandusky Tennis Invitational last Friday.

“It’s exciting and it’s great for the program,” said head coach Matt Dickendesher. “We’re back in the tougher region this season and it’s nice to have a victory like this, so no matter what happens at the end of the season, we have something where we can say we had a pretty good season.”

“I’m very happy,” Dickendesher said. “Everybody medaled and we had some big wins. No. 1 singles (Jonathan Wentzel) was a big win, as he lost to Bay City last week and came back to beat them today in a tiebreaker in the most exciting match of the day. We saw some more improvements from the match with Bay City last week, so you can tell that they’ve gotten better, even in a short amount of time. Everybody stepped up and played well today.”

The Sandusky tennis team poses with its first-place trophy and medals from the Sandusky Tennis Invitational last Friday. Sandusky medaled in all eight flights, including first-place finishes in six of the flights. It is the first time Sandusky has won the Invitational since it’s start in 2015. (Photo by Mike Gallagher)

Sandusky had first-place finishes in six of the eight flights, including Wentzel (No. 1 singles), Jackson Kartanys (No. 3 singles), Caleb Minard and Carson Shampo (No. 1 doubles), Gabe Drabant and Christian Shuart (No. 2 doubles), Jacob Papp and Carson Shuart (No. 3 doubles) and Isabella Stoutenburg and Logan Trepkowski (No. 4 doubles).

Annie Ross added a second-place finish at No. 2 singles and Emma Minard took third at No. 4 singles.

Sandusky entered the day with a 2-0 overall record on the season, after defeating John Glenn and Frankenmuth the week prior.

“We’re getting better serving-wise,” Dickendesher said. “Our younger players are starting to push our veterans, which is good. We have a 17-person team, and only 12 can play varsity, but our 13 through 17 are getting close to ready to go if something happens to one of the top 12. We’ve got experience and everyone is getting better.”

This season, Sandusky has beefed up its schedule to help prepare for regionals, after qualifying for the state finals last season and going 10-2-2 overall.

In 2021, Sandusky competed in region 28, but this season, will make the move back to region 31, with private-school tennis powerhouse Liggett.

For Cros-Lex, Jimmy Krampits took first place at the Sandusky Invitational in No. 2 singles.

Sandusky was back in action on Monday night, after press deadline, at Imlay City, and will return home to face Imlay City again on Sept. 6.

Jonathan Wentzel (No. 1) and Kartanys (No. 3) earned wins in singles play, while all four doubles teams, including the No. 4 team of Abbey Thorp and Zachary Scribner, were victorious.