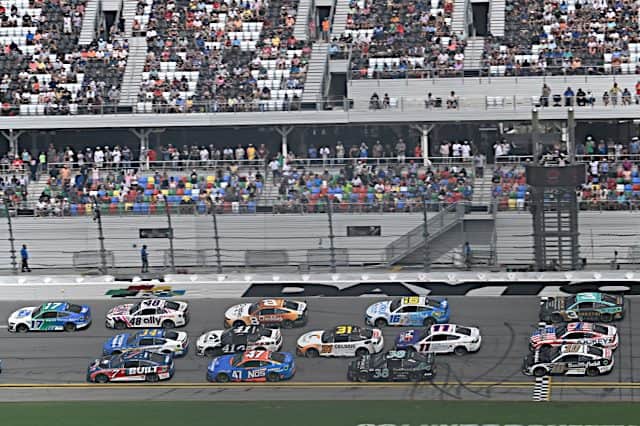 DAYTONA BEACH, Fla. – While there were no cars on track during a rainy Friday (Aug. 26) afternoon at Daytona International Speedway, there was still plenty of noise being made within its media center.

Amidst a whirlwind of rumors surrounding the silly season ahead of the approaching 2023 calendar, multiple news stories broke out for various drivers in the NASCAR Cup Series garage, which might change where some drivers are racing next year.

Here, we’ll break down what each one means and how it affects the outlook of the future of some Cup Series drivers.

It wasn’t the most unexpected piece of news that came out on Friday, but it certainly was the most critical.

Aric Almirola will return to Cup Series competition again in 2023 after he announced he had delayed his retirement, which he originally announced at the beginning of 2022, until at least the end of next year.

He owes his decision to his loyal sponsor Smithfield, as the meat brand agreed to stay with the Floridian for another two years. While Almirola staying is a big deal for, well, Almirola fans, it’s an even bigger deal for fans of Kyle Busch.

Because Busch is the biggest free agent in NASCAR as of now, and while he could very well resign his contract with Joe Gibbs Racing, it was also heavily rumored for him to go to the Stewart-Haas Racing car left vacant by the leaving Almirola.

But now that ship has sailed, and suddenly, Busch has fewer options to choose from if he decides to leave his home of 14 years, JGR. Not to mention, with each race that Ty Gibbs performs well in the No. 45, filling in the No. 18 becomes all the more tantalizing for team owners and presidents.

While that doesn’t help Busch, it’s even worse for other drivers.

Preece has spent this year piecing together part-time rides as a reserve driver for SHR. A Rick Ware Racing start here, a BJ McLeod Motorsports start there and sprinkle in some solid NASCAR Camping World Truck Series starts for David Gilliland Racing, and you have the 2022 season of the 31-year-old from Connecticut.

All the while, Preece had been arguably first in line to take an SHR ride for some time — barring any contract deals with the team’s sole NASCAR Xfinity Series driver, Riley Herbst. When Almirola revealed his retirement plans, many eyes slid over to Preece’s corner of the room, as it seemed his time to return to Cup had come at last.

But now his chances at a return have become a little more unlikely.

I asked @RyanPreece_ about how the recent Aric Almirola retirement delay has altered his silly season plans. 👇

“At the end of the day, I’m a racer. It doesn’t matter if it’s in the Northeast or here … Things change constantly in the sport. Things can change tomorrow.”#NASCAR pic.twitter.com/ICbK1SowBZ

It isn’t surprising that Daniel Suarez will return to Trackhouse Racing Team for another year. After all, the Mexican driver earned his first career win at Sonoma Raceway and has already scored a career-most top-five finishes with six so far this year.

What is surprising about this news is the fact that it’s only for another year.

Suarez first joined the team in its maiden year in 2021 and has stayed for its two years of existence. If the team is confident in Suarez’s talent, why only award him with a one-year extension, especially when it’s a driver that has been there since the beginning?

However, there is the speculation of the new media rights deal could affect how teams will be reimbursed financially, and it could have impacted how each team prepares their contracts for 2024.

There’s also the fact that Trackhouse is still a young team despite its success. With success comes growth, and with growth comes a healthier team financially. Suarez may not have a secure seat for 2024, but that might not mean team co-owner Justin Marks doesn’t have plans for the Mexican driver.

Regardless of how one interprets it, Suarez is safe for at least one more year in his new Trackhouse “home.”

Although, the same may not be said about some other drivers.

Alex Bowman will continue his role in the No. 48 in 2023, but his veteran crew chief Greg Ives will not be there with him.

Ives, who has been in a NASCAR crew chief role since 2013 when he began sitting on top of the pit box for JR Motorsports before being promoted to Cup in 2015, announced he will be retiring at the end of 2022.

Bowman has won all of his seven Cup Series victories with Ives. With his tried-and-true crew chief leaving, what does that mean for the Arizonian driver?

His current contract means he is still safe at Hendrick Motorsports until the end of 2023, but Bowman has statistically been the weakest performing driver at the organization this year. Bowman’s performance next year will be all the more crucial for his career, and he’ll have to perform with someone new on top of the pit box.

There is blood in the water for what will be a frenzy of drivers looking for rides during the silly season at the end of 2023. There is a cornucopia of young talent advancing its way through the ranks with each year including those currently at JR Motorsports.

While Noah Gragson has a ride with Petty GMS Motorsports lined up for him next year full time in the Cup Series, that doesn’t mean he won’t be open for another ride by the end of 2023. On top of that, there’s Sam Mayer, who has had a quiet season so far in 2022 in the NASCAR Xfinity Series but has still shown talent that will likely grow in 2023.

It doesn’t really have much to do with the silly season on the track, but it does have something to show for when it comes to NASCAR’s branding.

The return of Craftsman in the NASCAR Truck Series is a welcome one for fans of the sport that have been around for a while. It’s the first time the red tool brand will be the title brand for the series since 2008, a 15-year hiatus.

The announcement was made as a result of NASCAR’s new partnership with Stanley Black & Decker, which is the parent company to Craftsman.

It’s not yet known how much the brand has offered in terms of finances for the sponsorship, but it does shed some light on what was becoming a gloomy subject after Camping World announced they would leave as the series title sponsor last month.

The Truck Series has traded sponsorship hands a couple of times in the last few years, but with a company that stuck around in the division for 13 years before it departed the first time now returning, maybe we’ll see a little more stabilization when it comes a series title sponsor.

Friday at Daytona wasn’t the only day where some major news broke out.

After Jeremy Clements‘ most recent win at Daytona in the Friday-into-Saturday Xfinity Series race, NASCAR took the No. 51 Chevrolet back to its R&D center to inspect its engine. While there, officials found the intake manifold did not conform properly to NASCAR’s template.

Clements’ team was docked 75 owner and driver points and 10 playoff points, and their win became ineligible for the 2022 playoffs. Clements had initially qualified for the playoffs with the Daytona win.

So what does this mean for the Xfinity playoffs?

Well, not much, really. Clements was likely never going to win the championship. What it does mean, however, is there is still one extra spot left for drivers like Sheldon Creed to fight over for that last spot in the top 12 in points.

Clements is currently 20th in the regular-season standings now with almost no chance at making the postseason on points alone. He still has the option to win again and reclaim that playoff spot. Will it happen though? Probably not. That being said, at least the 37-year-old still has two career Xfinity Series wins now. That’s more than most small family-owned NASCAR teams can say they’ve got. There’s some pride in that.

If it weren’t for the fact that the inspection took place away from the track, however, there’s a good chance that Clements would have been disqualified and second place would have won the race.

We were *this* close to a Timmy Hill win.

A daily email update (Monday through Friday) providing racing news, commentary, features, and information from Frontstretch.com
We hate spam. Your email address will not be sold or shared with anyone else.