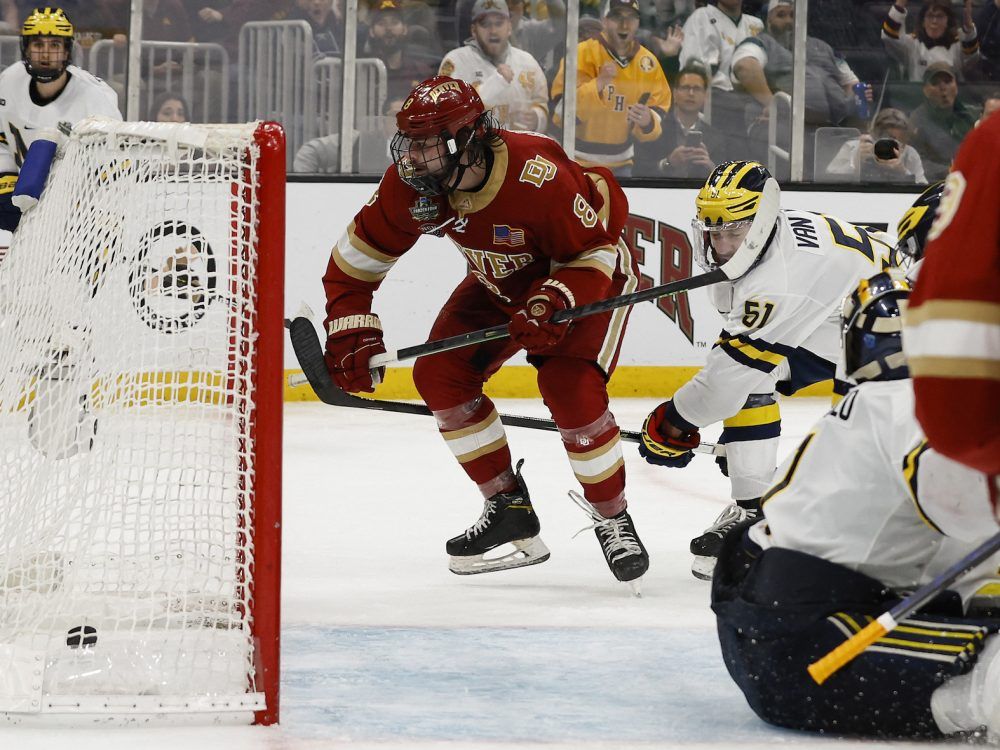 Sign up to receive daily headline news from the Edmonton Journal, a division of Postmedia Network Inc.

Thanks for signing up!

A welcome email is on its way. If you don’t see it, please check your junk folder.

The next issue of Edmonton Journal Headline News will soon be in your inbox.

We encountered an issue signing you up. Please try again

But slipper sniper Carter Savoie is sliding up the rankings of Edmonton Oilers prospects and it’s not far-fetched to think that in a few years he could be playing on Connor McDavid or Leon Draisaitl’s wing. That eventuality remains a long shot, but Savoie flashes the offensive skill and smarts to keep up on a line with McDavid or Draisaitl, he just needs to develop the speed, athleticism and defensive acumen to hang there. 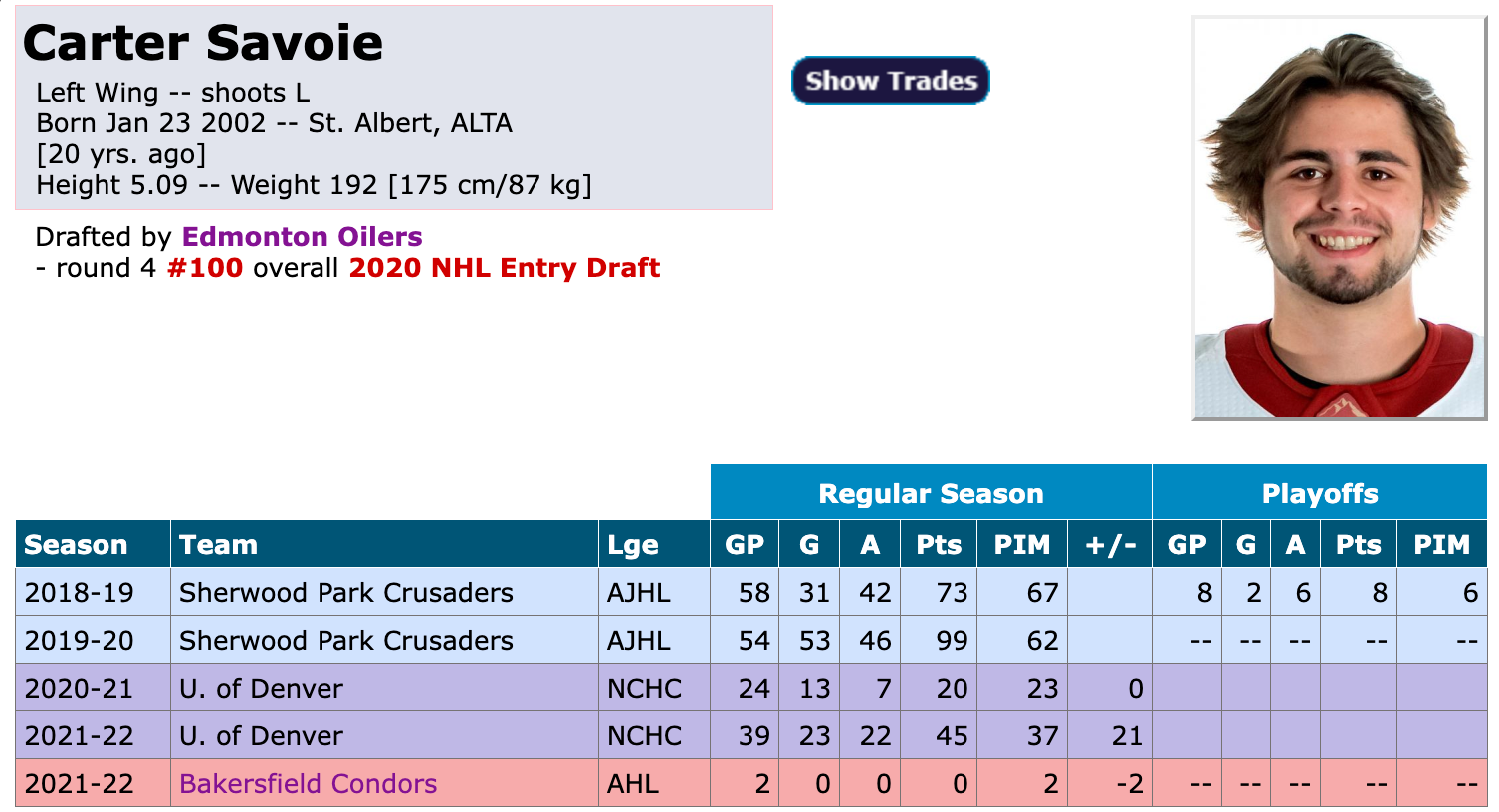 Savoie, now 20, has put up big time points at every level he’s played, which sounds more impressive than it is. A big-time scorer in major junior hockey might flame out in college hockey or in the American Hockey League, which is the next stop in Savoie’s hockey journey. A top AHL scorer might never break in as an attacking forward at the NHL level, as seen in recent years with Cooper Marody and Tyler Benson, two Oilers prospects who were dominant AHL scorers, but lacked the speed and agility to become NHL Top 6 forwards. Benson is now trying to reinvent himself as an NHL checker.

With Savoie, it looks like he’ll be a first or second line winger at the NHL level or he’s not every going to make it. He doesn’t have the speed, size or checking ferocity to be an NHL role player. But he’s got the brilliant shot and playmaking skills that could have him find a home on the first or second line of an NHL team one day.

Savoie has come a long way since he was taken 100th overall in the fourth round of the 2020 entry draft. He’s had two high-scoring years at Denver University, and helped lead his team to an NCAA Frozen Four championship this season, scoring a thrilling overtime goal in the semi-final.

He’s earned strong reviews in this time, starting early in his freshman year at Denver, when the Cult’s Bruce McCurdy reviewed a handful of his games in November and December 2020. “Interesting player,” said McCurdy, “He doesn’t jump out at you for raw talent: slightly undersized, average skater, OK but nothing special on the defensive side of the game, but put a puck on his stick and look out. Very deceptive player with a full bag of tricks, including a knack for drifting nonchalantly into better position, maybe changing the shooting angle in the process, and WHAM.”

After his first college season, The Athletic’s Scott Wheeler had this to say: “As he continues to build on the things that he’s good at, if he can get himself into less trouble in the other areas (a lot of which comes down to decision-making and maturity), he’s going to make his 100th overall selection look like a home run for one team and a blunder for 30 others.”

I also watched a handful of Savoie’s games in 2020-21 in Denver and came away impressed, noting that if someone had told me that Savoie had been the Oil’s first round pick in 2020, I would not have been disappointed. The kid was that good. His eyes were always up, always. When he got the puck he knew exactly what to do with it and he had the skill and co-ordination to make the right play.

More recently, as he improved his point-per game average in college hockey from 0.86 points per game as a rookie to 1.15 points per game in his sophomore year, Wheeler returned to Savoie’s evaluation: “Before college, Savoie was perceived to be a come-and-go, disengaged-without-the-puck, one-dimensional scorer who would cheat up ice, lacked commitment defensively, and needed to get into better shape. And while some of those things were true and remain works-in-progress, there is a lot more to Savoie (there was then and there certainly is now). He is not a liability with Denver, he’s actually a very physically involved player, his habits have improved, his fitness has improved, and his skill level gives him undeniably, game-breaking upside as a finisher and creator who can score off of one good look (and often off of bad ones) from anywhere in the offensive zone. He’s a brilliant one-shot scorer with an accurate shot, a booming one-timer, a deceptive release that routinely fools a goalie with its timing, and a flair for the dramatic in big moments. But he also goes to the front of the net and scores a lot of tap-in goals at the top of the crease.”

For all that, in the most recent evaluation of Savoie, this time from The Athletic’s Corey Pronman, there was some doubt about how his game would translate into pro hockey.

Said Pronman: “Savoie is great with the puck on his stick, possessing very good hands, vision and a shot that’s a threat from range. He’s not that big, and more quick than fast with an average game away from the puck so it’s unclear what his NHL role would be.”

Pronman has a point. It’s more likely that Savoie tops out as an OK AHLer as it is he strikes it big as an NHL sniper.

He’s got a long list of talented players in the Edmonton system that he’s got to beat out to make it onto one of those top two lines, first-rounders like Dylan Holloway,  Xavier Bourgault and Reid Schaefer, but also other promising lower round picks such as Matvei Petrov, Raphael Lavoie and Ty Tullio. The competition will be fierce.

Is Savoie up to it? I can’t say but it’s going to be a helluva fascinating time these next few years watching these young wingers work together and compete among themselves. It’s a talented bunch. One or two or three of them might well hit as Top 6 NHL wingers. That would be more than enough for the Oilers.

Expectations for 2022-23: That Savoie break into the Top 6 in Bakersfield, getting some power play time, and putting up at least a point every second game. 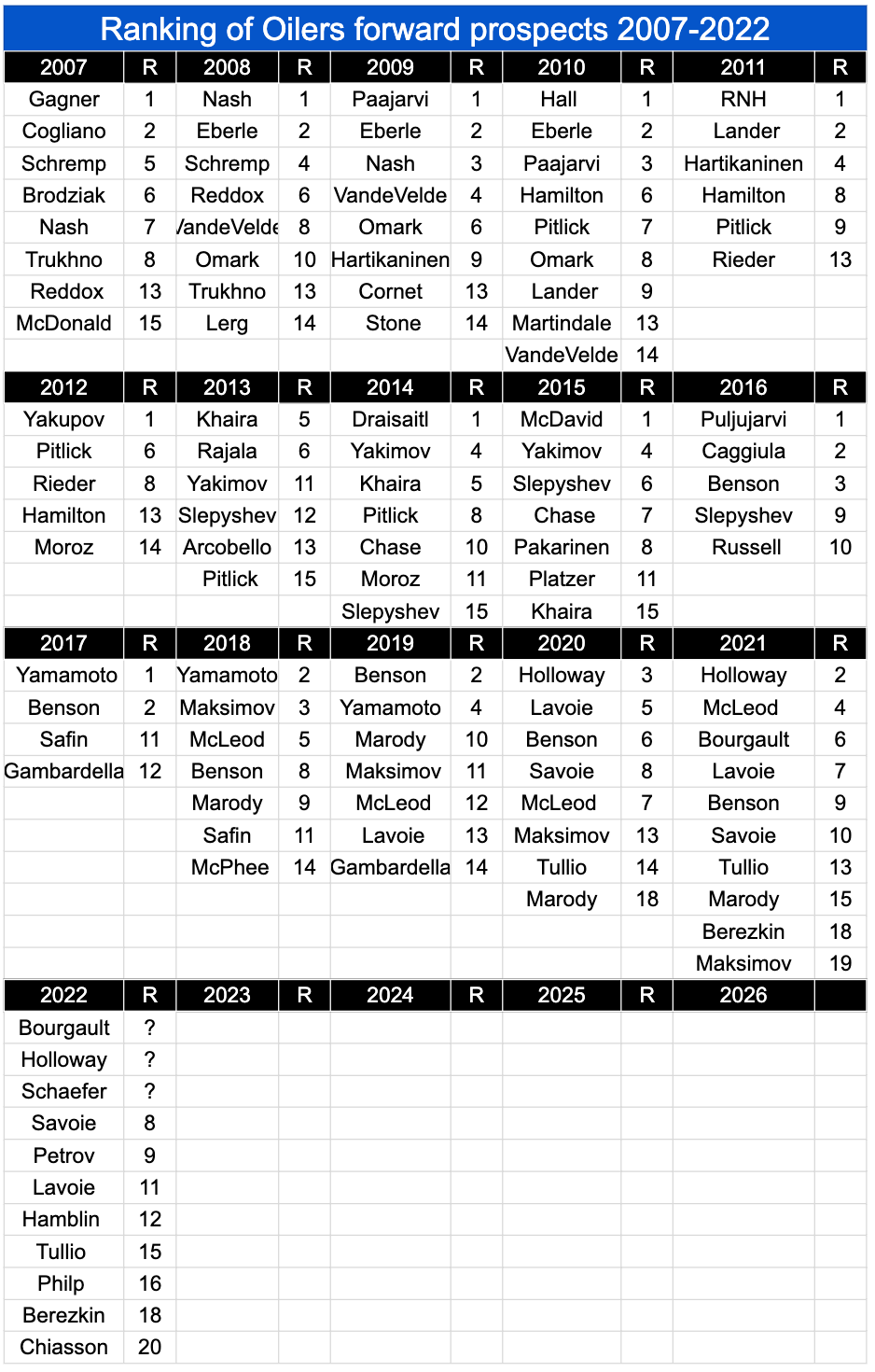 Travis Toews steps up as no nonsense candidate but is it enough to beat Danielle Smith?