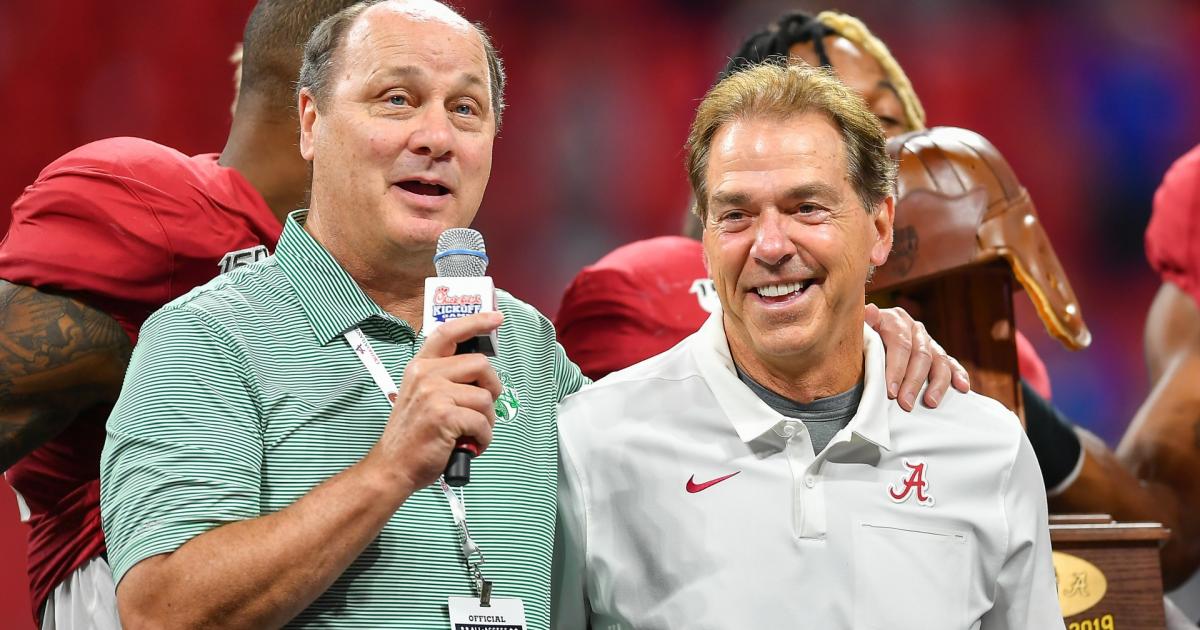 Now, the city could be considered the capital of college football. At minimum, the 2022 season will be another flex for the state of Georgia starting with the Chick-fil-A Kickoff weekend, which features matchups between No. 11 Oregon and No. 3 Georgia on Saturday and No. 4 Clemson and Georgia Tech on Sunday. Both games are nationally televised events at Mercedes-Benz Stadium.

Add in the SEC championship on Dec. 4 and this year’s College Football Playoff semifinal at the Chick-fil-A Peach Bowl on Dec. 31, and it’s clear the ATL is the place to be.

“Five of the six teams that will play in our three games (the two kickoff games, plus the CFP semifinal) will be ranked in the top 12,” Stokan told Sporting News. “You put on top of that the SEC championship game in early December will probably have two top-10 teams, four games we have – seven of the eight – could be top-12 teams. In Georgia’s case, they want to play here three times this year. Clemson wants to play here twice.”

That’s not all. Atlanta will host the College Football Playoff championship game for the second time on Jan. 6, 2025. The following season, a CFP semifinal will return to Atlanta on Dec. 27, 2025.

So, why did this take 20 years? Stokan recalled touring the old College Football Hall of Fame in South Bend, Ind., with the late Alabama athletic director Mal Moore in 2001. Moore looked at Stokan and one point and said: “It’s interesting there is nothing from Bear Bryant in this Hall of Fame.”

Stokan was taken aback, but then thought about it: “Boy, if this was in Atlanta they would have 300,000 people go through this place, and it would really establish Atlanta in college football,” Stokan said he told Moore at the time.

There was work to do when Stokan took the job in Atlanta in 1998. He helped the Atlanta Sports Council land the Peach Bowl, which has elevated in importance in the CFP era. When Stokan found out Atlanta wasn’t going to be part of the BCS championship rotation, he adapted the approach for Atlanta. The Chick-fil-A Kickoff Game started in 2008 when No. 24 Alabama beat No. 9 Clemson 34-10, a game that unofficially launched the Nick Saban dynasty.

“I’m so competitive, look we’re going to start the BCS on the front side of the season if they’re going to let us in on the back side of the season. Now, with the advent of the CFP, it has become a key differentiation point for the selection committee because they reward people who play tough non-conference schedules. There is such a thing as a good loss.”

MORE: Week 1 picks against the spread for every Top 25 game

More adaptations are sure to come with the swiftly-changing college football landscape. The Clemson-Georgia Tech matchup is an ACC conference game, the first conference opener at Mercedes-Benz Stadium. Stokan said the SEC-Big Ten dynamic is being explored, but because Big Ten teams play nine conference games, “We’ve talked to them but we haven’t hit the chord yet on what makes sense for them.”

That ability to host huge college  football games, however, made Atlanta a logical place to host the 2025 championship game when Las Vegas, a potential site, was ruled out. The Atlanta Sports Council led the bid, and Stokan said the cohesiveness of the working groups involved makes that possible.

“It’s a great tribute to the city, and when I say that it encompasses everybody from the airport to the hotels and restaurants, the city, mayor and the governor’s office, the Georgia World Congress Center, Mercedes Benz-Stadium, the Georgia sports council and the Convention Visitors Bureau,” Stokan said. “Everybody works together to bring in these big events.”

Atlanta isn’t done yet either. The World Cup will have games in Atlanta in 2026. Bids for the  Final Four, which was lost during COVID-19 in 2020, and the Super Bowl, are out. The Atlanta Braves won the World Series last year and are in contention again.

Talk about a hot streak. That will continue with college football, and Stokan said this year could have a $100 million impact on the city’s economy.

“You put that SEC championship with our three games, and you’re talking about four of the largest six conventions there will be in Atlanta this year, and we’re the fourth largest convention city behind Chicago, Orlando and Las Vegas,” Stokan said. “That’s how important it  is from an economic standpoint in Atlanta.”