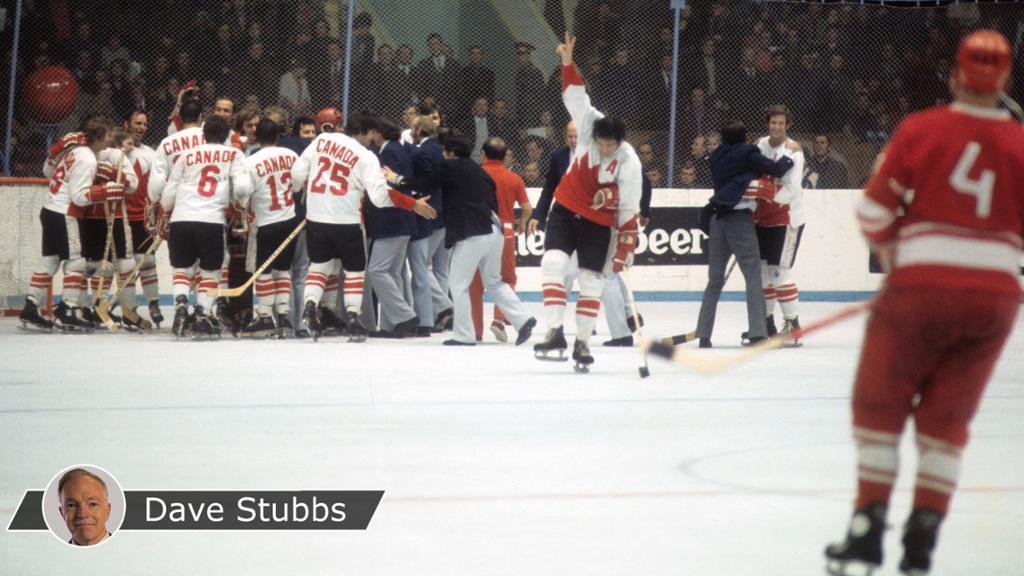 “That series clearly and undeniably is the most important moment in hockey’s history. Not Canadian hockey history, but in hockey’s history,” the Hall of Fame goalie told NHL.com on Thursday on the eve of the 50th anniversary of Game 1, a stunning 7-3 romp for the Soviets at the Montreal Forum on Sept. 2, 1972.

“Up until that moment, hockey was definitively a Canadian game,” Dryden said. “We were the originators of hockey, the developers, the world’s best at it. Our way was the hockey way.

The Russians had defeated a team of Canadian amateurs 5-0 at the 1968 Olympics in Grenoble, France, the Soviets on their way to the gold medal, Canada winning bronze, leading bombastic Soviet coach Anatoli Tarasov to brag that his team could beat the best the NHL could throw at him. Hockey Canada accepted the challenge, negotiating with the Soviets through NHL Players’ Association president and player agent Alan Eagleson to set up an eight-game series to be played in September 1972.

Canada would rebound from its Game 1 humiliation with a 4-1 victory in Game 2 in Toronto two nights later. The teams then tied 4-4 in Game 3 in Winnipeg on Sept. 6 before the Soviets won 5-3 in Game 4 in Vancouver on Sept. 8.

With that Game 4 loss, a good deal of Canada on the backs of the team, Phil Esposito emptied his heart on live television after the game:

“To the people across Canada, we tried, we gave it our best,” he said. “And to the people that boo us, geez, I’m really… all of us guys are really disheartened, and we’re disillusioned, and we’re disappointed at some of the people. … If the Russians boo their players, then I’ll come back and apologize to each one of the Canadians but I don’t think they will.”

Esposito went on, saying the team suited up for love of country, not money. And at that point, a nation realized that these players truly cared about what they had signed on for.

“It’s the most vivid, meaningful hockey experience that I have had,” said Dryden, author of the new book “The Series: What I Remember, What It Felt Like, What It Feels Like Now.”

“I think the odd thing, which is really interesting and really revealing, is that I think almost all the players on the Soviet team would say the same thing. They won all kinds of world championships and Olympic gold medals, and they didn’t win this series.”

Dryden was the NHL’s dominant goalie in the 1970s, a brilliant performer for the Montreal Canadiens. He won the Stanley Cup six times, the Vezina Trophy five times, and the 1971-72 Calder Trophy as the NHL rookie of the year after he’d won the Conn Smythe Trophy as MVP of the postseason.

Elected to the Hockey Hall of Fame in 1983, Dryden was voted among the 100 Greatest NHL Players in 2017 for the League’s centennial celebration.

But all of these achievements are filed behind his experience with Team Canada in the Summit Series.

A half-century later, those eight games remain a defining moment of the game — for the vastly different style of play, for the dramatic Cold War politics of the day, for a series that was anything but the walk-over predicted for Canada.

Through the years, there have been World Championship, Olympic Games, Canada Cup and World Cup tournaments and various tours and one-off games between NHL teams and squads from the former Soviet Union. But no series has had the importance of the Summit Series, and no other has pitted political ideologies against each other or reshaped the very way hockey is played.

Russia’s Valeri Kharlamov leads his team through warmups at the Montreal Forum before Game 1 on Sept. 2, 1972. Melchior DiGiacomo, Getty Images

“The way the Soviets played just opened minds,” Dryden said. “It took a while for those minds to open fully, but after that series, people did start to think about the training a different way — off-ice training and the value of that. Of on-ice training, where a pass fits in and the patterns in which you play. Once there’s a second way to play, there’s a second way, a fifth way, a tenth way.

“Players start to imagine different ways to do things and conceiving of them and practicing them and making them happen. And coaches do the same. That all is the legacy of that series.”

It began with the largely unknown Russians, laughed at for their mismatched equipment, demolishing Canada in Game 1.

The opener began predictably enough, the hosts up 1-0 after 30 seconds on a goal by Phil Esposito, up 2-0 by 6:32 on a goal by Henderson.

But the superior conditioning of the Russians soon was evident; they scored twice on Dryden before the first period was over, once shorthanded, then twice more in the second. A goal by Canada’s Bobby Clarke at 8:22 of the third on Russian goalie Vladislav Tretiak offered a flicker of hope, but the Russians then scored three unanswered goals in a span of 5:05 to make the embarrassment complete.

Defenseman Pat Stapleton, a member of Team Canada, tirelessly promoted the series, its historic significance and its legacy — in schools, with passers-by in the street and everywhere in between — until his death in 2020.

In 2016, sitting in the Montreal Forum, the hockey rink dismantled 20 years earlier with the building’s renovation following the Canadiens’ move to the Bell Centre, Stapleton thought back to 1972 and remembered the shell-shock of Game 1.

“We got on the bus after the game, and I was sitting at the window when Ken (Dryden) sat down beside me,” he recalled. “He turned to me and said, ‘What happened?’ and I remember saying, ‘I think we lost our composure.'”

Sitting almost wordlessly bound for the airport and their flight to Toronto for Game 2, little did Stapleton or Dryden know that Canada, as a nation, was having a nervous breakdown.

“The game we want to forget,” said Team Canada defenseman Serge Savard with a tight grin. “The game we don’t want to talk about.”

If this series made Henderson a national icon for his winning goals in Games 6, 7 and 8, it was about much more than one man’s heroics. This was about two teams going at each other with hammer and sickle and tong, with Canada winning on Henderson’s dramatic goal with 34 seconds remaining in Game 8 on Sept. 28, 1972.

Sixteen million of 22 million Canadians watched the final game, scratchy television coverage beginning at 12:30 p.m. ET. Between 9:30 a.m. on the West Coast and 2 p.m. in Newfoundland, the huge majority of Canadians were gathered around TV sets at work and in classrooms, a country holding its collective breath.

A dozen or more books have been published in English about the Summit Series, many more including those in French and Russian. There have been scholarly theses written and documentaries produced; the latest of the latter is a film titled “Summit 72” that will premiere on CBC in Canada on Sept. 14, running in one-hour segments on four consecutive Wednesdays.

The new book by Dryden, a 75-year-old educator, lecturer and award-winning author, is one of a handful published for the 50th anniversary, his a deeply personal at-the-moment view of the series.

Savard, who with Larry Robinson and Guy Lapointe made up the Canadiens’ “Big Three” on defense in front of Dryden during the 1970s, views the Summit Series as much more than 480 minutes of hockey.

The Canadian and Russian teams shake hands after Game 8 in Moscow. Among the players here are goalies Ken Dryden (second from right) and Vladislav Tretiak (20). Melchior DiGiacomo, Getty Images

“It became a political series, and that wasn’t our fault. We didn’t want that,” Savard has said of the players. “The Russians were leading the series when we went over there and those guys wanted to show the world that their way of doing things was the right way, that their way of training was the best, that they had the best athletes in the world.

“All of a sudden, we woke up and said, ‘Hey, we invented this game, not you guys.’ Yet (Soviet leader Leonid) Brezhnev was sitting behind the net in one corner. It was political and we were caught in the middle of it.”

Political realities of the day have doused international reunion plans, no members of the Russian team coming to Canada to mark the half-century anniversary with members of Team Canada. But Dryden expects that they too will remember a series for the ages.