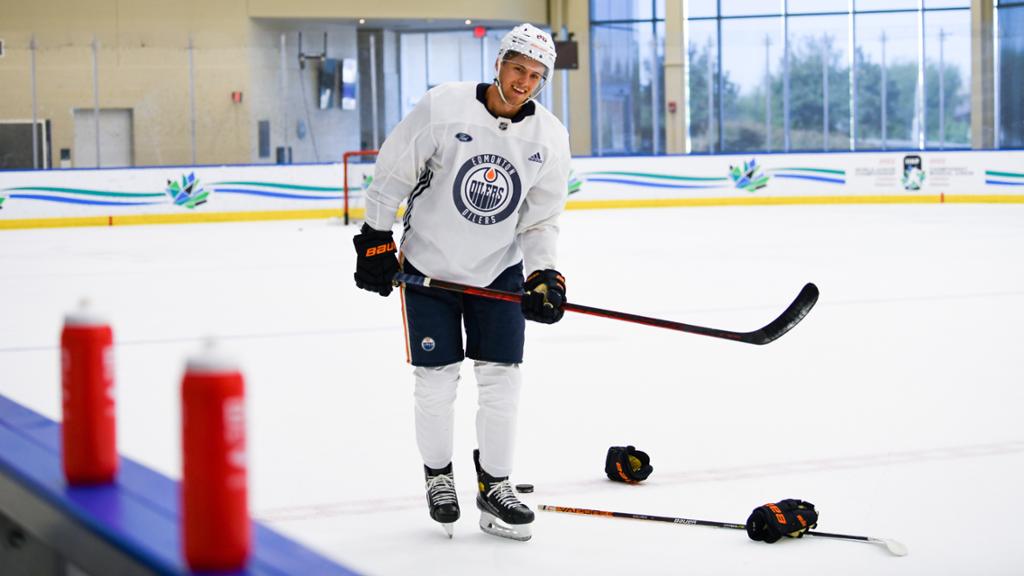 EDMONTON, AB – The cream of the prospect crop on the Edmonton Oilers blueline has been slowly percolating over the past handful of seasons.

Edmonton has a number of valuable prospects vying for a full-time role on the back end this coming season, with Main Camp set to become the proving grounds for one of them to seize one of the few spots available.

The retirement of Duncan Keith opens up the opportunity and potential for one of the club’s rookie rearguards — Philip Broberg, Vincent Desharnais, Markus Niemelainen and Dmitri Samorukov — to seize the spot as their own and round out a D-core that already includes Darnell Nurse, Cody Ceci, Tyson Barrie, Brett Kulak and Evan Bouchard.

In the cap-focused world of the NHL today, the importance of having prospects rising through the ranks can’t be understated, as was the message from Oilers General Manager & President of Hockey Operations Ken Holland to the team following the conclusion of the 2021-22 season.

“One of the things you need is an internal push,” he said in his end-of-season media availability. “You’ve got to dig in here in the off-season to come in here in September and push for a bigger piece of the pie, bigger responsibility, or bigger minutes whether you’re chipping in on the penalty kill or if you’re some young player like Broberg or Holloway trying to push to make the team.”

“I do plan that one of those young defencemen is going to be on our team for sure, maybe two. I told them that face-to-face at the end of the year. We’re trying to win and if I have to put someone back in the AHL or waivers, I’m prepared to do that.”

Each potential option possesses different advantages and has taken a different road in order to arrive on the cusp of cracking the Oilers roster, making the battle between young defenceman for a full-time role that much more intriguing to fans, teammates and even the coaching staff and management.

“I think everybody’s excited about the opportunity for these young D-men and the work they’ve put in to put themselves in a position to be in that conversation,” Head Coach Jay Woodcroft, who’s worked with all four defencemen either with the Oilers or the Bakersfield Condors in the AHL, said earlier this month on Oilers Now with Bob Stauffer. “I think all of them represent different skillsets, represent different ingredients, where they’re at in their personal cycle, how many years have been invested in them since their draft year, and everything like that.

“I can tell you that everybody’s excited about watching these younger guys try to battle it out for an NHL opportunity.”

Three of the four defencemen highlighted already have the experience of appearing in an NHL game, but each one of them possesses solid professional experience from the last few seasons that boosts their development and bolsters their cause of securing full-time NHL status this coming campaign.

Broberg, a 2019 first-round draft pick in his first full season on North American soil, split time between the NHL and AHL last season and appeared in 22 games for the Oilers — scoring his first NHL goal against the San Jose Sharks and making a post-season appearance in Round 1 of the Stanley Cup Playoffs against the Los Angeles Kings.

The defensive side of the puck is where Broberg has put the majority of his focus this summer in hopes of becoming a more-rounded player and securing a full-time spot this season.

“Obviously it was my first year over here last year, so everything was kind of new and I didn’t really know what to expect,” the Swede said. “It was a good learning year for sure, and to get a few games as well and get a game in the playoffs, that was good experience for this year.

“I’ve been really working on getting stronger to get better in the D-zone. I think it’s been working so far, so I feel in really good shape for the start of camp.”

Niemelainen’s AHL contributions and acceptance of tough matchups with the Condors last season soon awarded the Finn the opportunity to suit up for 20 games at the NHL level last season, earning high praise from the coaching staff for his physicality and attention to defensive details. Conversely to Broberg, improving offensively has made up the most of his off-season work.

“It was fun. A little bit nervous at the start, but I think I played pretty well and we’ll just try to improve from last year,” he said. “My defending was pretty good, but there’s still a lot of work to do playing with the puck and just to be cleaner with the puck. I’ve been working on that a lot and hopefully it’s better than last year.”

Samorukov battled injury at the beginning and end of his third full professional season, playing 51 games for the Condors and recording three goals and 18 points, but made his NHL debut against the St. Louis Blues at the turn of the new year.

Being waiver eligible this season, the Russian has prepared himself to make the jump to becoming a full-time option for the Oilers and prove to both himself and the organization that he’s the right man for the job.

“You have to put yourself back into great shape and prove you can still be the best one,” he said. “It’s always a battle. Everybody wants to come and prove they’re the best. My job is pretty simple — just prove I’m the best. Mindwise, I’m ready and it’s going to be fun and really exciting.”

Desharnais, at 26 years old, has slowly risen into the conversation after being drafted by the Oilers in the seventh round of the 2016 Draft and working his way up through four years in the NCAA with Providence College and four seasons split between the ECHL and AHL.

Last season was a breakout year for the Laval, QC product, who played big minutes shorthanded and at even strength for the Condors over 66 games and registered a league-leading +36 plus/minus.

The quartet of prospect defencemen have shared locker rooms and pairings in the AHL with the Condors, development camps in Edmonton, and consider themselves all close friends off the ice who’ll leave emotions out of it when competing on the ice for the chance to earn a spot in Edmonton’s opening day roster.

“I think guys know. We’re not stupid,” defenceman Vincent Desharnais said. “We’re all professionals here and we know we’re all fighting at the same spots, but we’re all friends who’ve played together and played on the same pairings.”

But as is commonplace in hockey and professional sports, competition can be healthy and bring out the best in any group.

“I think competition is good,” Broberg said. “It pushes the guys a lot and I think every year there’s a lot of competition.”