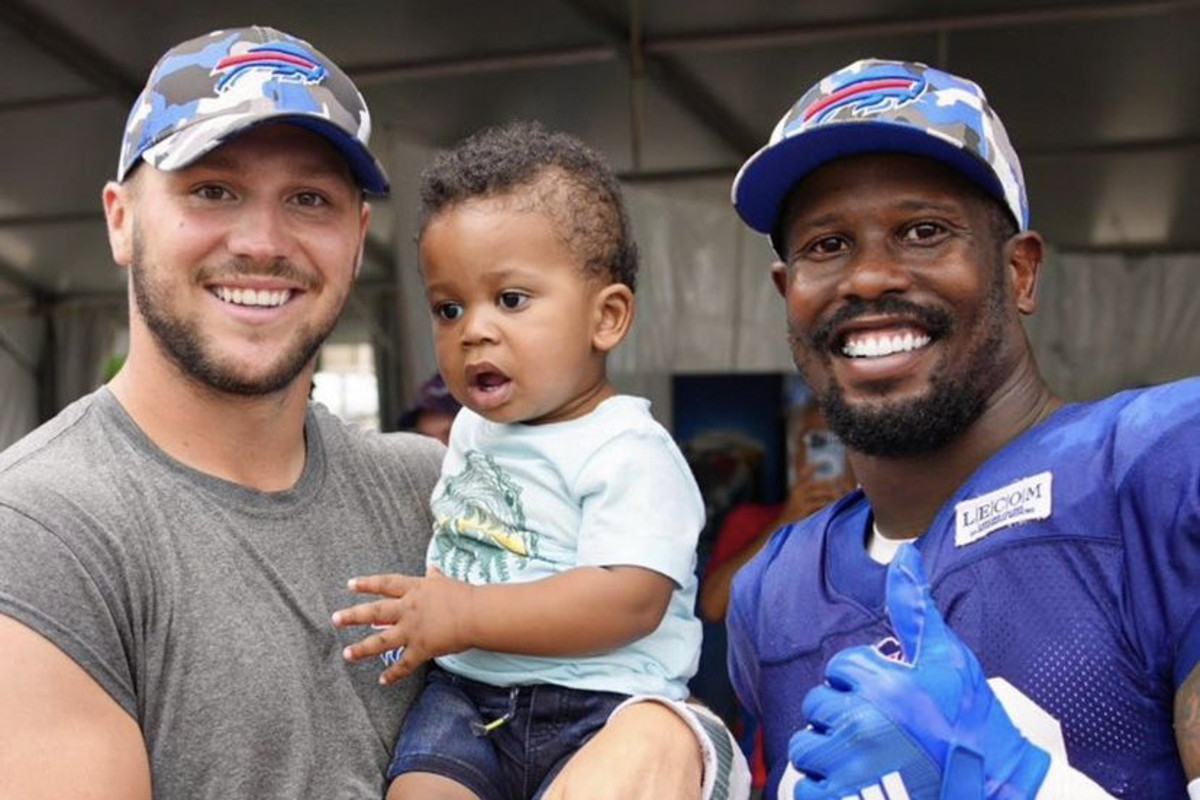 The Buffalo Bills have announced their captains this season, a total of nine leaders getting the honor. The names:

The Buffalo Bills have named 13 players to their initial practice squad, most of whom were cut ahead of the 53-man roster. Here’s a look at the practice squad …

The practice squad used to be reserved for young players only, but this team features several veterans including quarterback Matt Barkley, wide receiver Tavon Austin and running back Duke Johnson.

Adding these veterans signals that the Bills want as much veteran experience as possible going into the season and value that as they hope to hoist the Lombardi Trophy this year.

AUG 30 BILLS DOWN TO INITIAL 53 The Buffalo Bills have released 17 players to reach their first 53-man roster in preparation for the 2022 season.

Defensive tackle Eli Ankou was waived with an injury settlement.

2020 sixth-round pick Hodgins recorded 124 receiving yards on 16 receptions but was ultimately crowded out of a strong receiving corps.

Blackshear was a real surprise this preseason with 24 carries for 116 yards and two touchdowns, receiving for a further 93 yards on eight receptions. As was the case with Hodgins, Blackshear fell victim to a deep running back room.

This move leaves the Bills with eight active wide receivers.

AUG 30 OJ AND DUKE ARE OUT Buffalo is releasing veteran running back Duke Johnson, per an ESPN report – which means Zack Moss isn’t getting traded.

Nor is OJ Howard getting traded, as the vet newcomer is also being released.

AUG 29 ROSTER TRIMMING BEGINS As the Buffalo Bills begin to trim their roster to hit the 53-man marker by Tuesday, the first six to go have been named.

Punter Matt Araiza was waived on Saturday after allegations came out alleging his involvement in the gang rape of a 17-year-old while at San Diego State last October.

Oh, and as predicted, the Titans just cut Brett Kern, the Pro Bowler and Buffalo-area native.

We say there’s your guy.

AUG 25 CAP ROOM MOVE Bills GM Brandon Beane said a financial move would happen, and now it has: Buffalo has restructured the contract of left tackle Dion Dawkins, converting the bulk of his $8.13 million base salary into a signing bonus.

This is a bookkeeping issue, not a “sacrifice” on anybody’s part. But in the end, the Bills gain $5.6 million in cap room.

And yes, it’s fair to speculate that a move like the signing of Odell Beckham Jr. can be part of a future plan here.

As the Bills shrink their roster down to 80 players ahead of Tuesday’s deadline, 10-year veteran wide receiver Tavon Austin was cut early Monday morning.

Austin, the 8th overall pick in the 2013 NFL Draft, hasn’t exactly lived to his pre-draft expectations but he has stayed on in the league for a decade with his speed and versatility.

Unfortunately for Austin, he was competing against a talented Bills receiving corps headlined by Stefon Diggs and Gabriel Davis, meaning his opportunities to shine were limited.

“Our hearts go out to Dawson and his family at this time, and we’re right there with him and supporting him and his family,” coach McDermott said. “Just tragic news that I woke up to this morning. We love him and we support him and just unfortunate news this morning.”

The cause of death has not been revealed.

AUG 16 CUTS MADE The Bills are already thinning out the roster just one preseason game in. Buffalo has released cornerback Tim Harris and linebacker Marquel Lee.

AUG 7 FB SIGNS The Bills are signing fullback Reggie Gilliam to a two-year extension worth up to $5.2 million, as first reported by NFL Network. The deal keeps the former UDFA from entering restricted free agency next spring.

AUG 5 FORMER BILL KIKO ALONSO SIGNS WITH SAINTS Former Buffalo Bills linebacker Kiko Alonso is back in the NFL after signing a contract with the New Orleans Saints.

Alonso was drafted by the Bills in the second round of the 2013 NFL Draft and played two seasons in Buffalo before he was traded in 2015 for running back LeSean McCoy.

AUG 2 DOLPHINS PUNISHED The NFL has just came down hard on the Miami Dolphins over the subject of tampering. .. and for general violations of “integrity of the game.”

Owner Stephen Ross is suspended through October 17 and has been fined $1.5 million.

The Bills released cornerback Travon Fuller with a waived/left team designation today. He’s free to be claimed by any team, but a source tells reporter Ryan Talbot that “Fuller appears to be done with football.”

The 6-1, 180-pound Fuller finished at Tulsa last year and signed with Buffalo as a UDFA.

He was moved to make room for Jordan Miller (6-2, 190), who was selected by the Atlanta Falcons in the fifth round of the 2019 NFL Draft and was most recently with the Saints.

Originally signed as an undrafted free agent in 2017 by the Raiders, Simmons eventually made his way into the rotation for the Seattle Seahawks in 2018 and 2020, playing in 20 games and starting nine. He did not play in 2019.

Simmons then moved on to the Las Vegas Raiders, where he played in five games in 2021.

The Buffalo Bills are back in training camp, fortified by the presence of two Josh Allens. … Well, actually, a fan who dressed out like the Bills QB, helmet and all.

The Bills’ camp tickets are hard to get, so this fella is fortunate in many ways. He’s got his pass. He’s got his team. And he’s ready to be inserted into the workout if coach Sean McDermott calls on him.

The entire squad has reported to camp for Bills, per head coach Sean McDermott, who also announced some moves and offered updates.

Guard Rodger Saffold will begin camp on the NFI list after injuring his ribs in a car accident.

Cornerback Tre’Davious White (ACL rehab) is being moved to the PUP list but is “on schedule,” McDermott said. Read here for more.

Ike Boettger and Eli Ankou will also begin camp on the PUP list.

Safety Jordan Poyer has said all the right things as he is vying for a new contract, and in addition to being at camp on Sunday … his agent Drew Rosenhaus is also present. Read here for the latest.

JUNE 24 GREAT EXPECTATIONS What does McDermott think of the “white noise” of Bills expectations? Not much, as you can read here.

Nearly two hours after the 4 p.m. deadline for NFL teams to trim their rosters to 53 players on Tuesday, the Bills announced their roster moves, which included the jettisoning of tight end Jacob Hollister and long snapper Reid Ferguson, though the Ferguson release was simply a procedural move, general manager Brandon Beane confirmed Wednesday.

Wide receiver Isaiah Hodgins also was the odd man out in an outstanding battle for the final wide receiver spot that was won by Jake Kumerow.

Here’s how everything has transpired so far:

The Bills on Wednesday announced a 15-man practice squad composed entirely of players they cut and made no waiver claims whatsoever for players to fill any spots on their active roster.

Those decisions are the best indicator of how strong general manager Brandon Beane and coach Sean McDermott believe the collection of players they’ve assembled this year are.

This leaves room for one more player.

The team officially moved to re-sign Ferguson to the active roster after announcing rookie wide receiver Marquez Stevenson will be placed on the injured reserve list.

In their most surprising move, at least on the surface, the Bills have released TE Jacob Hollister.

However, because he’s a vested veteran and not subject to the waiver process, they could well have a handshake agreement to re-sign him after some players land on the injured reserve list.

Reports of many others being let go have trickled in well before the deadline.

Safety Josh Thomas is one of them.

This was after they cut RB Kerrith Whyte, WR Brandon Powell, and CB Tim Harris.

The Bills have a long way to go before their season opener against Pittsburgh on Sept. 12. So their roster could be altered numerous times before then.