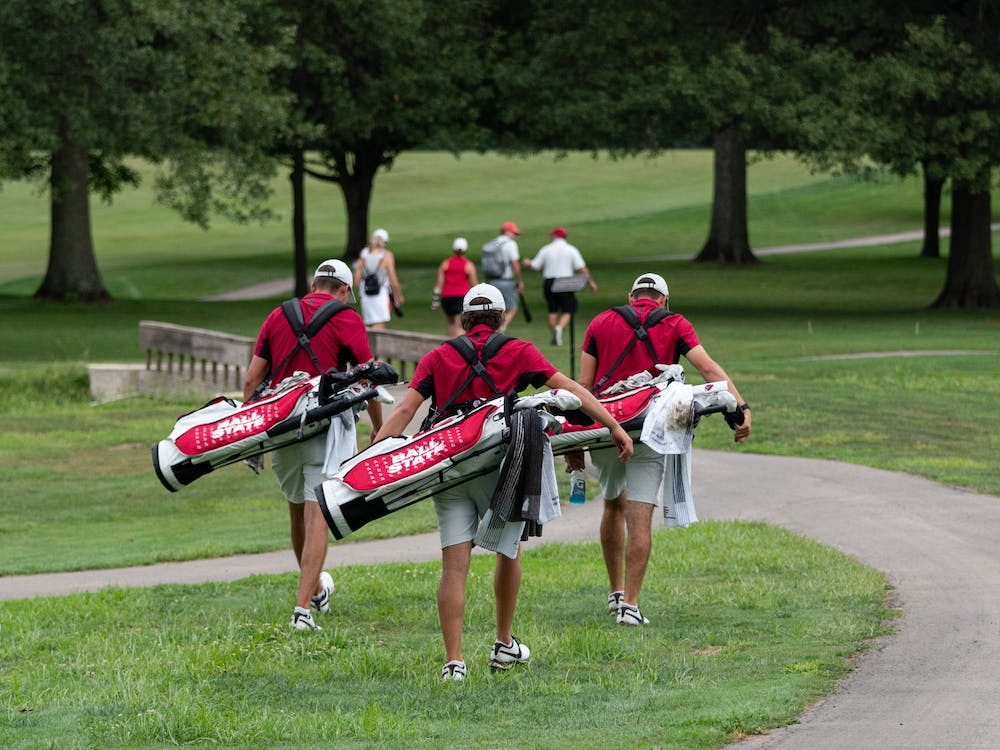 Ball State men’s golf team placed second out of 15 teams in the Earl Yestingsmeier Invitational Sept. 2-3 with a score of 19-over-par [859] for two combined days, trailing Wright State by 13 strokes [846].

Redshirt sophomore Griffin Hare finished tied for 8th with a 6-over-par performance, and senior Joey Wiseman finished tied for first with a 2-under-par showing. Wiseman would lose in a four-hole playoff to Mikkel Mathiesen from Wright State.

Delaware Country Club was the home of the invitational, a par 70 and a course length of 6,438 yards.

“[Since] it is a home course, we have really good knowledge of this place, these guys are comfortable because several have played many rounds out here,” head coach, Mike Fleck said. The thing that makes Delaware deceivingly tough is its treeline, the greens have a lot of slopes and the hole locations can be pretty tricky. The combination of having to drive the ball pretty accurately, and having to be precise with wedges around the greens makes it challenging to shoot really low numbers.”

Ball State started off the weekend by playing 36 holes on Friday. Round leaders were graduate student Joey Ranieri, who shot 72 and 67, as well as sophomore Kash Bellar who shot 69 and 73.

The Yestingsmeier Invitational is the only tournament Ball State hosts in Indiana.

“To be able to sleep in your own bed is always nice,” Ranieri said. “To play a course you get to play almost every single day. Sometimes it can be a little redundant but to be able to play it in a competitive setting with all the families watching and to be able to have a lot of Ball State supporters makes it special.”

The Cardinals led the field with four eagles and boasted the best par four average of 4.12 throughout the tournament.

Wiseman had a fortunate turn of events on the third and fourth hole of the day, with back-to-back eagles to shoot him up the leaderboard.

“Coach Fleck and I were talking through the shot on three, [it was] 265 or 260, I was thinking low driver and he was thinking 5-wood,” Wiseman said. “I hit the high 5-wood, I was going to take the trees out of play with the driver but he said he thought 5 wood. Hit it and luckily it didn’t hit the trees.”

During the last round, Ball State was within one stroke with 8 holes left but was unable to convert the momentum into a team win.

“We were close with about 8 holes to play and we closed the gap, unfortunately, it did not go our way,” Fleck said. “We will analyze that and break that down but I think honestly today is about celebrating Joey Wiseman with a career-low final round and co-medaling. We are going to celebrate the victory of him playing really well and putting himself in a playoff.”

Ball State was able to see MAC competition this week as well, beating Central Michigan by 30 strokes, and Ohio by 40 strokes.

The Cardinals will continue their season on September 12 at the Streamsong Invitational in Bowling Green Florida.

“It is good to finish well at home, but there are definitely some things we have to button up,” Fleck said. “I think we had some feelings today that we haven’t experienced in a while, those got exposed a little bit relative to how we finished down the stretch. I feel good about our guys and our group.”

PGA Tour, LIV won’t come together — and they can’t co-exist