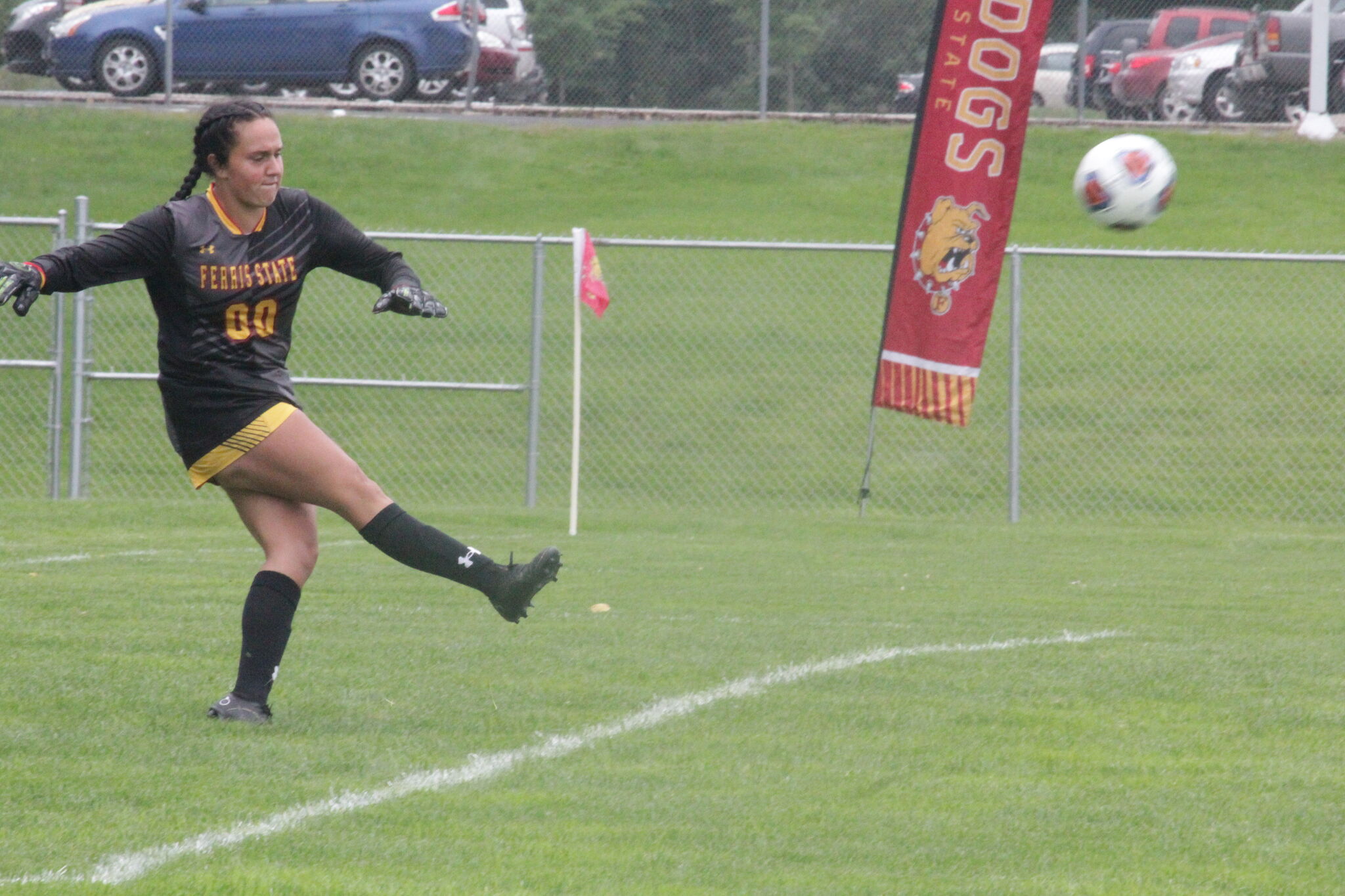 BIG RAPIDS – The nationally No. 17-ranked Ferris State University women’s soccer team secured its first win of the season, shutting out the Walsh Cavaliers 2-0 at the Bulldog Soccer Field on Sunday.

Ferris State senior Isabella Zamborini netted both Bulldog goals in a strong offensive performance where she paced the Bulldogs with four shots.

The Bulldogs jumped out in front at 9:39 when senior Nikki May sprung Zamborini free on a long service down the middle, where Zamborini held off her defender and ripped off a shot labled for the top right corner for a 1-0 Bulldog lead. Zamborini’s goal was her first of the season while May earned her first helper of the year.

Midway through the half, Zamborini was played in deep by junior Brinley Bell. Zamborini fired a shot off the hands of Walsh goalkeeper Romina Parraguez that spun into the open net for her second of the day and season. Bell earned her first point as a Bulldog on the goal.

In a stout defensive effort, the Bulldogs did not allow a shot on goal on the day. Ferris State in fact only allowed one shot attempt to the Cavaliers over the last 65:27 of action. The Bulldogs had a 21-5 advantage in shot attempts and 6-1 lead in corner tries for the day.

For Ferris State, sophomore goalkeeper Darya Mosallaei earned the win and the shutout. The shutout is the 13th of her career, moving her alone into third place all-time in program history. Parraguez took the loss for Walsh, making three stops and allowing both goals before being lifted at half time for Lilly Lakuszewski.

The Bulldogs carded a two-round 598 score on Sunday at The Meadows Golf Course, shooting +30 for the 36 holes of action. FSU carded a 300 in round one and came back with a 298 in the second 18 holes of competition.

FSU presently sits 13 shots off the lead as host GVSU fired a two-over par 570 figure. Findlay is second overall at 581 (+13) with Northwood one shot in front of FSU at +29 overall. A total of 12 teams are taking part in the field.

Finally, Caleb Bond is tied for 44th overall after two rounds with a 155 figure, shooting a 80 in the opening round and a 72 in the second round.

The Bulldogs also have three golfers competing individually with Nathan Kraynyk tied for 34th at 154 overall on rounds of 74 and 80 followed by Colin Beckett in a share of 53rd place. Becket posted a 79 in the first round and a 78 in round two. Meanwhile, Zach Gildner shot a 80 over the first 18 holes and a 78 in the second round for a 158 figure, which is tied for 59th place overall.

The final round of action was set for Monday.

The Bulldogs capped off the tournament with back-to-back wins after previously knocking off nationally 14th-ranked Colorado Mines in Friday afternoon action. Missouri S&T entered the tournament receiving votes in the national poll.

Ferris State took the opening set of Saturday’s invitational finale 25-23 and then posted identical 25-17 margins in both the second and third sets to capture the win. The Bulldogs hit an impressive .324 overall for the contest.

Sophomore Olivia Henneman-Dallape led the Bulldogs with 15 kills in the match while both Chelsie Freeman and Syann Fairfield tallied eight kills each and Emma Bleecher added seven kills.

FSU finished the contest with 45 kills and only 12 attack errors on 102 attempts in addition to notching 46 digs and nine aces. The Bulldogs also had eight block assists.

Ferris State will open Great Lakes Intercollegiate Athletic Conference play back at home on Friday as FSU hosts Wisconsin-Parkside in the home opener starting at 7 p.m. inside Jim Wink Arena.