Hello everybody and welcome! The 2022 MLB season is heading towards the home stretch and we here at RotoBaller have you covered with some terrific plays from our friends over at PrizePicks.

PrizePicks is a great DFS fantasy picks site where you can choose to select plays in terms of fantasy points or single stats. The goal is to build a 2-player, 3-player, 4-player, or 5-player entry and then select whether or not you want to play for the power play or the flex play. On the power play, you will need to be correct on each of your selections to win, and on the flex play, you will have a little more wiggle room for a chance to win some money back.

Our partners at PrizePicks offer some of the best, and easiest to win, MLB DFS games in the industry. There are no large-field tournaments filled with sharks where you have to get lucky just to place. At PrizePicks, you’re not playing against other people, you’re just playing against the projections, and the guys at PrizePicks have worked hard to give you really attractive opportunities to make some money. With promo code ‘BALLER’ you can get a 100% match on your deposit up to $100.

PrizePicks has two types of games. The first type of game is known as Fantasy Score, which consists of selecting various players and trying to determine if they will go over or under their projected fantasy points in a game. The second game is known as Single Stat. For MLB, Single Stat consists of pitcher strikeout props in which you determine if the pitcher in question will go over or under their projected strikeout total. You can mix and match players from each type of game in your entry or select all of your plays from the same type of game. Once you have selected your players and props, you can choose the aforementioned flex play or power play option. Let’s see what the board offers today!

Kevin Gausman over 6.0 strikeouts- Gausman hit a rough patch in the middle of the season, but he has been rolling lately, having racked up six or more strikeouts in each of his previous three starts and seven of his previous nine starts. He will be facing the Orioles, who have posted the fourth-highest K rate vs. righties over the previous two weeks with a rate of 25.5%.

Lance Lynn over 6.0 strikeouts – Lynn is another guy that has been on a roll lately as he has hit or exceeded this number in four consecutive starts, including a six-strikeout performance against the pesky Guardians, who have one of the lowest K rates against righties in baseball. Today, he will be facing the Mariners, who have posted a K rate of 23% vs. righties over the previous two weeks, which is ranked in the bottom half of baseball. Lynn has also managed to pitch at least six innings in five of his previous six starts, which should help him get to this total.

Tyler Alexander over 3.0 strikeouts – This once could be dicey, so take it as a grain of salt, but Alexander is capable of reaching this number as he has done it in two consecutive starts and has eclipsed it twice in his last six starts. He has the best matchup on the board for lefties today as the Angels are posting the highest K rate over the previous two weeks with a rate of 35.1% while posting just an 80 wRC+ mark over that same span.

Andrew Heaney over 6.0 strikeouts – THis number will likely move to 6.5 this morning, but it can still be played even if that happens. Heaney has struck out seven or more in each of his previous three starts and four of his previous six starts. He gets the Giants in this one, who have posted a 29% K rate over their previous 100 PA against lefties, which is ranked fourth-worst in baseball. He also managed to mow down seven Giants in his first start against them back on August 1st. 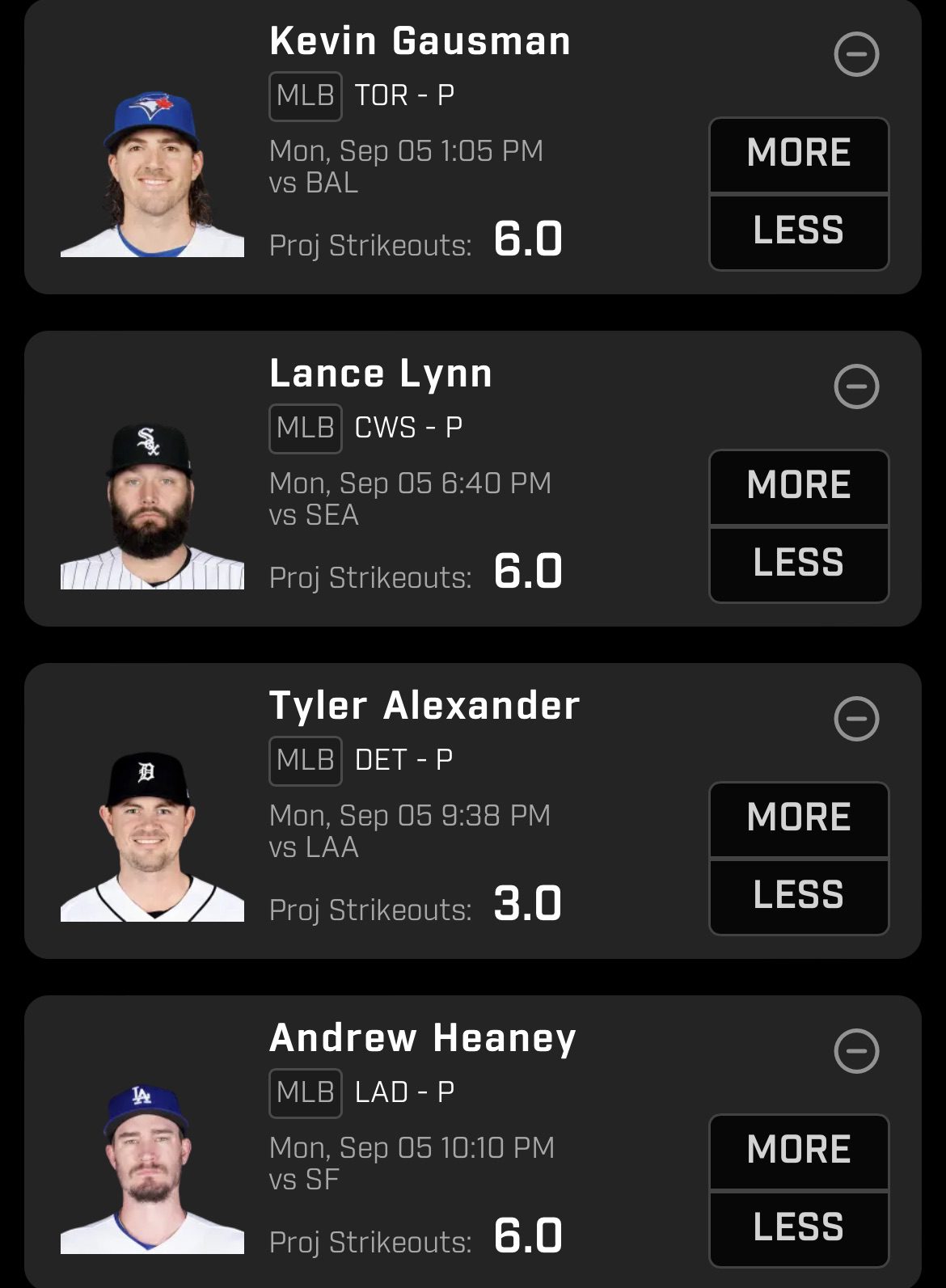 Like what you see? Download our updated fantasy baseball app for iPhone and Android with 24×7 player news, injury alerts, sleepers, prospects & more. All free!