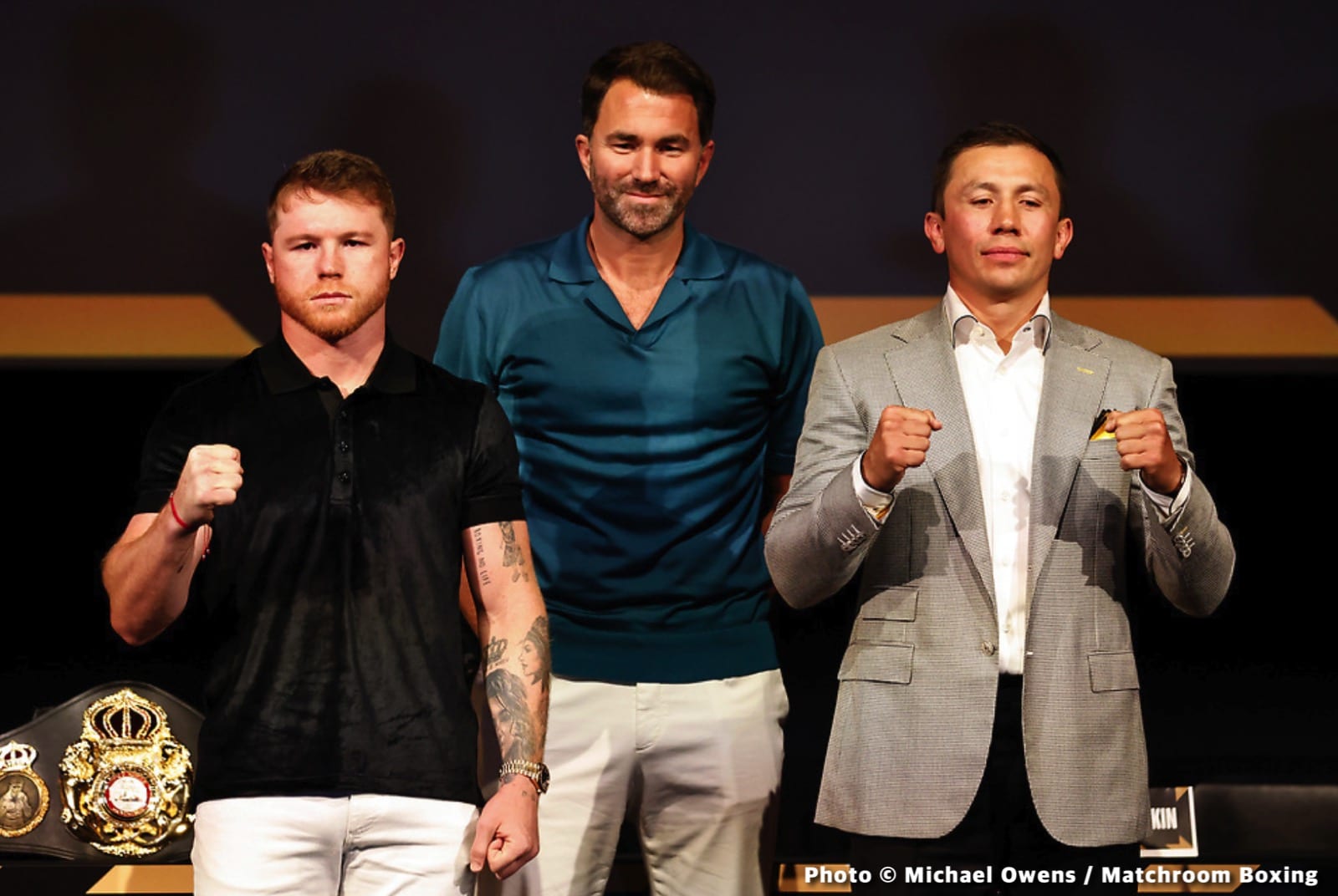 By Sean Jones:  Gennadiy Golovkin’s trainer Johnathon Banks says they plan on neutralizing the ability of Canelo Alvarez to counterpunch when they meet for their trilogy fight on September 17th in Las Vegas.

Canelo (57-2-2, 39 KOs) found a lot of success countering Golovkin’s single jabs by landing right hands over the top in their rematch four years ago in 2018, and they want to make sure that doesn’t happen again.

Banks says they plan on doubling & tripling up on Golovkin’s jabs to take away Canelo’s ability to counter. This is what WBA light heavyweight champion Dmitry Bivol did last May, and it worked perfectly.

Canelo was afraid to counter because Bivol was firing multiple jabs, as well as combinations. It’s a little surprising that it took Golovkin’s training team so long to figure out how to take away Canelo’s counter punching because if you watched the first fight, you could see that GGG had his best success in the fight when he let his hands go in combination form.

Canelo would either stop countering or he was getting overwhelmed with punches and couldn’t keep up with the incoming.

Bivol’s training team were wise enough to spot this weakness in Canelo’s game they took advantage of it by throwing sustained combinations as well as doubling & tripling up on his jabs.

Golovkin has got to win this fight if he wants the chance to fight Canelo a fourth time because if he loses, it would give Canelo a 2-0-1 advantage in their three-fight series.

“Canelo is a strong, aggressive, strong, accurate puncher, but some people also forget that he’s also a good counter puncher,” said Teddy Atlas on The Fight. “Is there anything you can tell us about how you prepared to offset his ability to counter punch effectively?”

“I think it’s in the traditional sense. If you and I are in the gym looking at somebody jabbing and getting countered, the first thing we would tell them is, ‘Hey, double and triple your jab. That stops the counter,” said Golovkin’s trainer Johnathon Banks.

“It’s interesting that I asked that question, and you came right with the obvious with the fight answer because there were obviously spots, and you weren’t with him,” said Atlas.

“There were spots in the second fight where Canelo was countering him with the right hand over the jab, and it was obvious why because he was being successful, GGG, with the jab.

“So, one way to take away the jab is to counter with the right hand, and Canelo was doing that. So, I guess you just spoke on that, really, but I think that’s got to be a pretty big part of your game plan to deal with that.

“To deal with those spots where Canelo will look to counter with the right hand, as he did in the second fight,” said Atlas.

“100%, but that is obviously a little bit of the focus because the counter with the right hands over the top, it’s not such a big influence that the whole, that we got a whole course on it.

“Therefore, if he [Golovkin] has the rhythm like I want him to, and he doubling that jab and pulling back and tripling that jab, that’s going to throw the counter so far off that now he’s [Canelo] got to put his hands up and start coming. Once he don’t get that counter,” said Banks.

“Once that jab gets doubled, he’s got to come with something else,” said Banks about Canelo.

“Teddy touched on it earlier that the first two fights, that he thought GGG won them both,” said Ken Rideout. “Certainly, the first, most people feel that first.

“Does it enter your mind at all that you have to knock him [Canelo] down several times or out to get this win because Canelo is the golden goose, right? GGG is getting close to the end of his career.

“I think the establishment probably benefits more from Canelo getting the decision, and we’ve seen every indication that will be the case for every fight that’s close.

“Bivol beat him in almost every round. They couldn’t avoid that one. Is that something you guys think about and consider in the preparation for the fight?” said Rideout about Golovkin.

“We think about all the scenarios,” said Banks. “Need a knockout, but when I sit with the fighter one-on-one, I don’t talk about the knockout. I don’t talk, ‘You have to.’ I don’t talk like that.

“We talk very basic, we talk about the strategy, and we talk about sticking to the program because there’s no roadmap to knocking this kid [Canelo] out. At least not yet.

“There’s nothing to say, ‘You do this, you definitely can knock him out.’ The goal is to win every round,” said Banks. “The goal is from round one; let’s start winning the rounds first, and let him [Canelo] start going for the knockout. So we can put the pressure on him.

“That’s reversing it. Putting the pressure on him. Let his corner [decide to go for the knockout]. That’s the thing. When you have such a good fighter like him, if you can disrupt the corner, then you can get in the fighter’s head and force him to do something that he wasn’t ready to initially do at that point.

“That’s how you’re able to get other things happening that you may or may not want in the fight,” said Banks.

“I agree with you,” said Rideout.

“Control what you can control, but you cannot control the judges,” said Atlas. “I wish we could, but we can’t.”

“Just to be clear, I disagree with the whole judging thing, but I think that’s an inevitability that has to be addressed,” said Rideout.

“Just to get his fighter mentally, technically, and physically ready to do what he has to do to have the best chance to beat Canelo,” said Atlas.

“I know you have the right strength coach over there in Chris Camacho. He’s a good man,” said Rideout about Golovkin’s strength coach.

“He is, and you have the right PR man over there, Mr. Johnathon, with Fred Sternberg,” said Atlas. “Where is Fred? Does he allow himself? Oh, he’s working. We heard you.

“You’re always working. The best PR man in the business, Fred Sternberg. All right, Fred. Did I say everything you asked me to? No, pay me later. With all kidding aside, Johnathon. You’ve got nothing but good people in that camp.

“Fred and Chris and obviously Golovkin and yourself, you have all good people. I just wish nothing but good things for good people. I’ve always felt that way, and I’ll continue to feel that way until I’m not on this earth anymore.

“I appreciate that,” said Banks. “It means a lot to me, thank you.”

“Thank you, Jonathon. I appreciate your time, and best of luck. I would love to speak to you after you get the win in this next fight,” said Rideout.

“Thank you. I’m looking forward to it,” said Banks.

“Thank you, guys. I appreciate the time,” said Rideout.